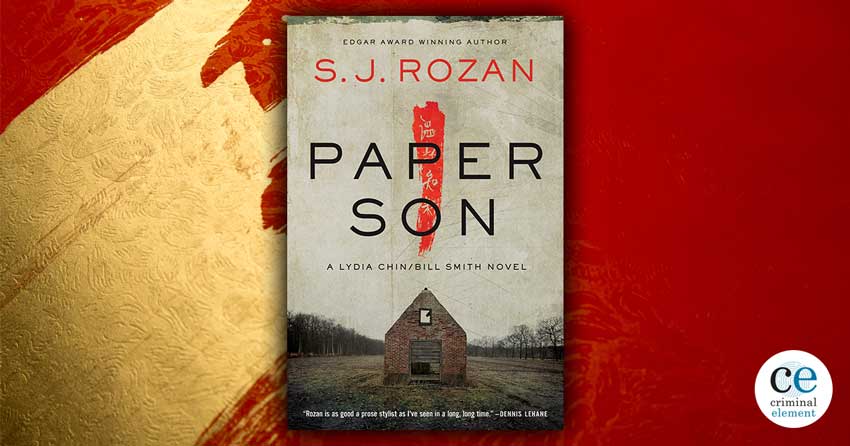 Paper Son by S. J. Rozan is the 12th book in the Lydia Chin/Bill Smith Mystery series, which takes the acclaimed detective duo into the Deep South to investigate a murder within the Chinese community.

In Paper Son, the newest of S. J. Rozan’s Lydia Chin and Bill Smith mysteries, Lydia’s mother surprisingly asks her daughter to go to the Mississippi Delta to help a relative accused of murder; surprising because Lydia’s mother has never approved of her daughter’s profession.

My mother’s attitude toward my PI career has zigzagged from disgust, disapproval, and attempts at deterrence to, on good days, a kind of pointedly exaggerated patience, a showy expectation that I’ll get this out of my system and turn to a pursuit worthy of a good Chinese daughter. That she would bring me a case and demand I take it is something I never would’ve imagined five years, or five minutes, ago.

Not only is the case one of murder but both the accused and the victim are cousins of which Lydia has never heard. But her mother is convinced Jefferson Tam is innocent of killing his father—despite being found with a bloody knife in his hand and his father’s corpse at his feet—because he was a relative of her husband. In her opinion, her husband was almost a saint, so anyone related to him could not be guilty. Even though Lydia did not know these cousins—didn’t even know they existed—her mother feels it is her duty to solve the murder.

Yes, Chin Song-Zhao’s descendants qualified as my cousins. Something like my fourth cousins three times removed, but we don’t cut it fine like that. Older relatives who aren’t your grandparents are your uncles and aunties. Besides them and your nieces and nephews everyone else is a cousin.

After meeting another previously unknown cousin, Captain Pete Tam, Lydia and Bill go to Leland Tam’s store where the murder took place. But when they arrive, the store and the house attached to the back have been trashed.

Rows of shoulder-high shelves started a few feet from the counter and ran toward the back. Without much merchandise, though: most of that lay in tumbled wreckage on the floor. Jelly jars and cans of yams, bottles of cooking oil and bright red hot sauce, chip bags and flour sacks huddled together, some intact, some leaking their contents in a crumbly gummy mess. Faded photographs of sampans and mountains, pagodas and temples, had been ripped from their spiderwebbed glass frames and sat on the rubble like leaves on trash piles.

Bill Smith’s first question: who hated Leland Tam? The only ones Captain Pete can think of is the McAdoo family—Old Miz McAdoo and her sons, Trevor and Tremaine. But none of them, as far as anyone knows, had reason to murder Leland Tam.

… even them wannabe gangbangers around here mostly got love for Chinese. Chinese grocers carried a whole lotta sharecroppers through the Depression, and through bad crops in years after, too.

Bill Smith calls the sheriff about the break-in, a sheriff who is less than popular.

“Bert Lucknell.”  Bobby Lee Smith spat on the splintered sidewalk. “Every breath that boy takes is a waste of air.”

Sheriff Lucknell is not happy to find two New York City PIs on his patch and warns them off. As Lydia Chin and Bill Smith investigate, Lucknell pulls them into the headquarters several times. They begin to wonder if he is involved.

Or is Jefferson Tam truly guilty? It sure seems so when he escapes from prison and disappears.

The Chin/Smith investigation takes them to the drug-dealing Fergusons and to the younger members of this family who want to expand into online gambling. It brings Lydia to yet another cousin, Reynolds Tam, who is running for political office and is not thought to have much of a chance because of his Chinese ancestry.

There are some elements one would expect from a book about the South: the drug in question is meth, the southern sheriff (who may be both incompetent and crooked) is hostile to the Yankees, the racism is pervasive and blatant, but the twists and turns mean that nothing is what the reader expects—and the ending is a shock.

I loved the history in this book, and I learned quite a bit. For example, the meaning of paper son. After the railroads were built and the Chinese became the “Yellow Peril,” the Chinese Exclusion Act of 1882 was passed to end immigration. But the Chinese could bring over their families. Young men wanting to come to the United States would claim to be the son of a citizen—a paper son. Many Chinese gravitated to the Mississippi Delta. They liked the hot humid climate. And they set up grocery stores.

But my favorite part of this book is its message.  At its heart, this is a book about family, both near and far. For the Chinese—and the people in Mississippi—family is all-important. Family ties prove to be the critical piece of the puzzle.