Book Review: Palace of the Drowned by Christine Mangan

May 28, 2021
From the bestselling author of Tangerine, Christine Mangan's Palace of the Drowned brings the mystery of Venice to life while delivering a twisted tale of ambition and human nature. 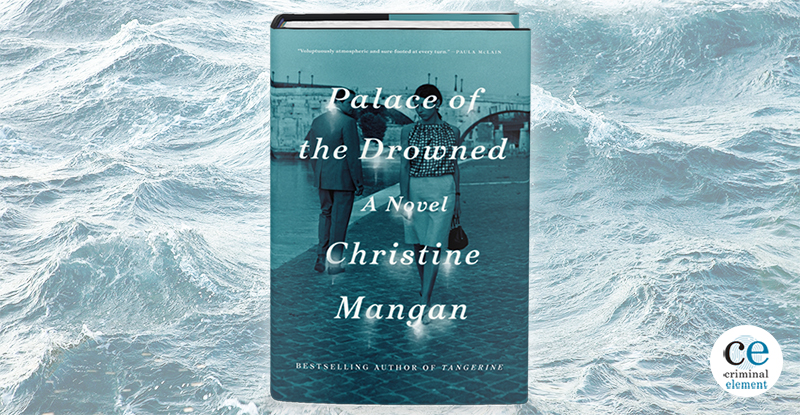 Frankie Croy was once a literary darling, her debut novel a smashing success both critically and financially. But in the ensuing decades, her star has never risen beyond the height of that initial book, and a particular review of her most recent release sent the author into an emotional tailspin culminating in a very public breakdown.

Desperate to escape London and the eyes of society, Frankie accepts an offer of sanctuary from her best friend Jack, whose family owns a palazzo in Venice. Maybe there Frankie can properly distance herself from what happened and recapture her old spark. Write a new novel that will fully redeem her.

But Venice, for all of its history and beauty, has plenty of darkness. It’s a place marked by death and decay—perhaps not the ideal retreat for an author struggling with her uncertain nerves…

Even the name of the palazzo itself seemed to portend something dark and ominous.

“The name?” Jack had asked, the first time Frankie had inquired. “It’s named after the family that first built it.” There was an edge to her voice, as though she hesitated to speak the next set of words. “Only, no one really knows it by that name anymore.”

“Oh? What do they know it by, then?” Frankie asked, suspicious now of her friend’s tone.

“It’s silly—and the story behind it is probably not even true. In fact, part of me used to wonder, and still does, quite frankly, whether my father didn’t make the whole thing up just so that he could keep us playing too near the watergate. Isn’t that what fairy tales are for? To warn children?”

“And what exactly were they warning you against?” Frankie demanded.

Jack hesitated. “Drowning. My father used to say that his Venetian friends called the palazzo by the name Ca’ de la Negà. Palace of the Drowned. The story is that the wife of the man who previously owned the palazzo drowned there. He found her floating in the canal, just outside the watergate, apparently. Whether it was accidental or otherwise, I don’t know. Listen, it’s all just a bit of nonsense, I’m certain. And besides, I can’t imagine any person less inclined to believe in ghosts than you, Frankie.”

Still, Frankie finds herself liking Venice far more than she expected to. Soon, she’s falling into comfortable routines while enjoying the novelty of the different customs and foods. And, to her great relief, she also finds herself writing again, with a passion she hasn’t felt in ages.

Then she meets Gilly.

The young woman claims to be the daughter of an old acquaintance, but somehow that doesn’t ring true for Frankie. She calls the palazzo to arrange a coffee date when Frankie knows she didn’t give her the number—she didn’t even know the palazzo had a telephone. And the more time she spends with the intense girl, the more disquieted Frankie becomes.

Just what is their connection? Was their meeting actually a coincidence, or something more? What are Gilly’s true intentions?

Palace of the Drowned is an aptly named thriller. Not merely in a literal sense—the story unfolds in the fall of 1966, when the floating city suffered a devastating flood—but on a psychological, atmospheric level as well. From the very first page, Mangan’s new release pulls us in and steadily overwhelms us with uneasy tension, until we’re struggling to breathe…

Protagonist Frankie is very much a woman treading water, frequently in danger of going under. She lives a claustrophobic, lonely life out of choice, but there are a handful of people she clings to like life preservers: closest friend Jack, Jack’s husband Leonard, longtime editor Harold. She’s well aware of how tenuous and small her existence is, but she truly can’t imagine living any other way, being an introverted hermit by nature.

The truth, she knew, was that women occupied a liminal space within the history of literature—within history itself, when it came to it—and she did not want herself further marginalized by her mistake. She wanted to be able to claim her own name, her own story, for her volume to sit among those of other men, other women, and to know that, wherever she was, ephemera or otherwise, she would be able to stand by those words and phrases that made up her work, that made up her.

She would not lose control of her own narrative, would not allow herself to be erased by this other voice. She was still here, still mattered to someone, surely. I still matter, she told herself, the reassuring words washing over her—no, skipping over her—so that she did not feel them. They were a tease, a taunt, one she could not grasp within her hands.

The entrance of Gilly is like a tidal wave, throwing Frankie into a spiral of confusion and high emotion, and Mangan pours on the suspicion in their shared scenes. Like Frankie, we never feel as though we have a firm footing when Gilly appears; we analyze and second-guess everything she says, looking for cracks and explanations, just waiting for the drop.

The tense dynamic between Frankie and Gilly has shades of The Talented Mr. Ripley—fitting, considering the text itself references Patricia Highsmith early on—while the shadowy Venetian setting adds a thoroughly Gothic air to the proceedings. The second half of the crumbling palazzo is unoccupied, everyone insists, but Frankie knows she’s seen lights in the rooms at night. She’s heard footsteps and doors closing. She’s seen a human figure outlined in the window, and a man across the courtyard in the rain.

At least, she thinks she has. But could it all be nerves? Her imagination working overtime, after she heard the spooky origin of the palazzo’s name? Or is there something sinister, even dangerous, happening next door?

Between the mysteries, Mangan leaves room for some powerful emotion about the nature of creativity—

She had felt possessed, as if something had caught hold of her and refused to let go until it had extracted each and every last word that had been circling inside of her since the start of the war…

[She] waited for that same feeling the first novel had elicited from her — that urgent need to write, to put pen to paper, as if she might burn up and disintegrate into dust if she didn’t get it all down fast enough.

—and the emotionally fraught toll the publishing industry has on a writer, the constant need to meet or, better yet, exceed expectations with each new volume. The unending push and pull between criticism and praise, the destructive power of words and public opinion, and how all of that can push someone beyond their own limits and rationality.

Palace of the Drowned is a meaty psychological thriller perfect for fans of Highsmith and du Maurier, so vividly described you can smell the briny air of Venice. It’s a slowly unfolding tragedy that seems painfully inevitable, even destined, by the end. Like receding floodwaters, this one will leave a mark sure to linger for weeks to come.