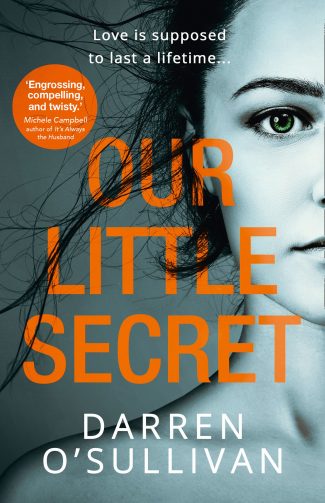 Our Little Secret by Darren O’Sullivan opens on a train platform where Chris plans to take his own life until Sarah inadvertently stops him. Sarah obsesses over the secrets that she learns Chris is hiding, but Chris tries to protect Sarah because some secrets are meant to stay buried…

How far would you go to be reunited with the love of your life? Would you cross the ocean . . . pay an unseemly amount of money . . . throw yourself in front of a moving train? Our Little Secret opens with the latter as Chris Hayes awaits the arrival of the train that will mark the end of his life, and the beginning of his reunion with his wife.

He looked again at the clock, it still read ten thirty-nine, and he still had eight minutes. Just eight small minutes.

Then he would be dead.

Chris’ plans are interrupted when Sarah walks into the train station, two hours before her train is scheduled to arrive. Despite Chris’ every attempt to make her walk out of the station, and his life, Sarah’s instincts urge her to stay with him.

As I looked at him, I could see fear in his eyes and I wanted to know what he was frightened of. What I did know, though, was that if I left, something terrible would happen. It was the combination of him wanting desperately for me to leave him alone and the sound of the train coming.

Unable to kill himself in front of Sarah, Chris postpones for a later date. However, Sarah’s interference causes a ripple effect that unravels everything he has worked so hard to hold together for his grand finale.

The only power Chris had was in taking his own life and even with that he had failed. As the clock continued to tick away, Chris took strength from his commitment to his wife, to be by her side on a date that mattered to them. And once all of the secrets were out, how fitting that they would have the same date on their tombstones, as it should have been.

On the other hand, Sarah is unable to move forward from her encounter with Chris. She becomes consumed by this mysterious man, one that in her mind she has saved. Her resolve to get closer to Chris only strengthens his resolve to keep her away. As she weaves her way into his life, she begins to dissect what she knows about this man: about the woman he loves and the events that drove him to stand on the train platform that night.

The closer Sarah approaches to the truth, the more unstable Chris becomes. He acknowledges his own instability, how things are shifting within him and around him, altering all his carefully laid out plans.

Putting his phone down, he looked at the spider again. It seemed so patient and calm. Waiting for the moment when there was a vibration on its web before it pounced with a viciousness humans couldn’t compete with. It was perfect. In control. He knew he needed to become more like the spider.

It is during his breaks from stability that we see a different side to Chris, one that may not be a victim at all. While it is clear that his only objective is to hurt himself, it also becomes apparent that someone besides Chris might be harmed in this process. Taking calculated steps, both Chris and Sarah dance around the resounding question: Who killed Julia?

In Our Little Secret, Darren O’Sullivan answers this question and brings readers into a psychological whirlwind of mystery, romance, and murder.