Book Review: Oscar Wilde and the Return of Jack the Ripper by Gyles Brandreth 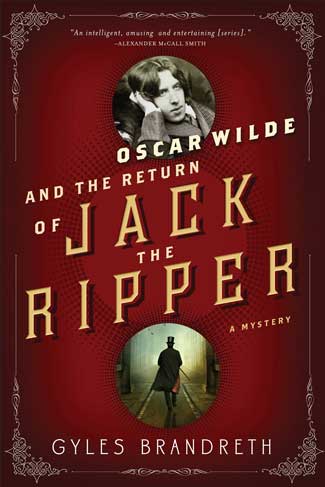 Oscar Wilde and the Return of Jack the Ripper

Oscar Wilde and Arthur Conan Doyle are recruited to track down Jack the Ripper in a novel that is at once a gripping Detective Story and a witty portrait of two of the most brilliant minds of Victorian London.

The recent craving for top-notch, historically infused thrillers probably began with the 1994 release of Caleb Carr’s novel, The Alienist. That novel masterfully mixed both fact and fiction and contained both real and imagined figures. Teddy Roosevelt, then NYC Police Chief, played a major role in that bestseller that was most recently turned into a successful TV miniseries.

One of my favorite—and in my opinion one of the best—recurring series in the historical thriller genre is the Oscar Wilde mysteries written by British author, broadcaster, and popular figure Gyles Brandreth. The appeal of this terrific series is both the inspiring wit and guile of Oscar Wilde and the plethora of real historical figures that are contained within each story. Most recognizable is Sir Arthur Conan Doyle, creator of Sherlock Holmes, who—much like Dr. Watson in those tales—acts as both friend and narrator for the Oscar Wilde mystery series.

Originally released in the U.K. as Jack the Ripper: Case Closed, this new novel may be the most infectious of Brandreth’s series and a book I literally could not put down. There has been a myriad of theories as to the actual identity of the infamous Whitechapel killer who allegedly referred to himself as Jack the Ripper. Most recently, author Patricia Cornwell wrote a nonfiction work revealing the true killer and supported that with a television special. Brandreth enters his own solution to this centuries-old mystery, and it makes for quite an entertaining read.

The novel is filled with real figures that include the known Ripper victims as well as the shortlist of final suspects as put together by Chief Constable of the Metropolitan Police Melville Macnaghten. It is he who commissions Oscar Wilde to look into the still open case and come up with his own summation, years after the last murder actually took place. Wilde, of course, brings along his pal Conan Doyle to assist him in what he promises will be a week of good fun.

Wilde and Doyle take Macnaghten’s list and run with it—of course, with the occasional excursion off the map that provides the pair with sustenance, entertainment, and even more necessary information for their mission. Wilde was brought in mainly to lend a poet’s eye that allows him to see the facts and then make a leap of the imagination beyond the reach of the average plodding policemen.

The Whitechapel murders tallied more than 300 potential suspects without a single arrest being made. This list was pared down to five for Wilde and Doyle. The suspect Macnaghten “liked” for the crimes was the deceased Montague John Druitt. However, Wilde and Doyle quickly eliminate him based on their findings and continue to focus on the remaining list of suspects.

There is a great scene in which Wilde and Doyle attend a séance. Ironically, narrator Doyle scoffs at the idea of a séance. He indicates that Irishman like Wilde went for things like that as they also believe in fairies, whereas Scotsmen like Doyle dealt in fact. The irony here is the famous actual hoax years later in which Doyle alleged to have proof of real fairies in his backyard!

What makes the rest of their investigation interesting is that they add a sixth victim to the Ripper list. They felt that a woman named Martha Tabram should be considered another Ripper victim. What supports their assertion is the fact that a new murdered woman is found bearing very similar evidence to the Tabram woman.

All of their meetings culminate in a final dinner party hosted by Wilde. It is no mere coincidence that, much like the Last Supper, 13 guests are around the table on this occasion. It is at the end of this evening that Wilde promised revelations which will name the identity of Jack the Ripper. At one point, Wilde’s brother Willie states, “… the most interesting books are the ones where the truth is told between the lines.” The same can be said for this ingenious novel by Gyles Brandreth. It’s not a matter of whether or not you accept the final revelation for the Ripper murders but that you had a lot of fun flipping the pages right through to the end of this terrific historical thriller.