March 7, 2022
One Night, New York by Lara Thompson is a Great Depression era thriller that follows Frances and Agnes and their plan for revenge in the course of a single evening. 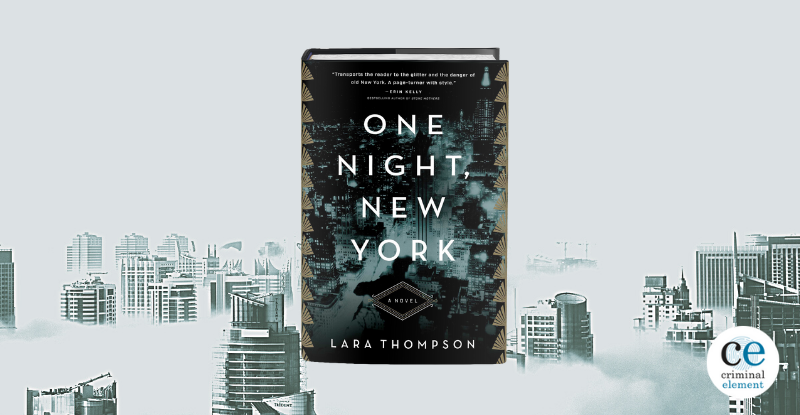 Frances and Agnes are atop the Empire State Building 21 December 1932. It’s the night of the winter solstice. They are on a mission, one they’re not sure they can execute. They plan to push a corrupt monster over the edge, a man who deserves killing because of what he has done to them. The events of One Night, New York take place over a twenty-four hour period, coupled with flashbacks. Debut novelist Lara Thompson paints word pictures with exquisite descriptions. Frances understands why so many people jump—the city seduces you from the sidewalks below up to the deck of the Empire State Building.

If this was the first and last time she was going to see her city from up here, if tonight was everything, then she must stain her mind with the sight of it. The dimming sky looked as though it had been stripped from the heavens and ironed flat: a thousand lit windows scattered like sequins on the dress of the night.

Few words pack more meaning than the Great Depression and the Empire State Building. The Great Depression was a painfully traumatic time in American history whereas the Empire State Building symbolized all that was progressive and exciting about New York City. On 12 September, Frances flees her family farm in Hays, Kansas to join her brother Stan in the Big Apple. She escapes from profound and soul-chilling poverty. Consider—she and her downtrodden mother shared a pair of Sunday go-to-church shoes for five years; it is implied that her father sexually abused her and Frances gave birth to a stillborn baby; the money Stan sent her so she could learn to read is stolen by her parents. Frances’s parting shot from her father is a farewell blast from his shotgun: she is petrified he will prevent her from boarding the train. Stan’s gift is a ticket to freedom.

Frances spends three days in the third class carriage. She cradles a newspaper underneath her head for a pillow. On the last day, two well-dressed characters come into her carriage, looking around as if they were at the zoo. They make Frances a little nervous and more than a little mad. Dicky is looking for new people to photograph, and for his companion Jacks to write about them so they can recapture earlier successes. They channel the famous Depression photographs of Dorothea Lange while they look for inspiration.

‘Inspired by the debris in this carriage? I don’t think so?’ The woman’s voice was getting louder. ‘We need to find some characters, Dicky, some real, no-holds-barred, stop-the-press characters. I haven’t been inspired since you found that woman standing in the middle of that sorry-looking-field with all those children. Now she was something to get worked up about.’

‘You can be beastly sometimes, Jacks, absolutely beastly. I know you don’t mean it, but there’s no need to be rude. Inspiration’s everywhere. You just have to be open enough to see it.’ The woman made a scoffing noise. ‘Look here,’ the man continued. ‘Like I said. Fine bone structure, good skin. Give her a wash and she might do.’

Frances doesn’t want to be treated like “some dumb Dora who’d never travelled anywhere before.” She overhears them preparing to take ‘a shot first.’ What? They want to shoot her? No, the man had “no gun in his hand, just a wooden box,” a camera. Still, how dare these strangers presume to take her picture without her permission?  Photographer Dicky and writer Jacks are simultaneously taken aback and enthralled with Frances’s spunk—although they still want to take her picture and she must not change a single, dirt-encrusted detail of her appearance. They give her a business card and invite her to visit them in old Greenwich Village once she gets her bearings.

When Frances arrives at Penn Station she doesn’t immediately spot Stan. The building is more beautiful than a church: “Golden light poured in through sky-high windows, shafting on to marble floor tiles in angular patterns.” Stan steers her through the turbulent streets of New York. Some foreshadowing: they stop and Stan tells Frances to look up at an amazingly tall skyscraper. ‘Empire State. A hundred storeys. Forty million bucks to build.’ They marvel at it.

Stan treats his sister to a meal at the Horn and Hardart automat. Out of nowhere a man starts beating on his companion and Stan just sits there. This is not the Stan Frances remembers. Worse, he knows the man and tells Frances to ignore what she sees. He brings her to a tenement apartment where the walls are paper thin. The streets of New York may be paved with gold but Stan has a brutish ignoble job—he’s a thug for a gangster.

Frances gets a job doing piecework embroidery. It is so hard on her fingers and arms that she needs to ice them. All she thinks about is visiting Jacks and Dicky. Stan forbids her to further her acquaintance but Frances didn’t escape one prison to willingly submit to strictures in her new life. Their apartment in the Village is bohemian, bold and marvelous—she’s not in Kansas anymore. Frances and Agnes, Dicky’s talented assistant photographer, form a deep romantic connection.

One Night, New York is flush with authentic New Yorkers—soldiers down on their luck, seedy gangsters in glamorous nightclubs, and bohemian artists and hangers-on. Agnes and Frances’s lives intersect with the dangerous criminals who have Stan in their clutches and tragedy ensues. No spoilers but readers will race through the chapters to discover the fate of their target at the top of the Empire State Building.