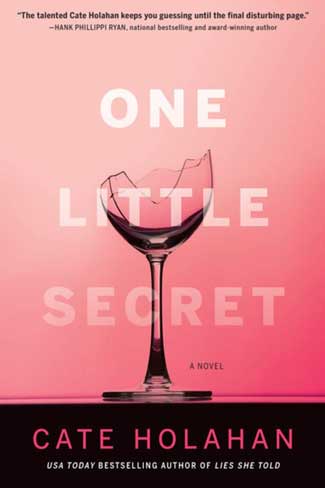 A taut, locked-room mystery with an unforgettable cast of characters, One Little Secret by Cate Holahan promises to keep readers’ eyes glued to the pages and debating the blinders that we all put on in the service of politeness.

Want a thrilling beach read that will make you feel a little (or perhaps a lot) better about your own summer vacation? Then read on…

Susan Ahmadi thought that suggesting a week-long sublet in the Hamptons to two neighboring couples in her new Westchester neighborhood would help her make friends and perhaps get her own workaholic husband, Nadal, to set aside his tech startup for a while and focus on their relationship for a change. With each couples’ kids off to summer camp, it seems like the perfect opportunity to enjoy some adult company on a gorgeous Amagansett beach.

Rachel Klein and Ben Hansen are one of these couples. Rachel is a high-powered personal injury attorney, her petite blonde frame belying her professional savagery. Ben is her handsome author/stay-at-home husband who used to play professionally for the NFL. Their two kids are best friends with the other couples’ children, making them the social lynchpin of the party.

The final pair is Jill and Louis Murray. Louis is a prominent ER surgeon, while glamorous Jill switched from orthopedics to sports commentary, earning her a following befitting her minor celebrity status. Each couple seems to be the picture of East Coast perfection, but it won’t be long before liquor consumption and enforced togetherness start uncovering the cracks in their facades and the hidden connections between them all, culminating in the brutal murder of one of the women.

In One Little Secret, Cate Holahan has written a remarkable thriller with a believably diverse cast of characters that explores the sacrifices of marriage and the secrets we keep from the people we’re closest to. The novel also examines the transformative powers of marriage—for good or ill—and how society assumes a person’s value or accomplishments lie primarily in their current occupation, usually to the detriment of those who stay home as primary caregivers to their children. Nowhere is this more clear than when Police Detective Gabby Watkins severely underestimates the background of one of our vacationers:

Gabby gawked at the former emotional wreck before her. She’d made a grave mistake, she realized. When Detective DeMarco had asked Susan’s profession, she’d said only that she homeschooled her autistic son. Gabby hadn’t given much thought to what the woman had done for a living prior to becoming a stay-at-home mom. If anything, she’d assumed she’d probably been a teacher or a child psychologist. She certainly hadn’t thought lawyer.

Susan, despite her insecurities, is a force to be reckoned with, but then, so is Gabby herself. Having requested the transfer to this Long Island branch, she hardly expects to be investigating a murder, a crime that rarely happens in their tony stretch of the Hamptons. But she gets called in for the case, partly because it’s all hands on deck and partly because of her standing with her mostly male colleagues.

Handling “females in a state” was Gabby’s unofficial job description. Since making detective, she’d been assigned nearly all the sex crimes and “weeping women” on the assumption that such assaults were more suited to her gender—and the realization from her peers that many of the cases devolved into a mess of allegations and recriminations that prosecutors wouldn’t touch. The work was draining and the rewards often never materialized. But somebody had to try. And, as the only female detective, she was that somebody.

The twists and turns made for a thoroughly satisfying thriller, even if I thought that the defense could have done a better job at the end for the accused. Plus, I thought Ally, the Murrays’ daughter, was even brattier than most girls her age, but that only added to the realism of the story. Most affecting was Jenny’s plea to Gabby that women needed to stick up for each other; certainly, if the women of this book had done a better job of looking out for one another, a lot of the tragedy—murder or otherwise—could have been avoided (and perhaps Ally wouldn’t have turned out to be so awful either).

This is definitely the kind of novel that will make you reevaluate your relationship with your neighbors and, perhaps, reach out with kindness the next time you have a chance. At the very least, it will entertain while making you appreciate your own summer vacation that little bit more.