March 5, 2020
It started with one little lie. But Interim Sheriff Jane Hardy will do everything in her power to uncover the truth in the first novel in the Pelican Harbor series. 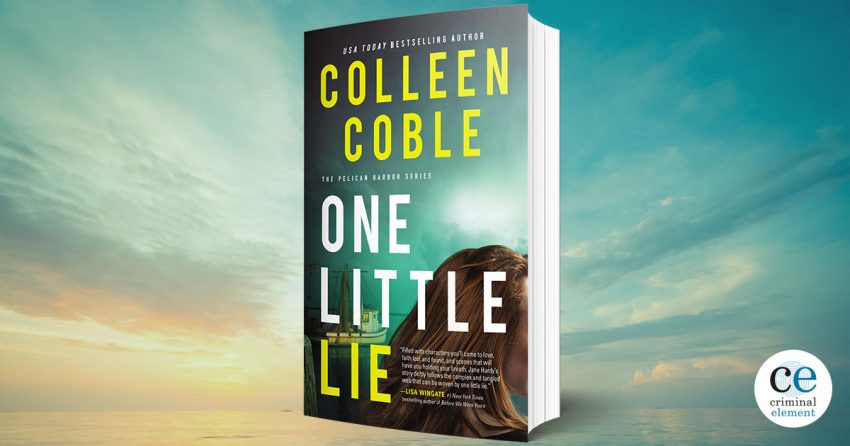 Welcome to the Pelican Harbor series, set in Alabama’s Pelican Bay area. Colleen Coble introduces Officer Jane Hardy as she is named interim sheriff after the longtime sheriff (her father) retires. Their relationship is strained and tense. Fifteen years earlier, father and daughter escaped from a cult, tragically, without Jane’s newborn baby. Jane, known as ‘Button’ because of her small stature, was only fifteen when she gave birth.

“It’s a boy!” Her mother plopped the baby on Button’s breast. “He’s good sized too. And listen to those lungs. He needs to nurse.”

Tired after giving birth, Jane falls asleep. She wakes to the smell of smoke and the sound of screams. She searches frantically for her baby, but her father grabs her and hauls her to his Jeep. Where’s her mother? She wants to stay with the cult leader. Button is hysterical: “She took my baby? She can’t keep him here. He’s mine!” but her father gently tells her that her baby is dead.

Her dad held her gaze. “I saw him, honey. He was blue and cold. Your mom gave me this photo for you to keep to remember him by.” He thrust a Polaroid picture into her hand.

Fifteen years later, the faded Polaroid is her most treasured possession.

Early one morning, when “sunrise pinked the clouds in the eastern sky and spread an iridescent shimmer over the waves,” a grizzled old shrimp fisherman and his young assistant make one last haul. They’ve snared an oversized cooler in their net. Inside the heavy container they find a decapitated corpse wearing a bloody wedding dress. The new chief of police will have to hit the ground running.

Soon after the discovery of the body in the cooler, Jane is called out at sunrise to investigate another corpse. Before going inside the house, she “caught the sight of something metallic.” Her dog Parker, a K-9 officer, goes after the person and pins him down.

She immediately recognized him as the man who invited her for coffee yesterday morning. Reid Dixon. She didn’t see a weapon on him, but a video camera was tangled in the brush.

Why is he at the scene?

“The mayor has given me permission to follow you around for the next few weeks, Chief. I’m doing a documentary on small-town police departments. You’re one of the few female police chiefs around, so I’ll be focusing the bulk of my video on you.”

Mayor Lisa Chapman confirms Reid’s statement. When she appointed Jane police chief, she took Reid up on his offer, telling Jane, “he called last week, and I knew he’d be even more interested in doing a documentary when he found out we had a female chief.”  There’s no way Lisa is going to pass up such “great exposure.” Jane doesn’t have a choice, but she still snaps at Reid to keep out of her way while he videos her. The crime scene is horrific.

A naked woman’s body sagged in rough stocks, and she was covered in feathers sticking to some kind of black substance. Tarred and feathered like some kind of medieval punishment. A crudely painted sign with the word Homewrecker was attached to the stocks with one rusty nail.

Is this murder connected to the woman found in the cooler? It seems like a vigilante with a moralistic axe to grind is behind the killings. Thankfully, Reid and his 15-year-old son Will, (Reid’s temporary cameraman) chronicle Jane’s activities in an unobtrusive and respectful way. She lets go of her resentment and even starts to bounce some of her theories off Reid. Conducting two homicide investigations is a baptism of fire for the new chief. It gets worse: Mayor Lisa asks Jane into her office and tells Reid and Will to stay outside. She tells Jane the FBI have arrested her father for swindling funds from the police department. Reid tells Jane to hang in there, insisting on taking her for emergency ice cream at nine in the morning. As a solitary sole, used to taking care of her own problems, this is a difficult proposition. Jane finds herself wondering: can she really depend on Reid?

But Reid has his own secrets from the past, and the gulf between them may be impossible to cross—especially once her father’s lie catches up with him.

What lies behind the title One Little Lie? Is unraveling the ironically labeled “little lie” key to understanding the trajectory of the overarching plot? Not every lie is revealed but readers won’t have to wait long for answers as Two Reasons to Run is coming in September 2020.

One Little Lie is shelved under the Christian romantic suspense label, defined as a clean read, one that is “heart-warming and heart-pounding,” and “enriched with faith and hope.” Jane Hardy’s excruciating personal story makes her suspicious of religion, organized or otherwise, but she is a work in progress.