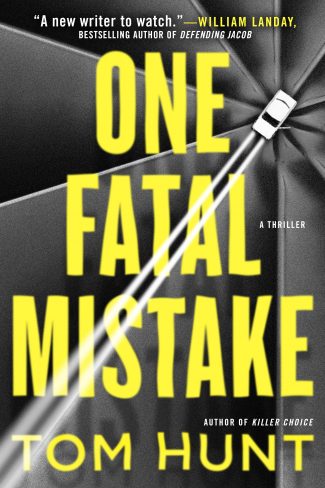 In Tom Hunt’s One Fatal Mistake, eighteen-year-old Joshua Mayo kills a man in a terrible accident, but the tragedy quickly becomes a hit-and-run. Not reporting the accident to the police, Josh confides only in his mother—and then everything goes wrong.

One Fatal Mistake is somewhat of a misnomer because it takes the reader deep inside the convergence of two fatal mistakes. Eighteen-year-old Joshua Mayo “takes a man’s life in a horrible accident” and “he leaves the scene without reporting the crime to the police.” Why would a teenager flee a hit-and-run accident, if it truly was an accident? The story opens chillingly: “The front door flew open and a shadowy figure covered in blood stormed into the house.” This is not good.  Joshua needs to get his act together before his mother Karen arrives home from her nursing job.

He stepped into the shower and turned on the water. It washed over him, rinsing the blood down the drain—bright red, then pink, then clear.

A diet of forensic crime shows has informed us that a trace of blood always remains, but humans instinctively try to wash away evidence, no matter the reality. Lady Macbeth sums it up: Out, damned spot! out, I say!” Eventually, Karen discovers what Josh did, through means a rueful parent of a teenager might recognize. She wakes up in the middle of the night, convinced something is wrong with her son. She discovers he isn’t in his bed and reaches for her phone tracker app.

The program opened. A map appeared onscreen. Right in the middle, there it was: a red dot.

The dot was about fifteen miles south of Cedar Rapids, down in the middle of Hawkeye Wildlife Management Area.

What was he doing all the way out there?

Here comes mom. Joshua shows her the dead body and starts to explain, when, to their horror, “about one hundred feet away was the beam of a flashlight, headed straight toward them.” Before Karen can decide what to do with the information that spills out from her distraught son, they literally crash into two fugitives on the run. Joshua and his mother are by no means hardened criminals, but the same can’t be said for the duo they encounter.

Meet the other fatal mistake: a decision to rob a bank.  The heist takes you back to “Point Break,” although rather than wear masks of former presidents, the trio hides behind Star Wars. Before storming a small-town bank in Hastings, Nebraska, Shane hands out “cheap plastic Halloween masks” to his accomplices, his brother Ross and Ross’s wife: “He handed Yoda to Amber. Chewbacca to Ross. Kept Darth Vader for himself.” But the force isn’t with Shane because after the robbery, Amber and Ross lock the doors of the getaway car and peel off. It seems “There’s no honor among thieves.” Proverbs 21: 10-11. Hours later they end up in the Hawkeye Wildlife Refuge near Cedar Rapids, Iowa. Their car has run out of gas and they’re at their wit’s end. When Ross sees two cars in the middle of the refuge, he says, “Might be our lucky day.”

The tenor of the book shifts dramatically. Amber and Ross take Karen and Joshua hostage, convinced the duo will provide a safe escape ramp for them to enjoy the fruits of their felonious labor. Things don’t go as planned. Like the Perils of Pauline, every chapter ends on a more nail-biting cliff-hanger than the one before. The strongest person in the book is the single mom. The weakest, Karen’s sad-sack ex, Teddy, more interested in being a friend to Joshua than a father. Karen blames Teddy’s machinations for the predicament she and Joshua find themselves in . . . but enough almost-spoilers. Plunge into One Fatal Mistake and meditate on the sliding spectrum of criminality. Eighteenth-century philosopher Edmund Burke said, “Crimes lead one into another; they who are capable of being forgers are capable of being incendiaries.” It’s fascinating to watch Karen confront what she can do—what’s she’s willing to do—to save her son.

For Karen and Josh, life will never return to normal. No more will Josh look “out from the deck at their small backyard, the tranquil farmland that stretched forever, the night sky above.” They have been stripped down to their essence but in the aftermath of horrific events, they are there for each other, each trying to rebuild and re-enter life. Paul Simon says it best, in a verse from “Mother and Child Reunion.”

No I would not give no false hope

On this strange and mournful day

But the mother and child reunion

Is only a motion away

The underlying message of One Fatal Mistake is that actions have consequences but the why and how of a mistaken decision forever colors the outcome.