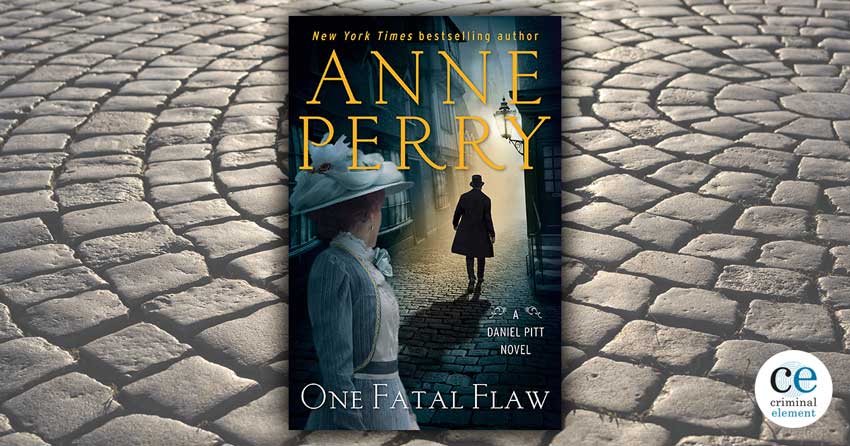 One Fatal Flaw by Anne Perry is the third book in the Daniel Pitt series, where two fiery deaths have young lawyer Daniel Pitt and his scientist friend Miriam fford Croft racing to solve a forensic crisis.

On the surface, One Fatal Flaw is a simple, albeit harrowing, story. A docker dies in a fiery inferno, but his companion, Rob Adwell, escapes with nary a singe. The police arrest Adwell for murder, and his persuasive girlfriend convinces Daniel Pitt to defend him. An esteemed scientist persuades the jury that he is innocent. A few weeks later, Adwell “is killed in the same fiery fashion.” That puts a different spin on the evidence, doesn’t it? Let’s recap:

When a desperate woman comes to Daniel Pitt seeking a lawyer for her boyfriend, Rob Adwell, Daniel is convinced of the young man’s innocence. Adwell has been accused of murder and of setting a fire to conceal the body, but Daniel is sure that science can absolve him—and Miriam fford Croft is the best scientist he knows. Miriam connects Daniel with her former teacher Sir Barnabas Saltram, an expert in arson, and together, they reveal Adwell’s innocence by proving that an accidental fire caused the victim’s death.

As stated previously, Adwell is killed shortly after his acquittal in the same way his erstwhile victim met his fate. Anne Perry poses that “if these deaths are, in fact, murders, what essential clue could Daniel and Miriam have missed?” Also noteworthy is Miriam’s troubled past relationship with Saltram. On a personal level, she doesn’t want to ask Saltram for help, but professionally, she must as their client’s life depends on it.

Apart from that, if they did not seek and find the truth, it would eat away at them, at their confidence in themselves, in all that they cared about and felt. Lying was like mold: it spread until the whole fabric was rotted with it.

In addition to Saltram, Daniel and Miriam pull out all the stops and consult with anyone and everyone that can help them find justice. Dr. Ottershaw, a forensic scientist readers met in the first Daniel Pitt story,  Twenty-One Days, tells them about a forensic expert who is blessed with “creative imagination,” Dr. Evelyn Hall.

“Is he available?” Daniel asked. “I’ve never heard of him.”

Ottershaw’s smile was completely unreadable. “Evelyn is both a man’s name and a woman’s, I would remind you, and in this case, she is a woman. Although that may not be instantly apparent. She is eccentric, to say the least.”

Miriam’s heart sank. “A woman has no chance against Saltram.”

Ottershaw looked at her, his face unusually stern. It was sufficient to silence her. He turned back to Daniel, ignoring the look of despair that was in his face, too. “She is fully qualified,” he asserted, “in Holland, where they have no such prejudices against women. On the contrary, in the unlikely event that they can reach the highest standards, and Dr. Hall does, they are welcomed. Indeed, she exceeds most of them.”

Miriam’s mind was racing. A woman as good as Saltram! It was possible! In fact, she already existed.

This is significant because Miriam’s “expert” witness, Sir Barnabas Saltram, is profoundly distrustful of women scientists. Who better, then, to cast doubt upon his testimony, to possibly put a dent in his immaculate, elegant, and arrogant attitude?

In Triple Jeopardy, Daniel comes to realize that his father, Sir Thomas Pitt, head of Special Branch, “the antiterrorism part of the Secret Service,” is an asset to his legal career.

Daniel recognizes that his father’s skills can’t be overlooked, ignored, or underplayed, and that using his father to save a man’s career is not wrong and doesn’t make him less of a competent adult.

Pitt père and Pitt fils collaborate in One Fatal Flaw on a visceral level. Perhaps every professional has that case that got away from them, a niggling toothache to memories of an otherwise successful career. Such is the case for Sir Thomas, but to say more would be to give away the plot.

What symbolizes the “new age” to Daniel? The readily available black taxis—for although there were still “horse-drawn vehicles” on London streets, “everything was changing.”

Most especially—and that is what interested him now—forensic medicine, ways of detecting crime and then proving it in court. Guns had been around for centuries, and knives for even longer. Fire was older than mankind! But the detailed scientific knowledge of them was new. The understanding of why people do things, and how you can work backward from an act to whatever generated it in someone’s mind, that was new, and promised all sorts of possibilities unimagined even a decade ago.

Daniel Pitt’s confidence in the burgeoning field of forensic medicine is the crux of the story. Pitt discovers that believable proof such that can sway a jury is in the hands of the expert witness. What if the scientist cooks the books, skillfully shading the facts to lead the jury in a direction that is not consistent with the truth? When they suspect this, Daniel and Miriam steel themselves with an internal integrity that informs all their actions.

If they did not seek and find the truth, it would eat away at them, at their confidence in themselves, in all that they cared about and felt.

One Fatal Flaw is like a set of Russian dolls. Daniel Pitt is on a journey to uncover secrets that have lain dormant for many years. Anne Perry is a masterful writer and this series just gets better and better.