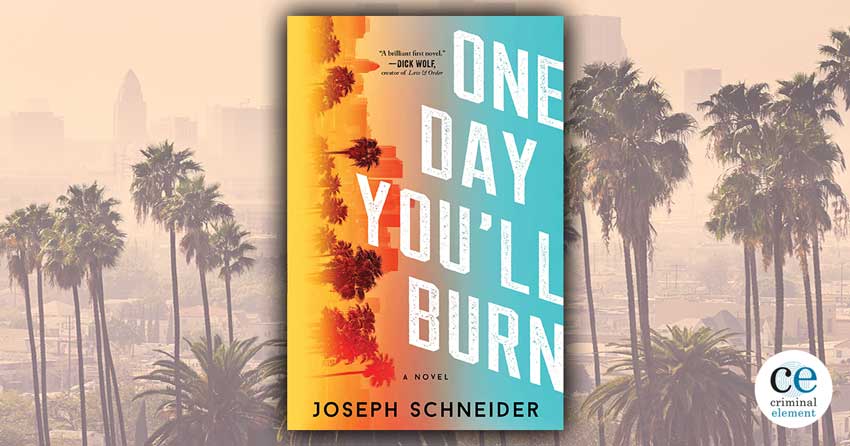 Tully Jarsdel is an unusual sort of police detective. Nearing 30 and on track to become a professor of history—following in the footsteps of his proud Dad and Baba—he abruptly decides to ditch academia and his fiancée in order to apply to the police academy. His fathers, having endured more than their fair share of police brutality as gay men at the turn of the 21st century, are horrified. But Jarsdel is determined to live a life of active purpose by solving crimes and bringing evildoers to justice, not out of some black-and-white morality but due to a conviction that the path of human evolution tends away from violence and that he is uniquely positioned to help shepherd that along.

Of course, this philosophy makes him the butt of jokes from his brethren in the LAPD. It doesn’t help that his rapid promotion from uniformed officer to homicide detective came as the result of the top brass experimenting with a new Hollywood Homicide squad to replace the one that had been scattered after the Los Angeles crime rate dropped dramatically in the first decade of the 2000s. Paired with 15-year veteran homicide detective Oscar Morales, Jarsdel is looking to finally make a good impression with his academic brain in their unusual latest case.

A badly burned body was dumped in Thai Town, arranged in a manner Jarsdel is convinced is ritualistic. But progress on solving the murder is slow-going, and investigations into their other active case—the serial poisoning of dogs throughout the city on their owners’ wedding days—have gone on for years with no result. Jarsdel begins to doubt himself and the vow he made to the deity near whose altar the burned body was left.

Jarsdel reflected upon these and other cases he’d worked. Very quickly, his promise to Brahma—to “make it right”—seemed not merely naive but arrogant. What had he meant by “it”? The grand human condition? Did he really believe he could improve its overall character by locking up a handful of the lost and desperate? That by some mysterious mechanism, fewer of the lost and desperate would therefore be produced? Baba had referred to his zeal as a kind of idiocy. It appeared the man, right as always, was right yet again.

The tension between Jarsdel and his fathers makes for a compelling backstory as our hero attempts to mesh his background with his chosen line of work. His parents fear for his integrity and for his safety, unwilling to acknowledge their only child’s agency in this, to them, unthinkable pursuit. I honestly can’t recall the last time I read a police procedural whose hero, a nerd from a family of nerds, faced such familial hostility to his calling.

Adding even more flavor to the proceedings is Los Angeles itself, a city whose siren song can be heard around the world but whose reality can be as cruel and merciless as those sirens of myth. One auteur Jarsdel encounters sums it up thusly:

“New York kills you fast. Out here, it’s slow. We eat people’s dreams for breakfast. You work retail, do some cattle calls, get a half-assed degree in filmmaking or whatever, and before you know it, ten years have gone by, and you’re out of options. Futureless. Every actor who couldn’t get a break—and this isn’t some small subset of the population. We’re talking about hundreds of thousands of people, and then every PA who gets shit on every day by the line producer and every writer’s assistant who just can’t get that pitch meeting. And they go a little crazy. Because it makes you crazy to be that close to something and not have it happen. Whether you’re in the biz or not, it touches you. It’s this fury, this storm, always raging just below the surface, but every now and then, it breaks out, you know? That’s Hollywood, man.”

As Jarsdel and Morales investigate, they find themselves peeling back the layers of hope and desire that draw most people to the city in order to expose the one person who will kill to protect the fragility of a dream. And not just kill in any old sort of way, but kill with a madness and purpose that will shock even the most jaded members of the LAPD.

There’s a lot of good detective work and excellent characterization in this debut procedural that features one of the most original heroes to come out of the genre in a long while. It is at once a love letter to and a scathing critique of the city of Los Angeles that never, however, loses its belief in the power of hope and in the ability of even one person to change things for the better.