Book Review: Once A Liar by A.F. Brady 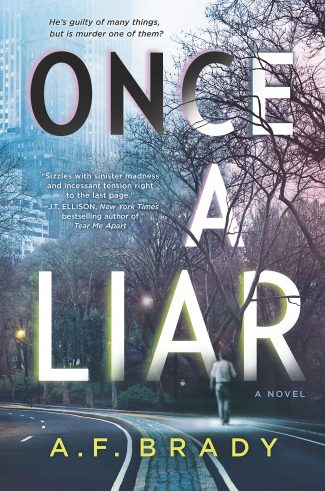 Once A Liar is A.F. Brady’s thriller about a high-powered sociopath who meets his reckoning when he’s accused of the brutal murder of his mistress.

High-powered Manhattan Defense Attorney Peter Caine is as unlikable as he is compelling. I wasn’t sure I’d like the author’s choice for the main character until I realized that she’d surrounded him with characters possessing even less humanity and compassion. Plus, it’s always interesting when a narrative is told from the first-person perspective of an anti-hero. I found myself noting how Caine was more victim of his own desire to overcome his roots. Perhaps his greatest flaw, other than his increasing inability to compartmentalize his day job as a lawyer and his role as a decent human being and father, is his Doctoral Degree in Lying.

Once A Liar by A.F. Brady begins with the funeral of Caine’s first wife, Juliette, and the daughter of his law partner and one-time idol. We find out right away what kind of man Caine is as the author flairs the end of the chapter with this line—I would like to listen and attend my family, but I just can’t bring myself to care.

As he begins a practice with his partner, he’s initially able to compartmentalize, keeping the cutthroat life of a defense attorney separate from his role of a loving husband.

Caine built his life from the fog of fiction, heaping upon it a childhood he never had with parents he never knew. His life is so fictitious, it’s only when he marries his first wife that he’s able to come clean and tell her a new version, one closer to the truth than he cares to share. But only she knows. To the rest of the world, his façade is reality. As he begins a practice with his partner, he’s initially able to compartmentalize, keeping the cutthroat life of a defense attorney separate from his role of a loving husband. But the more successful he becomes as a lawyer, the more difficult it becomes to maintain that crucial separation, until the narrative of Once A Liar unravels like a sociopath’s first-person shooter.

After his first wife’s death, his son moves in—a son he hardly knows and cares little about. But Caine is coerced into playing the role of a father by his longtime girlfriend, Claire. As ineffectual as he feels he’s being, it’s all he can muster because the idea of being a father (much less having a father) is as alien to him as feeling empathy for anyone outside his inner circle.

Caine’s nemesis is District Attorney Harrison Doyle. When Doyle’s daughter, Charley, former consort to Caine, turns up dead, all eyes turn to Caine. Did he kill her for revenge? Was it a murder driven by anger? Did Caine kill Charley on a whim? Weaving together past and present, the author details through Caine’s point of view how he came to be, how he is, and how he must try and save his own life from what he knows has to be a set-up to frame him.

Did Caine really kill Charley? If not him, then who? As more and more evidence mounts against Caine and his reputation as a liar remains in the forefront of everyone’s minds, it’s difficult for anyone to believe anything he says. In the end, Caine’s actions force a final confrontation that deliver an explosive conclusion.

It takes a talent like Brady to make the parallel past and present story arcs work. Fans of American Psycho and legal thrillers will dig this fall from up on high from the eyes of a sociopath.