Book Review: Of Blood and Bone by Nora Roberts 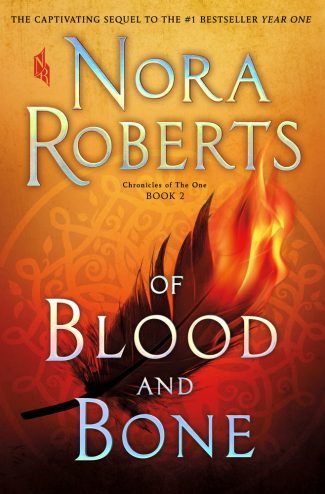 Of Blood and Bone

Chronicles of the One #2

Of Blood and Bone by Nora Roberts is the 2nd book in the Chronicles of the One series set in a post-apocalyptic world and the one person who might be able to save everyone.

While the first book of Nora Roberts’ Chronicles of the One series, Year One, dealt with the apocalypse caused by the Doom, a magical plague that wiped out a massive swath of humanity, the second in the series, Of Blood and Bone, focuses on the rise of the next generation.

Middles are tough. Coming of age stories of destined youths, like the main character of Of Blood and Bone, can also be difficult to write. But the book provides unexpected (and sometimes delightful) twists that I won’t spoil but they certainly fit with the familial theme that is present throughout. Those family bonds are what give the story resonance.

As the blurb reveals, the book focuses on Fallon Swift, the baby born at the end of Year One who’s destined to be The One, the magical leader who will bring order to the chaos caused by the Doom. And with enemies on all sides, that’s not going to be an easy undertaking. As seen in the first book, some people were transformed by the Doom into nightmares come to life and became corrupted by their new powers. One of those who let power corrupt, Fallon’s uncle, killed her father at the end of Year One.

There are also the humans who, on (a usually religious) principal, hate anyone with magical capabilities and seek to wipe them out, no matter what it takes. And last, there’s a third faction, a government of sorts, that has control of what remains of the American military force. This government views anyone with magic as someone to be controlled, experimented on, and perhaps used as a weapon.

Saving the world won’t be easy for Fallon. As the prologue notes, some people are going to be bad, no matter what.

But months became years, and the world remained broken. Hunts and raids and sweeps continued.

Some hid, skittering out at night to scavenge or steal enough to survive another day. Some choose to take to the roads in an endless migration to nowhere. Others took to the woods to hunt, to the fields to plant. Some formed communities that ebbed and flowed as they struggled to live in a world where a handful of salt was more precious than gold.

And some, like those who founded and formed New Hope, rebuilt.

That’s a heavy burden for anyone to handle, let alone at 13-year-old destined to be The One. To succeed, Fallon needs help and training, and it’s that need that leads her to a two-year internship away from the family farm—the only place she’s ever known. Much of the story in Of Blood and Bone focuses on Fallon and her two-year magical internship with the Welsh wizard Mallick. If you’re sensing a Merlin/Arthur-style relationship, you would be correct, though this one gender swaps Arthur. But Mallick isn’t simply a wizard-archetype. Instead, he comes to life as a gruff, intense, and eventually mortal man who bears the burden of ensuring The One is ready. Or, perhaps, ensuring that Fallon knows she has a choice and can turn away from the burden.

Many stories of pre-destined people often give the chosen one little choice in the matter, but Fallon does have to choose. She doubts herself, and she worries whether she can ever learn enough to be The One. But she also knows that if she turns away, then the tragedies caused by the Doom will continue, even at her idyllic family farm that has so far escaped notice by the various groups seeking power.

I don’t know enough. It’s why I have to go. I have to learn more. I have to, and I’m afraid. I’m so scared. They want to kill me and Mom. They killed my birth father. They’ll find me sooner or later. They could come here and find me. If anything happened to Mom and Dad, to you and Travis and Ethan…

Fallon’s story is juxtaposed with the tale of New Hope, where the survivors of the first book live and are still doing what they can to help others who want to knit the world—or their slice of it—back together. For readers of Year One, these segments are a chance to catch up with familiar characters and see what they’ve accomplished in fifteen years at New Hope, including seeing how the babies who were rescued in the original story have grown up.

She’d wondered why her precious twins held magicks when she didn’t, their father hadn’t. But over time, she’d seen children with no magickal parent bloom in gifts, and others born of magicks show no abilities.

It came through the blood and the bone, of that she was certain, but not always from the parent. She believed Duncan’s and Antonia’s great gifts came, like Tonia’s eyes, from her father, their grandfather. A good man who hadn’t known what ran in his blood or that the dark across the line would somehow use him to destroy.

Teenage Duncan is connected to Fallon by the visions they share and, probably, by past lives together. But their romantic connection in this book is slight, especially since the dangerous world barges into New Hope again at the end, causing more tragedy, and showing just how enormous the task ahead will be.

It may sound odd to call a book about a dystopian magical future hopeful, but Of Blood and Bone manages to do just that.  Fallon’s family and the tight-knit community of New Hope are the literal hope of the future.

While Of Blood and Bone is clearly the middle chapter, it’s one that never struggles keeps the reader’s attention, thanks largely in part to one of Nora Roberts’ greatest strengths: characterization. There is one segment where Fallon’s mother is talking about the two men she loved that definitely caused me to tear up a bit.  And the story also allows the older characters to shine, rather than giving way completely to youth which I, as an older reader, appreciated.

There are a few segments where Roberts switches point of view so quickly that I lost the thread of the narrative but that’s a small flaw in an otherwise excellent story.

You could potentially read this as a stand-alone but it would definitely be better to start with Year One instead. I’m hopeful the final volume of the trilogy will live up to the promise of the first two books. With Nora Roberts writing it, that seems like a safe bet.

Comment below for a chance to win a copy of Of Blood and Bone by Nora Roberts!

Of Blood and Bone Comment Sweepstakes: NO PURCHASE NECESSARY TO ENTER OR WIN.  A purchase does not improve your chances of winning.  Sweepstakes open to legal residents of 50 United States, D.C., and Canada (excluding Quebec), who are 18 years or older as of the date of entry.  To enter, complete the “Post a Comment” entry at http://www.criminalelement.com/book-review-of-blood-and-bone-by-nora-roberts beginning at 2:00 p.m. Eastern Time (ET) December 10, 2018. Sweepstakes ends at 1:59 p.m. ET December 24, 2018. Void outside the United States and Canada and where prohibited by law. Please see full details and official rules here. Sponsor: Macmillan, 175 Fifth Ave., New York, NY 10010.