November 22, 2019
In Nothing More Dangerous by Allen Eskens the disappearance of an African-American woman shakes a small Southern town in Missouri. Following the perspective of Boady Sanden—a high school freshman—the mystery begins to unfold, revealing the stark lines of race and class that both bind and divide the small town. 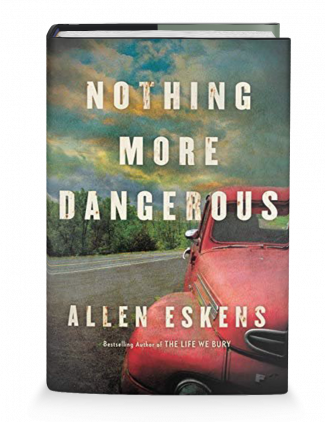 If Harper Lee’s iconic novel, To Kill a Mockingbird, had been set in the mid-west instead of the south, it might resemble the latest novel from Allen Eskens entitled Nothing More Dangerous. Even though this is Eskens’ sixth novel, it is the first he ever wrote. Having begun Nothing More Dangerous decades ago, it became such an important work to the author that it took him that long to eventually fine-tune it to the point where it was available for mass consumption. The end result is a touching and important novel that is labeled as a Mystery but clearly toes the line of Literary Fiction with its’ themes of racial equity and prejudice in 1976 Missouri set amidst the Ozark Mountains.

Author Allen Eskens is a practicing criminal defense attorney who has seen five previous novels both win and be nominated for some of the most prestigious literary awards in the country. However, Nothing More Dangerous is a special work for him. Having originally begun writing it in 1991, Eskens hoped the experience would be cathartic and help him work out feelings surrounding subjects such as prejudice and racism. Fortunately for us, he was finally able to complete this work, and it may be his finest novel yet.

The protagonist and literary instrument Eskens uses to face the heavy issues that were afore-mentioned is a High School Freshman named Boady Sanden. An only child who lives with his mother—his father passed away when he was a toddler—Boady dreams of leaving small-town Missouri and making it on his own in some big city. Pretty much, Boady will be happy anywhere that is not Jessup, Missouri. It was on the day of his fifteenth birthday that Boady learns Ms. Lida Poe went missing. In a town as small as Jessup, it’s quite easy to notice when someone disappears. It’s even easier when that person is a young, professional black woman who may or may not have been an affair with a white man in town. She also may or may not have disappeared with a lot of money. Boady spends a lot of time with an elderly neighbor named Hoke Gardner. Hoke is so fond of Boady that he actually gave him his dog. He also lets Boady read any of the books he has kept. One that Boady really took to was The Hound of the Baskervilles by Sir Arthur Conan  Doyle. He was so taken with Sherlock Holmes that he reads the entire collection of stories about him. Boady fancies himself a sort of detective as he takes it upon himself to dig into the Lida Poe mystery.

Boady also starts asking questions to his mother about Hoke—why he has a crippled arm and was it true he once had a family and lost them tragically? His mother will not answer as some things do not need to be looked into. Boady does not consider himself a racist, yet Hoke gets a kick out of how he gives back-handed racist comments—like Bob Gibson is a great pitcher even though he’s black—and Hoke enjoys informing Boady that they are about to get new neighbors. The Elgin family is about to move in across from Boady. The father, Charles, will be a new manager at the local factory. There is also a boy, Boady’s age, named Thomas who will be joining him in high school shortly.

This all happens at a difficult moment for Boady involving a current trio of bullies who are bothering him at school. Jarvis, a popular high-school athlete, and his two goon cohorts, Bob and Beef, are the ones Boady gets on the wrong side of. However, Jarvis offers Boady a chance to escape a beating and do them a big favor. It turns out it was Jarvis’s father who was replaced at the local factory by the incoming Charles Elgin. Jarvis would like Boady to keep his eyes and ears open and inform on the Elgin family from time to time. Also, there may be some requests to take part in more serious escapades like spray-painting racist epitaphs on their home. Boady is not comfortable with this and realizes that Jarvis and his extended family are all part of a group similar to the KKK called the CORPS, something Boady does not believe in or want any part of.

Meanwhile, Boady has befriended his new neighbor Thomas Elgin. He even gets Thomas a job with him doing sheet-rock work at the construction company both Boady and his mother work for. Once school lets out, Boady welcomes the summer and looks back at it as giving him some of the best memories of his life. Not all of these memories will be positive. You need not be the most astute reader to recognize that all I have mentioned up to this point is destined to converge in a fiery climax. Eskens is such a great writer that he handles all of this effortlessly and raises what is listed as a mere ‘mystery’ to the class of literary fiction. For me, that makes Nothing More Dangerous required reading and something that should be taught at high-school level the same as Harper Lee’s To Kill a Mockingbird.