Book Review: The Nothing Man by Catherine Ryan Howard 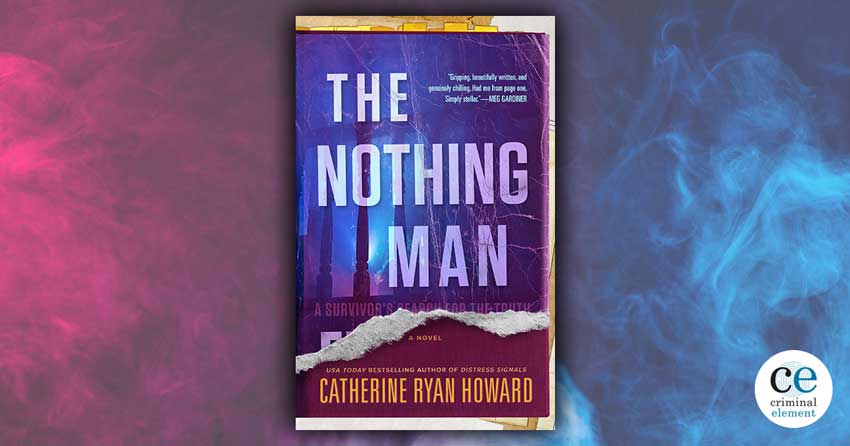 The Nothing Man by Catherine Ryan Howard is a unique thriller where the only survivor of a serial killer’s murder spree writes a book about her experience, piquing the interest of the still-at-large killer and setting up a wild final confrontation.

When I began reading The Nothing Man, I was relatively unfamiliar with Catherine Ryan Howard—a mistake I’m sure to remedy soon. Sure, I was aware that Howard, a fellow Irish person like myself, had been nominated for the 2019 Edgar Award for her novel, The Liar’s Girl, but I had not read that novel or her other two works. After reading The Nothing Man, I cannot see anything beating it for this year’s Edgar—or any other award for that matter.

After a lifetime of reading mystery novels and psychological thrillers, the stories begin to blend into each other if there isn’t something that makes it particularly memorable. But Catherine Ryan Howard has done something unique with The Nothing Man to not only make it stand it out but—like how Gillian Flynn’s Gone Girl brought about slews of multiple-narrator thrillers—also likely find it imitated often in the years to come.

The Nothing Man is set up like a novel within a novel but unlike I’ve ever seen before. The story is reminiscent of other “final girl” stories, as the 12-year-old survivor of the crime and murder spree at the hands of the Nothing Man is now a 30-year-old woman. The Nothing Man is named as such because the police and all investigators literally have nothing on him. He didn’t leave a single trace of himself at any of the crime scenes, and then he faded away into the sunset.

Eve Black was the only survivor of the murderous evening that found her mother, father, and 7-year-old sister, Anna, slain by the Nothing Man. Eve hid the entire time in a bathroom that the Nothing Man never went into following his killing spree. Eve grew up as forever being “the girl who was” and the Nothing Man was never heard from again.

Rather than a simple linear narrative to tell this tale, Catherine Ryan Howard has split this book into two. Things open with a normal title page depicting The Nothing Man by Catherine Ryan Howard. The first chapter shows us a department store security guard named Jim Doyle becoming thrown for a loop when he finds a new novel being displayed in the store titled The Nothing Man. We immediately learn that Jim was the Nothing Man and is shocked that a book was released 18 years after his last attacks. He is that much more surprised when he learns that the author is Eve Black, the only survivor of his last attack.

What Howard does next is just stunning. She restarts the novel with a brand new title page—but this time the author’s name is Eve Black. We also see a new dedication page, this one made out as:

For Anna and all the victims whose names we tend to forget, or never learn.

She then lists on the next page all of the victims of the Nothing Man, with dates, ages, and crimes fully spelled out. During these parts of the novel, even the headers on each page switch to “Eve Black.” Between portions of Eve’s “book,” we see chapters showing Jim Doyle and how he is responding to these new events that have rocked his world. During these parts of the story, the page headers switch back to Catherine Ryan Howard. Absolutely brilliant!

Jim Doyle gets himself a copy of The Nothing Man and begins to read it. He gets more and more fired up at not only parts he sees as discrepancies but also when he reads that Eve Black and Ed Healy, the lead investigator during the Nothing Man crime spree, will not stop until they both catch him. Now, the gauntlet has been tossed, and we get to see both the killer and the victim that got away make their moves right up to their inevitable next meeting—a book signing with Eve Black that Jim’s wife and daughter want to attend. Things get even more surreal when Jim is recognized by Ed Healy, who is attending, as Jim worked phones at the Garda back in those days. When Ed brings Jim directly up to Eve, she even claims to remember him. What really blows Jim’s mind is when Eve thanks him and indicates she mentions his name in her book! Wow!!

The remainder of the novel runs its suspense as taut as piano wire, and readers will literally be glued to their seats waiting to see whether “The Final Girl” or “The Nothing Man” will come out on top in this nerve-wracking thriller. Catherine Ryan Howard has created something that is utterly groundbreaking and sure to be one of the most memorable reads of this year and many years to follow.