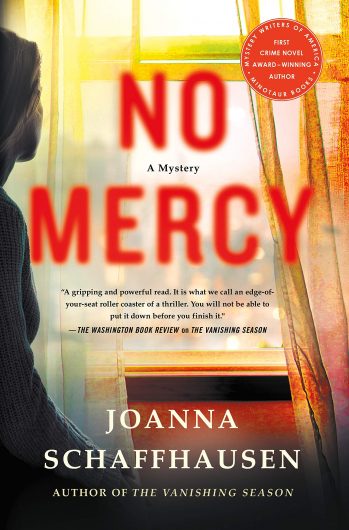 In No Mercy by Joanna Schaffhausen, Police Officer Ellery Hathaway has been suspended from the force for killing a man in cold blood.

Take down the monster when you have a clean shot because you might not get a second one. This philosophy had landed her in hot water now, but she felt confident it would blow over eventually. Her crimes were small compared to those of the man she’d killed.

To recover her badge, she has to attend a support group for survivors of violent trauma. Ellery doesn’t see the point.

“It can be helpful to talk to other people who are walking your same path,” Dr. Sunny had countered but Ellery knew all crimes were not created equal. There was getting mugged on the street, and then there was surviving an abduction by one of the world’s most infamous serial killers.

Given no choice, she attends and meets several other survivors. Two especially capture her interest. One woman was badly burned in an arson fire in which her two -year old son perished. Ellery suspects the wrong man, who is now up for parole, was convicted. The other is a survivor of a brutal rape. The desperate Wendy pleads with Ellery to help her identify the man.

Ellery turns to Reed Markham, the FBI profiler who had rescued her from the closet when she was originally abducted herself all those years ago, for help. Although his boss has asked Reed to avoid Ellery, he is drawn to her. But Ellery holds him at arm’s length.

She hadn’t been kidding with Reed when she’d told him she’d never been on a date. She hadn’t missed it either, but now here he was insisting she give it a try. The dress had long sleeves and a high enough neckline that it did not show much of her scars. . . . . Ellery hesitated as she looked in the mirror – she never spent this much time looking at herself – and tentatively assessed her handiwork. She looked . . . normal? Like a woman who could be going out on a date, if she had been born into a different lifetime. A ghost of a person she would never be.

The search for the real arsonist and for Wendy’s rapist takes Ellery into several life-threatening situations but, with Reed’s help, they uncover the truth. The results are not what Ellery expects and the consequences are wrenching. Dr. Sunny forces her to see how often she puts her life in danger and why. And what she is doing to herself by her actions.

The dangerous question made Ellery’s heart pick up speed, and a sweat broke out across the back of her neck. But this time, she didn’t deflect or deny. She thought of everything she’d already lost and would never have again.

The mysteries are captivating, but Ellery is the heart of the book. She is a damaged woman, yes, but always sympathetic and believable. No Mercy is a winner.