March 18, 2022
From Peter Swanson comes Nine Lives, the story of nine strangers who receive a cryptic list with their names on it—and then begin to die under highly unusual circumstances. 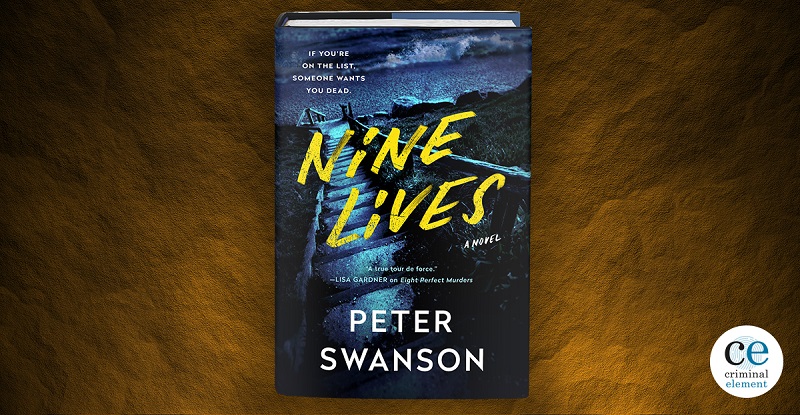 Peter Swanson is the Boston-based author of eight novels of suspense. His name has appeared on both the Sunday Times and New York Times bestsellers lists and his books have been honored with awards and recognitions including the New England Society Book Award (The Kind Worth Killing), an NPR Book of the Year (Her Every Fear), and a Kirkus Reviews Book of the Year (Eight Perfect Murders). His newest standalone, Nine Lives, is out now.

The book opens with a list of—you guessed it—nine names, each accompanied by a short character description. Then, we meet Alison Horne, the young mistress of Jonathan Grant, who has a standing Wednesday rendezvous with her paramour; she inhabits Grant’s one-bedroom apartment in Gramercy Park. It’s here that Alison receives a non-descript envelope, sans return address, that contains a single sheet of paper with the aforementioned names printed on it. Despite the seeming innocuousness of it all, she senses an implied threat. Eight others will receive similar notes and feel varying degrees of apprehension.

Things quickly escalate as bodies start turning up, the only apparent commonality between them being their inclusion on the list of names. Jessica Winslow, an FBI agent in Albany’s field office, is determined to put a stop to it before she meets a similar fate—though her involvement is complicated by the fact that she is among the targeted and therefore cannot work the case officially. Meanwhile, Detective Sam Hamilton—who grew up on a steady diet of Agatha Christie novels (which he rereads as inspiration for crime-solving)—is working a related death outside a resort in Kennewick, Maine. He’s convinced the pieces will fall into place…eventually. But will there be anybody left standing when they do?

Swanson alternates points of view with alacrity, unleashing a varied and vibrant ensemble—from the respectable to the reprehensible and everything in between, ensuring that readers will find somebody to love…or loathe. This allows him to show the true range of (potential) victims, from age, gender, and sexual orientation to careers, interests, and locations. Indeed, it’s a cross-country caper in which authorities are not only in a race against time but distance—not to mention the wits and whims of a criminal mastermind. It’s heady stuff but grounded by the sobering notion that you can be going about your life when some transgression from the past—and not necessarily your past—resurfaces with a vengeance, threatening to destroy you.

Peter Swanson is the king of the high concept thriller, and Nine Lives marks yet another ambitious addition to his collected works. An ode to Agatha Christie’s classic And Then There Were None, it expands on her premise by moving the killing grounds from an insular island setting to America at large. Sure, there are some improbabilities, but this is fiction, after all—and it’s terrifying enough in premise that you may not want its execution too realistically done…