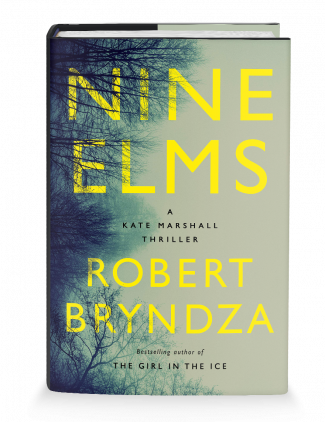 Nine Elms is the first novel in Robert Bryndza’s new Kate Marshall Mystery Series, in which former detective Kate Marshall must revisit her painful past to catch a serial killer.

British scribe Robert Bryndza burst onto the scene in 2016 with the #1 International Bestseller, The Girl in the Ice. That title introduced series protagonist Detective Erika Foster, who would go on to feature in The Night Stalker, Dark Water, Last Breath, Cold Blood, and Deadly Secrets. His books—which include a bestselling series of romantic comedies—have sold more than 3 million copies and have been translated into 29 languages. This December, he introduces a new heroine, Kate Marshall, in Nine Elms.

The story opens in the fall of 1995, as a serial killer known as the Nine Elms Cannibal is leaving a trail of bitten and bloodied bodies across London. Up and coming detective Kate Marshall is on the case—though an ill-advised tryst with her supervisor, Detective Chief Inspector Peter Conway, threatens to derail her promising career. But Kate realizes more is at stake than her professional livelihood when she uncovers compelling evidence that Conway is the culprit; indeed, a late-night showdown leaves Kate—unknowingly pregnant at the time—hospitalized and Conway in custody. The two will have no direct contact until fifteen years later, when a copycat begins mimicking the infamous crimes.

In 2010, we find Kate—a recovering alcoholic whose fourteen-year-old son, Jake, lives with her mother—lecturing at a university on England’s coast; it’s a prison of her own making. She’s worked hard to put the demons of her past behind her, and to reconcile fractious relationships, only to see her sobriety threatened when a fresh spate of corpses begins to turn up bearing Conway’s unmistakable MO. Investigative instincts intact, Kate enlists her dynamic teaching assistant, Tristan Harper, to explore the case with her when the authorities fail to inspire proper confidence. After all, she was meant to be Conway’s fifth victim—and each subsequent murder increases the likelihood that the killer will come for her next.

The narrative unfolds in the third person, and alternates between Kate and Conway (mostly). The build-up to the (all but inevitable) finale grows increasingly intense as Conway and his successor circle closer to one another. Bryndza offers some truly chilling moments that underscore the darkness and depravity of human nature (as well as some quieter ones that add levity). While the dynamic between the two is an obvious nod to Thomas Harris’s The Silence of the Lambs, it’s more allusion than imitation—and the resulting sense of familiarity might have the effect of lulling readers into a false sense of security. But the book’s true gravitas comes from Kate’s desire to do right by her son, affording Jake a promising future despite the sins of his parents.

With Nine Elms, Bryndza proves that he’s got another blockbuster saga on his hands. Kate Marshall is a bona fide superstar—an appealing mix of strength and vulnerability who shows that the damage of our past doesn’t need to define us or defeat us but that it can spark our determination to be smarter, stronger, and singularly successful. That’s a hero, and a notion, worth rooting for.