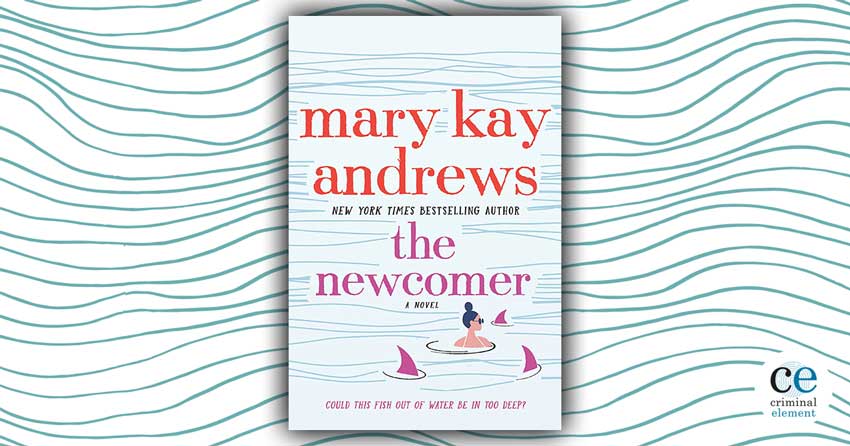 The Newcomer by Mary Kay Andrews follows Letty Carnahan, who recently fled from New York with her murdered sister’s child, Maya, to escape suspicion and start a new life working at a tourist destination in Florida—but her sister’s past and the details of her murder may prove more difficult to outrun than she could ever imagine.

Mary Kay Andrews—the “Queen of the Beach Reads”—may not be a name that ordinarily passes the lips or minds of mystery lovers, but she’s been an indomitable force in the realm of contemporary fiction for more than two decades. A perennial New York Times bestseller, she has more than 20 novels (and a cookbook) to her credit and is also a co-host and co-founder of the popular Friends & Fiction Podcast. Her most recent release, The Newcomer, proffers abundant crossover appeal.

The story opens as an emotionally and physically overwrought Letty Carnahan pulls her “crappy” little Kia into the parking lot of the Murmuring Surf Motel with her 4-year-old niece, Maya, asleep in the backseat. The no vacancy sign that greets her arrival is just one more insult in a lifetime of disappointments. After all, this is no pleasure trip to Florida’s Treasure Island; rather, it’s the act of a desperate woman looking to escape the person(s) that bludgeoned her younger sister, Tanya, and left her to bleed out on the floor of her New York City townhouse.

Despite the lack of available accommodations, Letty—accompanied by little more than Mia and the “go bag” her sister fortuitously stuffed with cash and a diamond ring—convinces the motel’s owner/manager, Ava DeCurtis, to find her lodging in exchange for a reasonable rate and services rendered. It’s an arrangement that suits both Letty and Ava but one that’s met with disapproval from Ava’s son, Joe, who just so happens to be a detective with the local police. Regardless of his suspicions, she vows to make things work—at least temporarily. Because there is no Plan B and precious few options that would allow her to live off the grid.

As predicted by Tanya, Evan Wingfield—the sketchy real estate “entrepreneur” that Letty once worked for and dated before he dumped her for her younger sister (causing a years-long rift between the siblings)—would be the man responsible in the event of her death. They were in a bitter custody dispute over Maya, and Tanya planned to use her knowledge of Evan’s illegal business practices as leverage in her attempts to relocate to Los Angeles. But despite this pre-mortem proclamation and her ex’s obvious motive, it was Letty who was seen leaving the scene of the crime with Maya in tow, and it’s Letty and Maya who the authorities are now looking for.

The Murmuring Surf Motel—a quaint establishment catering to a cast of loyal-if-demanding guests who return annually—is not some random landing point; it’s a place that Letty discovered in an old magazine article belonging to her sister. While Letty, who accepts work as Ava’s assistant manager, initially believes she’s found a reprieve from the fallout of her sister’s duplicitous nature, it soon becomes clear that Tanya had her own history in Treasure Island—and that her secrets have sinister connotations. Consequently, everything Letty thought she knew about her sister’s life (and death) is now in question, and she comes to realize that she may have more to worry about than the law (or Evan, even).

The author does an impressive job balancing the comedic (and often heartwarming, occasionally maddening) aspects of life at a tourist destination (Bingo, anyone?) with the gravity of Letty’s circumstances. The more acclimated she and Maya become, the greater the stakes. While Evan Wingfield is undoubtedly a bad man, the introduction of Tanya’s other criminal associates begs the question: is he the bad man? Red herrings abound that are bolstered by compelling backstory, multiple viewpoints, and even some technological trickery. Further, Andrews melds familiar elements—a resourceful female protagonist, romantic intrigue, endearingly quirky secondary characters, and an appealing beachfront setting among them—with the requisite mystery ones, culminating in a whodunit that’s as deceptively consumable as a watermelon infused with tequila.

The Newcomer is one of those books that beautifully illustrates the importance of suspense to story regardless of its categorization. While not a traditional mystery, there’s no denying that the core components—including those provocative W-questions that propel plots forward—are in place and skillfully executed (if you’ll pardon the pun). Indeed, “genre fiction” (whatever that is) such as whodunits or summer reads often has surprising depth and nuance—much like the waters of a tropical beach that lure you in with their seeming tranquility before sweeping you away in the undertow.