October 4, 2021
Vera Kurian's Never Saw Me Coming is a fast-paced thriller following Chloe Sevre, a freshman honor student who spends her time doing yogalates, attending frat parties, and plotting to kill Will Bachman, a childhood friend who grievously wronged her... 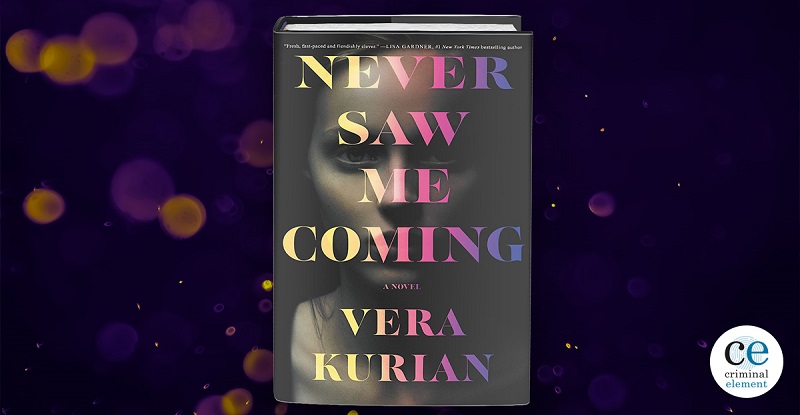 Chloe Sevre is pretty, demure, and out for blood. As an incoming freshman to (the fictional if loosely based on Howard University) John Adams University, she’s spent the last six years keeping tabs on a former friend who is two years her senior, and meticulously planning an act of deadly revenge. It’s almost a shock when she finally does encounter her target at a frat party, after so long apart:

I looked up and suddenly I couldn’t hear the music that was pumping through the house, the laughter or the screeches, the pinging of beer pong balls. It was like time froze. Will Bachman was literally leaning over the couch, grinning down at us. I felt a steely calmness come over me.

I smiled at him, reminding myself that for it to look real the smile had to reach my eyes. “I’m Chloe,” I said. I waited to see if he would recognize me–it had been years. Everything I did in the next fifty-two days would depend on if he recognized me, and how my calculus would have to change if he did. But I was betting on his not recognizing me. I grew up. I changed my name. But I never forgot.

Chloe isn’t your standard girl-with-a-grudge though. She’s a full-blown psychopath with a clinical diagnosis. In fact, that’s most of the reason she can afford to be here in the nation’s capital. The psychology department at John Adams, led by pioneering researcher Dr. Leonard Wyman, is running a study on psychopathy with the aim of helping those diagnosed adjust to and eventually lead perfectly normal and fulfilling lives. While Chloe thinks her life is pretty normal and fulfilling already, she is glad for the opportunity to get closer to her prey, and not have to take on massive amounts of student debt to do it.

Seven students, including Chloe, have been offered full-ride scholarships in exchange for participating in the study. Their enrollment is strictly anonymous, mostly for their own sakes but also to quell any prejudice against, or panic over, having so many psychopaths concentrated in one area. But when a killer starts targeting the study participants, Chloe finds herself not only planning Will’s murder but also playing a cat-and-mouse game with someone intent on murdering her. She’ll have to not only identify her fellow volunteers but also figure out whom among them she can trust.

A fascinating look into a controversial subject, Never Saw Me Coming considers the idea of psychopathy and concocts a briskly-paced, dark academia thriller around the concept. Vera Kurian is careful to explain the diagnosis in a way that’s simple enough for readers to understand without consigning it to a cut-and-dried stereotype, as Dr. Wyman explains:

“[I] don’t view it as that different from other biologically based disorders, like schizophrenia.”

“Like a mental illness, then.” She said it flatly, as if displeased.

“Okay then, let’s say it’s more like a biologically based limited capacity to understand and feel the full range of human emotion or manage impulse control.”

“You make it sound like dyslexia or something. My mom says its pathological selfishness.”

“I wouldn’t use the word pathological. You lack empathy because of the way your brain functions. Because you don’t feel fear the same way, you end up seeking excitement.”

You don’t have to be a psychopath to vicariously enjoy the chills and thrills of this page-turner though, as Chloe and the few students she reluctantly trusts try to get to the bottom of who’s hunting them and why. Abnormal psychology aside, the book is also a convincing portrait of college life in Washington, D.C. Regular readers of my reviews know that I can get positively apoplectic when authors do a bad job of depicting this city, but Ms. Kurian clearly knows what she’s talking about (Dave Thomas Circle! The columns at the National Arboretum! The relentlessly hunger-inducing restaurant name-checking!)

And while Chloe is the narrative focus of the novel, the true heart and soul—and honestly the most sensible person here—is the terrific D.C. native Andre Jensen, who gets involved in far more than he bargained for when he enrolls at John Adams and falls in with Chloe and her manipulative ways. Will either of them survive? It’s a testament to Ms. Kurian’s story-telling skill in presenting this shifting perspective narrative that I genuinely cared for and worried about both of these very different, damaged characters.