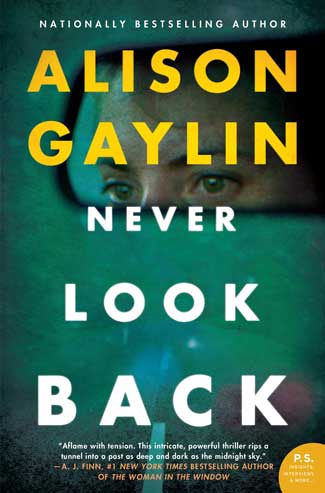 Never Look Back by Alison Gaylin is an absorbing, addictive tale of psychological suspense with a Serial-esque podcast twist.

Quentin Garrison is not a man who puts himself first. Raised, if one can call it that, by a junkie mom, he’s embarked on adulthood mistrustful of others but is finally thawing under the combined attention of his best friend and business partner, Summer, and his husband, Dean. So when they gang up on him to tell a new story for the podcast Quentin and Summer produce, Quentin is reluctant to do it but even less inclined to say no.

This dilemma occurs because the story they want to report for their cold-case podcast, Closure, is a story with which Quentin is already intimately involved. His aunt, Kimmy, then a 4-year-old girl, had been one of the last victims of the Inland Empire Killers, a teenage couple who had gone on a murderous rampage in the 1970s.

Kimmy’s death had destroyed the Sharkey family. Grace Sharkey, her mother, had committed suicide soon after, and Reg Sharkey, her father, had in his grief driven away his teenage daughter, Kate, who would spiral into a life of drug addiction before becoming Quentin’s mom. The Inland Empire Killers themselves, Gabriel Allen LeRoy and April Cooper, would be thought to have perished soon after Kimmy’s death in a fire out in the desert that destroyed the isolationist compound where they had sought refuge.

But then, a reliable source contacts Summer claiming that April is still alive and living as a woman named Renee Bloom on the East Coast. Before going to her business partner with the idea, Summer does a little digging to make sure she isn’t reopening old wounds for spurious reasons. Once she becomes convinced that there’s a real story here, she consults with Dean, and together they push hard for Quentin to cover the case. After all, if they can find closure for others, why not for themselves?

So Quentin is forced to not only confront the man he blames for his mother’s inability to love him but also hard truths about parenthood in general.

He cleared his throat and spoke into the recorder, the mic catching his voice along with the roar of traffic on Fifth Avenue, the bleat of horns. “All parents lie. That’s just a fact. For some of us, the lies are designed to preserve our innocence: Santa is real, for instance. Trying for a baby means praying really hard. Other times, the lies are deeper, more material. Parents tell us those lies not to protect us, but to protect themselves. They don’t want us to know who they really are.”

He’s not the only one who’s coming to a reckoning with family though. Over in New York, journalist Robin Diamond is anxious that her husband is having an affair, but a phone call from Quentin soon heralds even greater trouble. Quentin asserts that her mother, Renee, knows a lot more about April Cooper than she’s ever let on. Robin refuses to believe that her kind, sweet mother could have anything in common with a brazen serial killer, but when a violent home invasion sends both of her parents to the hospital, she begins to question everything and everyone she knows and trusts.

Trust is one of the main themes of this compelling tale of psychological suspense. Told through the viewpoints of its cast of characters, Never Look Back discusses the obligations inherent or otherwise in family relationships as it reveals the truth behind long-ago killings that have been essentially flattened out to two-dimensional renderings both by a sensationalist media and a judgmental public. Based on the true-life 1950s crime spree of Charles Starkweather and Caril Ann Fugate, it refuses to go for the easy out, particularly when it comes to characterizing April (based on the 14-year-old Caril Ann) as a soulless thrillseeker. This is helped in large part by Alison Gaylin’s choice to include the letters that the young April wrote to her future daughter while caught up in Gabriel’s madness:

There is something bad inside Gabriel. It’s like lava in a volcano. If you don’t see it or feel it, it can’t hurt you, so it doesn’t seem real.

But it is real. This bad thing is always there, bubbling closer and closer to the surface, until finally, it explodes out of him, destroying everything it touches. You know you can’t stop it, not any more than you would be able to stop real lava in its tracks. So all you can do is stay as quiet as possible and pray with everything you have that it doesn’t touch you too.

The voice of young April is the most affecting in a cast of characters who are all easy to root for, even as you’re not entirely sure who to believe. What you know you can’t believe is the conventional narrative that paints people as cardboard cutouts and assumes the worst of them, in large part to distance itself from any responsibility, much less culpability, in their crimes.

Never Look Back asks us to be unafraid to look deeper, to believe in the healing power of the truth, and to accept the consequences and be good to ourselves regardless. The good guys in the book learn these lessons; the bad guys, not so much, embrace denial to its destructive ends. I will say that the ending was more bittersweet than I expected, but I’m happy for all the survivors, even as I’m sad that not everyone I cared for in this book made it to the end.