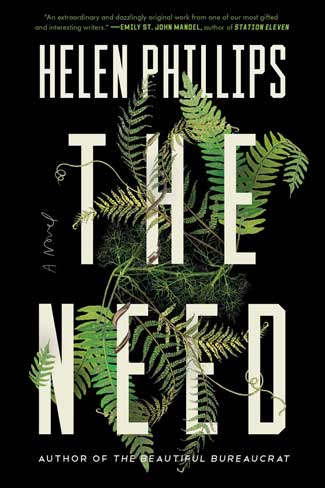 The Need by Helen Phillips is a subversive, speculative thriller and a glorious celebration of the bizarre and beautiful nature of our everyday lives that comes to life through blazing, arresting prose and gorgeous, haunting imagery.

Molly is alone with her two children when she hears footsteps in the other room. Her husband, David, is away. She’s left her phone in the living room. Molly tries to keep her kids—3-year-old Viv and baby Ben, who do not understand the danger—under control. She is unsuccessful, and Viv darts out into the living room.

Standing in the middle of the room is a figure wearing a deer mask who leaves cryptic, prescient instructions for Molly. The mother of two is told: IF YOU DO NOT COME YOU WILL REGRET IT FOREVER. To protect her children, Molly follows the directions and finds herself face to face with a desperate woman who needs help only Molly can give.

The Need by Helen Phillips is a mind-bending thriller set against the backdrop of everyday suburbia. From all angles, Molly’s life doesn’t appear too out of the ordinary. She’s a mother of two. Fairly happily married. She’s a scientist working at an ongoing archeological site called “the Pit” near a Philips 66 gas station. Yet there is so much going on under the surface of this story.

The opening scenes of The Need are incredibly tense in a primal way—a mother who needs to protect her children from an outside threat, which is complicated by the fact that the kids aren’t aware of the danger they’re in. Watching Molly navigate the external threat and witness the consequences of her children’s naïve actions is very compelling. It’s very easy to turn the page and keep reading.

However, the initial tension is complicated by a little something extra. A strange sense of unreality overlays the entire situation, which keeps the reader off-balance (in the best way). Molly is sleep deprived. There’s a haunting sense of strangeness surrounding her and her perceptions of things. Phillips introduces this feeling of unreality early:

This problem of hers had begun about four years ago, soon after Viv’s birth. She confessed it only to David, wanting to know if he ever experienced the same sensation, trying and failing to capture it in words: the minor disorientations that sometimes plagued her, the small errors of eyes and ears. The conviction that the rumble underfoot was due to an earthquake rather than a garbage truck. The conviction that there was something somehow off about a piece of litter found amid the fossils the Pit at work. A brief flash or dizziness that, for a millisecond, caused reality to shimmer or waver or disintegrate slightly. In those instants, her best recourse was to steady her body against something solid—David, if he happened to be nearby, or a table, a tree, or the dirt wall of the Pit—until the world resettled into known patterns and she could once more move invincible, unshakeable, through her day.

For example, the archeological site where she works is filled with discoveries that don’t make much sense, which is the draw for tourists and other scientists. There are plant fossils not found anywhere else in the fossil record or in existing plant descendants. Then, there are the slightly off, human-made finds—like a Coca-Cola bottle with the writing leaning to left instead of the right and a plastic-soldier toy with a monkey tail.

Aside from their eccentricities, the artifacts seemed to correspond to similar known objects from specific eras: the pre-Columbian potsherd, the Bible from the early 1900s, the toy soldier from the 1960s, the Coca-Cola bottle from the mid-1970s, the Altoids tin from the 1980s.

Anyhow: on the tours, Molly let the objects speak for themselves.

The Bible was small, five and a half inches by three and three-quarters inches, an inch and a half thick; slightly water-damaged on the lower right-hand corner; its maroon binding worn to pink in places; the words HOLY BIBLE golden on the cover.

Roz had left it open in the glass case to the first page of text:

In the beginning God created the heaven and the earth.

And the earth was without form, and void;

and darkness was upon the face of the deep.

And the Spirit of God moved up on the face of the waters.

And God said, Let there be light: and there was light.

And God saw the light, that it was good:

and God divided the light from the darkness.

And God called the light Day and the darkness she called Night.

…Every time she saw the Bible, even there beneath the glass, Molly experienced the same dangerous charge, that buzz in her fingertips a month ago when she first carved away the dirt around it. The bliss of spotting that maroon edge, the shock that she hadn’t noticed it until this second the ridiculous passing conviction that it had just sprung into existence. She felt the slightest sensation of heighted gravity at that moment; even now she could sometimes almost feel it, an extra heaviness tugging at her in the Pit.

…To open it to this first page. To skim the familiar language. To crash into the new pronoun.

When Phillips reveals what this underlying strangeness is (and I’m trying to avoid spoilers, so apologies for any crypticness), the reader will speed through the pages—not necessarily to get to the end but to hunt down the next piece in this reality puzzle.

Helen Phillips has crafted a captivating, devastating novel with The Need. The meticulous design of the novel—fast chapters and beautiful language-play—only add to the overall effect. When you look up from the book, it’ll take a hot second to reorient yourself to the light of day. It may seem cliché to say “I finished this book in one sitting,” but … I finished this book in one sitting.