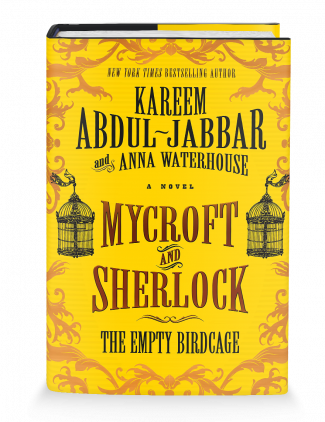 Mycroft and Sherlock: The Empty Birdcage

Mycroft and Sherlock: The Empty Birdcage is the third installment in the series from authors Kareem Abdul-Jabbar and Anna Waterhouse. When a distant relative of Queen Victoria has been slain by the Fire Four Eleven serial murderer, Mycroft investigates with Sherlock, whose interest in the criminal mind grows into an obsession.

The dynamic historical fiction duo of Kareem Abdul-Jabbar (possibly the greatest basketball center of all time and recipient of the Presidential Medal of Freedom) and his partner Anna Waterhouse (award-winning screenwriter and acclaimed script consultant) first drew mystery world acclaim in 2015 with their outstanding novel Mycroft Holmes.  This pastiche invented an exhilarating Trinidadian back story for a character Sir Arthur Conan Doyle penned as profoundly brilliant yet completely sedentary: Mycroft Holmes, the elder brother of the world’s most famous consulting detective.  Since then, Abdul-Jabbar and Waterhouse have written two sequels, and their latest installment maintains the excellent quality we have come to expect from two of the best Sherlockian authors currently in the game.

While the economic world of 1873 teeters on the verge of collapse and then crashes spectacularly, begetting bankruptcy and a suicide attempt, the financial crisis serves as little more than deftly executed wallpaper for much grittier affairs.  The Empty Birdcage is a dually-plotted novel—one track follows a scrappy and refreshingly naïve Sherlock Holmes as he gets himself tossed out of college in order to pursue the elusive Fire 411 killer, and the other track joins Mycroft Holmes as he searches for his erstwhile flame Ai Lin’s missing fiancé.

Personal conflicts arise at every turn; while Mycroft frets over his brother’s safety but allows Sherlock to investigate the Fire 411 serial murders as a confidential service to the Crown, he also is forced to navigate his affections for Ai Lin, a medically trained and fiercely independent Hakka woman whose marriage has nevertheless been arranged to one Bingwen Shi.  The Shi family’s ancient pedigree combined with the Lin family’s influential shipping business makes the alliance attractive despite Ai Lin’s reputation for being “hard-headed,” a quality that both attracts and alarms Mycroft.  In the sudden and ominous absence of the groom, passionate social worker Ai Lin has taken to tending the destitute in low rookeries, and Mycroft is left to determine with his stalwart Trinidadian friend Cyrus Douglas what, if anything, is to be done about it all.

Abdul-Jabbar and Waterhouse are marvelous at humanizing the legendarily prickly Holmes brothers, whose loyalty to each other is often tested but never in doubt.  For any lover of Doyle’s works, there is something deeply endearing about watching the sleuth who will one day become “the best and wisest man” Dr. John Watson had ever known getting himself throttled for blurting out imprudent deductions, begging Mycroft for funds, and sabotaging his own Cambridge education by cooking up “various concoctions of a dubious nature” and experimenting on fellow students.  One easily pictures a whippet-thin teenager entirely heedless of danger, awkward in his skin and being testily ordered to put out his cigarette by his elder sibling, embarking on the career that would make him a household name.

Better still is the nuanced personal history the authors gift to one of the most eccentric figures in the entire Sherlockian canon.  Mycroft Holmes is an embodied enigma, unknown to Watson himself until years after meeting Holmes, but herein a three-dimensional human being with desires, frustrations, and a serious heart condition he keeps secret from those dearest to him.  He is calculating but kind, hindered physically but aided by intelligent, able-bodied cohorts versed in observation and martial arts.  The man who will one day become a clearinghouse for state secrets and a master puppeteer is profoundly relatable in The Empty Birdcage, as Mycroft increasingly becomes a fully fleshed protagonist of Abdul-Jabbar and Waterhouse’s own devising.

It is equally stimulating to be exposed to fresh aspects of setting in addition to character.  Whereas Victorian London was inevitably painted in pale brushstrokes by Doyle, Abdul-Jabbar and Waterhouse’s England is populated by denizens of all callings and colors, and the reader is immersed not only in the plight of the impoverished native Britishers on whose behalf Ai Lin battles so ardently, but in the dockside realm of the recently emigrated, and the severely limited world of the educated Chinese female, whose destiny lies in her family’s hands rather than her own.  Ai Lin as viewed through Mycroft’s admiring, sympathetic eyes is a complex, compelling woman—at once empowered and crippled by her honorable nature.

Throughout, Abdul-Jabbar and Waterhouse’s writing and research shine, from the sweetness of egg-and-sherry cocktails to the blackened skin of the virulently infected smallpox victim.  What began as a remarkable standalone in Mycroft Holmes has become a series eagerly anticipated by not only the Sherlockian community, but lovers of well-executed historical fiction in general.  One can only hope that The Empty Birdcage will prove but the third installment of a a great many more homages to the brothers Holmes.

See More: Our Review of Mycroft and Sherlock, the 1st Book in the Series