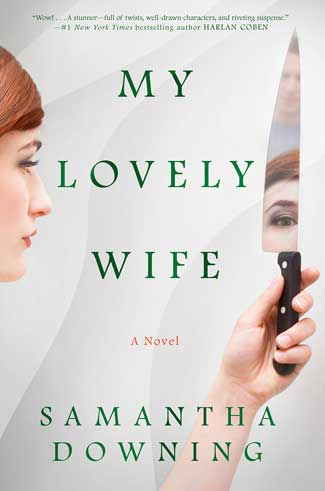 My Lovely Wife by Samantha Downing is a wildly compulsive debut thriller about a couple whose 15-year marriage has finally gotten too interesting.

Y’all, that was bananas.

I read a lot of mystery novels, and I have done so since long before I started reviewing here for Criminal Element. Because of my deep familiarity with the genre, it’s perishing rare for me to finish a mystery and actually be shocked by what has transpired. Surprised, definitely; entertained, often. But to finish a book and marvel at what I’ve just read?

The last psychological thriller to have that effect on me was Gillian Flynn’s Gone Girl, which for the longest time seemed to be the standard bearer for truly probing, truly messed-up mysteries. But now we have My Lovely Wife, which heralds the arrival of a writer who deserves to be a superstar, the previously unpublished but terrifically talented Samantha Downing.

The novel is told from the point of view of the unnamed husband, a country club tennis pro, who is married to the beautiful Millicent, a real estate agent. They have two kids, a 14-year-old named Rory and a 13-year-old named Jenna. They’re your standard American family, living a little bit beyond their means. Millicent is the strict parent, while her husband is more of a pushover for two kids testing their boundaries as they grow into their teenage years. So far, so normal—except that Millicent and her husband share a decidedly abnormal hobby: serial murder.

It started innocently enough, only a few years before the start of the book’s narrative, when the husband used deadly force to protect Millicent from imminent harm. The bond this created between the couple—as well as the sizzle it brought to their sex life—only strengthened when they found themselves killing someone else who threatened their family stability. Soon, husband and wife are looking for ways to murder on a regular basis, all while juggling work and kids and social lives.

When the body of their latest victim is found, however, the husband is confused. He thought they’d done away with the woman months ago, but forensic evidence shows that she was alive until fairly recently. Millicent is eager to tell him of the new twist she has for their hobby: to lay their killings at the feet of a previous serial killer. Her attempt is not only successful but sparks tremendous news coverage, focusing not only on the killer but also on his prior victims and their similarities. This has unintended consequences for their family, especially for their sensitive daughter.

Jenna stands on the white tile floor with her feet surrounded by locks of dark hair. She looks at me, and her eyes seem larger than ever. Jenna has cut off all her hair. Shorn down to the scalp, no more than an inch long.

Behind me, Millicent gasps. She rushes past me, to Jenna, and holds her head with both hands. “What have you done?” she says.

I say nothing, though I know the answer. I know what Jenna has done. The realization makes me freeze; my body roots itself right into the persimmon-colored rug on Jenna’s floor.

“What the…” Rory is in the room now, staring at his sister, at the hair on the bathroom floor.

Jenna turns to me and says, “Now [the serial killer] won’t take me, will he?”

The husband immediately begins to regret the direction he and Millicent have taken with their hobby. But trying to be a good father, he soon finds, must compete with the demands of being a good husband.

Never has a thriller cared so much about domestic life and the unintended consequences parents’ actions have on their children. Ms. Downing writes like a house on fire, with easily accessible prose that lulls you into forgetting that our main characters are psychopaths. She also skewers our notions of what a “good” victim is, ruthlessly pointing out the hypocrisy of the general public when it comes to treating female victims as either virgins or whores. This, for example, is what happens when the adventurous sex life of our murderous couple’s latest victim comes to light:

At the club, the talk starts to change. People stop saying it is a travesty and a shame. Some even stop saying [the serial killer] is a monster. Instead, people start asking how [she] could have prevented it. How she could have avoided being a victim.

[My tennis client and friend] is one of them. The stories about [the victim] confirm her belief that trouble comes to people who look for it. And in her mind, sex counts as trouble.

The twists are unrelenting as Ms. Downing builds her tale of suburban murder and mayhem. And that ending! Just when you think everything is going to be okay, she pulls the rug out from under you one more time! I cannot even begin to describe how fiendishly plotted this book is, how the pieces of this puzzle have been so deviously, delightfully constructed. I can only recommend that you get your hands on this completely bonkers, terrifyingly clever mystery novel that deserves all the praise it gets.