March 3, 2022
Kimberly Belle's domestic suspense My Darling Husband portrays what happens when Jade is confronted by a home invader and begins to uncover the dangerous secrets her husband has kept from her. 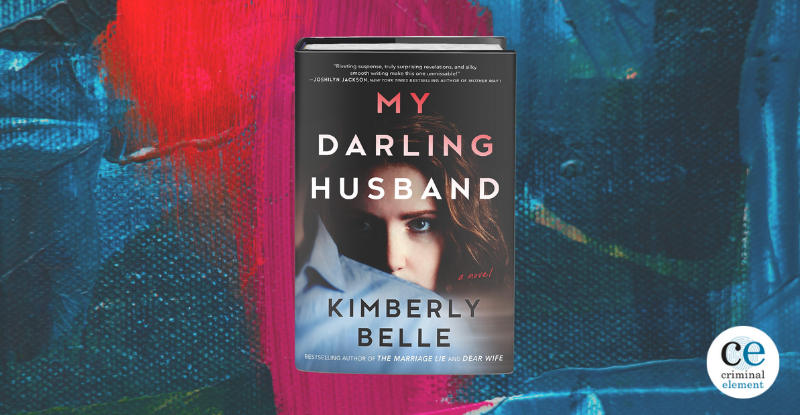 Since the success of 2019’s Dear Wife readers have eagerly anticipated Kimberly Belle’s next domestic suspense thriller. My Darling Husband has a provocative opening—a man calls a journalist and says he’s finally ready to talk. Talk about what? Then the POV switches back in time to his wife Jade.

Jade and Cam live in Atlanta where Cam is a wildly successful restauranteur and his wife is a stay-at-home mom. Jade keeps busy chivvying her kids Beatrix (8) and Baxter (6) from one lesson to another. She has noticed a man showing up in her space—at Starbucks, passing her a stevia packet (unasked) and now slouched against the Westmore Music Academy sign where Jade takes Beatrix for violin lessons. She calls Cam.

“That guy. The skeevy one I told you about, with the glasses and the comb-over man bun. He’s here at Westmore.”

“Well, maybe he has a musically gifted kid.”

I roll my eyes, lift my hands from the steering wheel. “Right. And he just happens to go to the same gym as me and shops in the canned goods aisle at Whole Foods whenever I walk through their door.”

Jade has a stalker. Hold on, is he stalking her or is he trying to get to her kids? Cam scoffs at that notion because many families in Atlanta are much wealthier. Jade points out that he’s on the cover of Atlanta Magazine. She thinks to herself that “Going to a restaurant with Atlanta’s Steak King is like dining out with a rock star.”  Cam pushes the problem back at Jade—perhaps she should speak to the security folks at the music academy.

Cam has other fish to fry, telling Jade “I’m at the shop on Bolling Way. There was a fire.” The tension flies off the page—stalkers, fires, what’s up with this family? Bolling Way is Cam’s signature restaurant—his house of cards will collapse if fire investigators suspect there’s something untoward in the fire’s origins.

Jade is very upset and her tension spills over to Beatrix and Baxter, tussling over packages of Goldfish in the backseat of the car. When they finally arrive home disaster awaits them. A masked man is hidden in the shadows of her garage. He points a gun at Jade and tells her and the children to get inside the house. The scene is gut-wrenching.

Kimberly Belle brings in another character—Sebastian, the masked gunman. He knows Jade, knows everything about her, her routine and her neighborhood. Sebastian tells Jade they shook hands once at a restaurant opening. Why is he there? What is his object? Jade offers him money, jewelry, the keys to her car but none of that interests him.

Suddenly we throttle forward in time. Journalist/interviewer Juanita is a tough questioner.

Juanita: Why don’t you start by walking us through your version of August 6.

What a pointedly skeptical question. Juanita accuses Cam of leaving a door open so the invader could get into the garage, implying she doesn’t believe him when he says they never locked the door in question. Cam takes umbrage at her statement.

Cam: And why would you accuse me of such a thing? Are you insinuating I had something to do with the kidnapping of my own family?

Juanita: I wouldn’t be the first to suggest it. In the months since the home invasion, there’s been a great deal of misinformation floating around about you, both online and in print. Most of the stories accuse you of some kind of wrongdoing.

Predictably, Cam calls the rumors “fake news.” By meeting with a journalist, does he hope to clear his name? But what happened in the months before Cam is interviewed by Juanita; to Jade, Beatrix, and Baxter, trapped in their home and to Jake, confronted with the collapse of his restaurant empire. He admitted it to himself at the time: “So there it is, ladies and gentlemen, the truth. Cam Lasky is broke.” The interview technique fleshes out the horror of the home invasion and the restaurant fire. We learn that when Jade and Cam met, he was dead broke—his “first restaurant was deep underwater.” He tells Juanita he owes his success to Jade, that she’s the designer behind the Lasky signature look and brand, something she did on a “shoestring budget.” So why doesn’t he want to revive his empire?

Perhaps the Lasky marriage cannot survive the unspoken lies between Cam and Jade: “Lies and secrets, they are like a cancer in the soul. They eat away what is good and leave only destruction behind,” Cassandra Clare. Cam was losing his shirt, Jade mourned her former life—and the ever-widening gap between them leads inexorably to tragedy. Like Dear Wife, My Darling Husband reverberates with “riveting twists and a breakneck pace;” it’s impossible to put down.