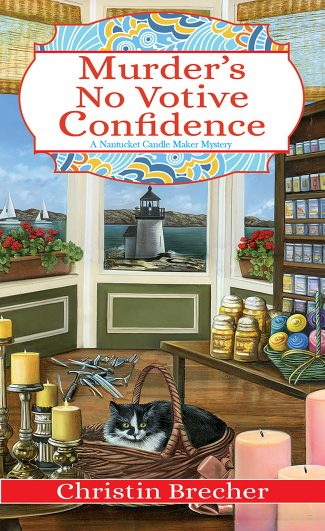 In Murder’s No Votive Confidence by Christin Brecher Nantucket candle store owner Stella Wright specializes in creating unique candles for every occasion. But someone sets the stage for murder when a Memorial Day celebration becomes a wedding to die for . . .

This charming debut cozy mystery follows Stella Wright, the 20-something proprietor of candle store Wick & Flame, as she becomes unwittingly entangled in a murder mystery and solves her way out of it. While Stella is no professional detective, she isn’t a mere retailer either, as she creates her own candles and scents in honor of both her perfumer mother and the legacy of her beloved island home:

During Nantucket’s heyday, the whalers discovered that the waxy oil from a sperm whale’s head cavity produced candles with a bright, odorless flame. These valuable candles, which accounted for at least a quarter of the island’s wealth, were sold internationally. When I learned about the island’s role in lighting the world, I knew I wanted to fuse the scents my mother had taught me with one of Nantucket’s great traditions. The Whaling Museum itself was originally a candle factory, so I like to think I’m part of a long history on the island.

Given this rich history, it’s no surprise that present-day Nantucket is a popular tourist and wedding destination. Stella takes full business advantage, accepting commissions for custom scents, designs and bulk event orders. Her latest job is to provide all this in addition to a two-foot-tall unity candle for the Sterling-Handler wedding taking place over Memorial Day weekend. Stella is good friends with Emily Gardner, the very pregnant event planner in charge of the wedding, and the two are working closely together at the Melville Inn, the wedding’s somewhat remote venue, to make sure everything goes off splendidly. And everything is until the uncle of the bride is found dead in the hotel’s Game Room, his head bashed in with Stella’s piece de resistance.

The victim, Simon Sterling, was not popular with the rest of the wedding party, and was only there because his traditionally-minded niece, Jessica, wanted her closest living male relative to walk her down the aisle since her dad had passed on several years earlier. Even in death, Simon proves a disruptive figure, as there’s a very real chance that the wedding might have to be shut down altogether. However, the police quickly arrest the bartender working at the Melville and give the wedding the go-ahead.

Stella isn’t sure whether to be more relieved or upset by this development. While she certainly doesn’t want to lose the revenue—and already has plans, with Jessica’s blessing, for a replacement unity candle that won’t carry murderous echoes—she’s also convinced that the cops have the wrong man. Bill Duffy is a gentle soul whom Stella has known all her life, and she’s unwilling to see him railroaded for the murder of a man he barely knew. With the help of a handsome reporter new to the island and the occasional assist from an old school friend who’s now a police officer, Stella is determined to get to the bottom of the mystery, using her own unique skills to track down a killer:

One thing I know about scents, is that most people like them because they remind them of something in their life. A good perfumer has more than a good nose. You need a little psychology, too. A scent can trigger a flood of memories. At that moment, the perfume on my wrist did just that. Suddenly, I was back in the Game Room, feeling nauseous this morning from Simon’s cigar scent, the one I had also picked up in his room. At the time, I knew there were other competing aromas, but I had not paused to think of them. This time, however, I realized that one of the scents was one and the same on my wrist.

Stella is a terrific heroine who’s smart, sassy and creative as she sleuths her way to the truth in a novel that isn’t afraid to remind the reader of how easily said truth can be skewed by perspective. The mystery itself is well-constructed and sophisticated, featuring a host of colorful characters with hidden motives. My personal favorite was the Italian actress Gina Ginelli, who injected a dose of glamour every time she showed up on the page. With this great cast and setting, Murder’s No Votive Confidence was a very enjoyable take on the country house mystery.

I usually skim included excerpts, if not skip them outright, but actually found the one for Christin Brecher’s follow-up novel in the series, Murder Makes Scents (due out in March 2020,) to be very intriguing, as it takes Stella away from her island home to visit the perfume capital of the world and incidentally solve a murder while she’s there. This bodes well for what looks to be an exciting new cozy mystery series that marries past with present and the familiar with the foreign to create something truly fresh. I’m already looking forward to reading more.