Book Review: Murder Returns to the Precipice by Penny Goetjen 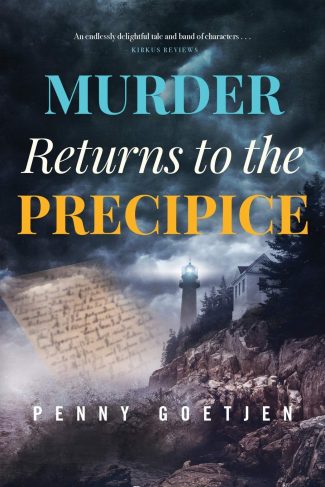 Murder Returns to the Precipice

Murder Returns to the Precipice by Penny Goetjen is the third novel in the Elizabeth Pennington series set on the shores of Maine.

Connecticut’s Penny Goetjen is a national award-winning author whose mysteries have earned acclaim for their engaging characters, ambient backdrops, and subtle use of the paranormal. Her debut novel, The Empty Chair: Murder in the Caribbean (2016), received the Mom’s Choice Award. The author’s second book, Murder on the Precipice (2017), introduced Elizabeth Pennington and won Gold in the Human Relations Indie Book Awards for Contemporary Fiction. Murder Beyond the Precipice followed last year. Goetjen—a member of Mystery Writers of America, Sisters in Crime, and the Connecticut Authors and Publishers Association—revisits her protagonist, and the rocky coast of Maine, with October’s Murder Returns to the Precipice.

As the story opens, readers find Elizabeth Pennington along with her boyfriend and business partner, Kurt, overseeing the grand re-opening of Pennington Point Inn, which was nearly destroyed in a hurricane some years ago. What should be a celebratory occasion, however, is marred by a series of disturbing events that not only threaten to derail daily operations but also jeopardize the safety of guests and staff. First, a young woman dies tragically in the inn’s fitness center—and her death, though seemingly an accident, is later deemed suspicious. Then, Elizabeth is alerted to the town’s plan to start foreclosure proceedings on the property due to a fiscal oversight. And there’s also the unfortunate matter of a second body turning up.

It’s a lot, and the fact that Elizabeth is still working as an interior designer (which requires her to travel to Connecticut regularly) only complicates things further. The stress of the circumstances coupled with Elizabeth’s suspicions about Kurt’s personal and professional pasts—he was once an FBI agent and may have been engaged to another woman—leave the future of their relationship in question. Fortunately, Elizabeth finds a welcome distraction with the discovery of an old diary written by her grandmother, who previously ran the inn. The riddles contained within hint that there’s treasure buried somewhere on the property. And Elizabeth has her trusty canine companion, Buddy, to help her sniff it out—but only if she can outwit a killer.

Goetjen writes with alacrity, which compliments the frenetic pace necessitated by the book’s plot; further, her prose is elegant-yet-earthy. Traditional mystery fans will appreciate the elements of who-and-why-dunit, but there are also healthy injections of comedic relief, romantic intrigue, and supernatural happenstance to both offset the central conflict(s) and broaden appeal. Equally important, the principal players are compelling enough to elicit the readers’ care. It should be noted that, while the story can stand alone given its requisite exposition, the continuation of characters and circumstances may prove more accessible to those who are familiar with the series’ earlier installments.

Murder Returns to the Precipice is brimming with promise and peril—a richly textured mystery that’s both charmingly atmospheric and cunningly staged. Be forewarned: Like the coastal waters of Maine, this story will lull you in with its seeming tranquility only to sweep you away in the undercurrent. Take a deep breath and surrender yourself fully. Penny Goetjen is a mighty force!