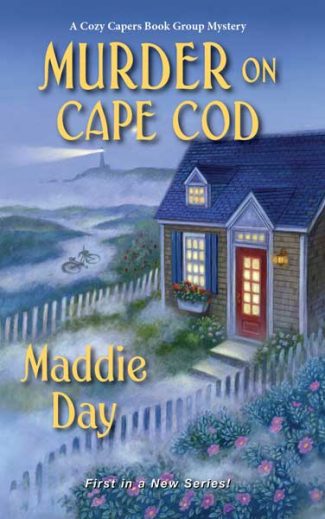 Murder on Cape Cod by Maddie Day is the first book in the Cozy Capers Book Group mystery series.

Agatha Award-nominated, pseudonymous author Maddie Day—aka Edith Maxwell, acclaimed writer of short crime fiction and historical mysteries—is no stranger to the commission of felonies. The President of Sisters in Crime New England, she has written five Country Store Mysteries as well as multiple books under the Maxwell moniker. Her newest, Murder on Cape Cod, launches a meta, cozy-centric saga, and will be available exclusively in print at Barnes & Noble locations for one year before expanding to additional platforms.

As the story opens, readers are introduced to Mackenzie “Mac” Almeida, a business owner and book lover living seaside in Westham, Massachusetts. After a weekly meeting of the Cozy Capers Book Group—her likeminded reading buddies, who devour cozies as quickly as they do pizza and wine—she has the distinct misfortune of stumbling upon a dead body (literally) while making her way home in the fog. As if that isn’t bad enough, Mac realizes that she knows the victim, local handyman Jake Lacey—and that the murder weapon, a uniquely crafted fishing knife, looks suspiciously like the one belonging to her half-brother, Derrick. Uh-oh.

See More: Maddie Day on How to Start a Book Club

Making matters worse, Mac has to answer to the town’s recently appointed Chief of Police, Victoria Laitinen, an old nemesis who seems to think that Mac herself might be a person of interest in Jake’s death. After all, Mac had been overheard arguing with Jake earlier that night about the shoddy work he’d done in repairing her roof for which she refused to pay. Despite being assigned a motive for murder, Mac is far more concerned about Derrick, a single father whose suspicious behavior—abrupt phone calls, unexplained disappearances, and a relapse with alcohol—seems to indicate that he has something to hide.

Given the stakes, Mac comes to the realization that merely reading mysteries isn’t enough; instead, she’s going to solve one—and with the help of her fellow book group members (the town librarian, a candy maker, a package store owner, and a retired cop among them), who know the ropes and the tropes of the crime novel. Questionable characters abound—including  a visiting businessman with ties to the victim, a real estate agent from the West Coast, an enigmatic young girl of mixed emotions, and a tight-lipped private investigator—but Mac’s efforts to suss out a primary suspect other than her brother are tempered by the demands of owning and operating her bike shop. Still, she makes enough noise to attract the attention of somebody who won’t hesitate to add her name to their hit list.

The author’s premise is both appealing and clever, and her bookish shout-outs (reminiscent of those within Carolyn Hart’s Death on Demand series) will fortify (sub) genre buffs. But the best elements, arguably, are her colorful cast of characters (which include a feisty parrot named Belle), the ambient Cape Cod setting, and the overriding sense of community that connects the two. While Day’s storytelling sensibilities sometimes come across as more classic-minded than contemporary, and her younger characters can verge on being amorphous of age, there’s an underlying sense of goodwill and gallantry that transcends demographics.

Hungry? Doreen Sheridan cooks straight from the pages of Murder on Cape Cod

With Murder on Cape Cod, Maddie Day has written a book that will beckon to every mystery lover who’s dared to wonder what would happen if they were to find themselves embroiled in a real-life whodunit. A promising launching point for a series that has infinite potential and possibilities.