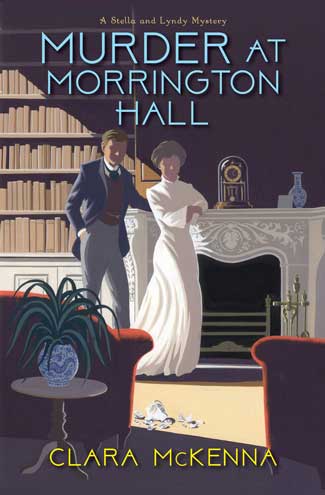 Murder at Morrington Hall by Clara McKenna is the first in the new Stella and Lyndy cozy mystery series.

Murder at Morrington Hall premieres Clara McKenna’s Stella and Lyndy mystery series. Huzzah! Mystery series lovers are always on the hunt for something new. A successful series needs a great premise plus a landscape that is fraught with possibilities for future stories, and by choosing an “American dollar princess” as her heroine, McKenna sets the stage well.

The year is 1905, the tail end of the “Gilded Age,” a phrase coined by Mark Twain to describe the late 19th century: “By this, he meant that the period was glittering on the surface but corrupt underneath.” The formula of American cash in exchange for entry into the impoverished British aristocracy seems dispassionate at best.

Stella Kendrick is an American heiress from the bluegrass state of Kentucky. She has crossed the Atlantic to attend a wedding in the English countryside. Viscount “Lyndy” Lyndhurst, the Earl of Atherly’s son, is to be married. Her very wealthy father is the proud owner of some magnificent racehorses, which he is giving to the viscount as a wedding present.

Stella is excited for the adventure, though she is more comfortable on the back of a thoroughbred or in a stable than drinking tea or making small talk. She says what’s on her mind, relishes good food, and remembers the names of servants. Stella has never visited a stately home, a place without “a single fence—barbed, picket, or stone—anywhere to be seen.” She is especially taken with the New Forest ponies, grazing freely on a hill in the distance. But stables, not verdant English landscapes, interest her most. A keen observer, she notes signs of neglect.

Stella reached the gardens. From a distance, they had looked like pictures of impeccable tidiness and tranquility. But as Stella passed through them, she noticed dandelion weeds sprouting between stones in the path; clusters of last years’ roses, which needed to be deadheaded or pulled out altogether; and branches of yew that jutted haphazardly from the hedge, which needed to be clipped. The fountain, an algae-covered marble statue of a cherub holding a basket of round fruit, spurted out a peaceful trickle of water, but brown leaves clung to the bottom of the pool. A bit of disorderliness she hadn’t expected. She didn’t like it.

Fortunately, “the stables were as impressive up close as they had been from the lane. Nothing slipshod here.” For Stella, a budding equine trainer, the “scent of fresh hay” is her favorite perfume—it smells “like home.” She almost steps in an aromatic pile of fresh manure but takes it in stride. She pets her horse Tully, “tracing the blaze from the filly’s forehead all the way down to her muzzle.” When Stella tells the groom to go easy on her beloved horse, she is shocked by his disrespectful response.

“Ah, miss,” the groom said, pointing at Stella with the dandy brush in his hand. “Does Lord Lyndhurst know you’re here? The stables are no place for a lady.”

“I’m Stella Kendrick. These are my horses, until Lord Lyndhurst is married, that is.”

“You say you’re the master’s fiancée?” The groom scoffed, pointing to her kid-leather button boots.

Mr. Gates, the stable manager, is kinder than the surly groom, cuffing him on the head and telling the assembled stableboys, “Not all ladies shun the honest smell of the stables.” Stella can’t get the groom’s comment out of her head—that she’s “the master’s fiancée.” Come to think of it, her father never did say who Lyndy was marrying. She asks Mr. Gates for the name of the viscount’s bride to be.

“Her name is Miss Stella Kendrick, of Kentucky, of course,” Lord Lyndhurst said, stepping out from the shadows.” “It might have been Miss Gladys Vanderbilt—Papa was introduced to her uncle William some time ago—but she’s not out yet. For that I’m glad. You’re by far the prettier of the two.”

His jest fueled her anger. It was a jest, wasn’t it? His attempt at flattery was insulting. She looked to Mr. Gates to confirm what the viscount claimed. The pity in his eyes emboldened her. Daddy wasn’t going to make her do this.

When Stella discovers her father’s true intent in traveling to Morrington Hall, she says, “I’m not a prize horse you can sell to the highest bidder.” But he squeezes her hand so hard that she screams and drops to her knees in pain. Lyndy and Mr. Gates rush to her side, but Stella knows no one will say no to Elijah Kendrick—he’s cold and ambitious, and if he wants to trade her for status, who’s to stop him?

Stella is between the devil and the deep blue sea—her father is cruel and ambitious, but if she doesn’t marry Lyndy, her father will find someone new, another stranger. Her father announces at tea that the local vicar is to marry them forthwith. Lyndy and Stella go in search of the clergyman, only to discover “the body of Reverend Bullmore, crumpled on the library carpet.” What an unfortunate, senseless accident. That’s what they all think until Inspector Brown tells the assembled tea drinkers that “the good vicar was murdered.”

Crass Kentuckian Elijah Hendrick is made to see that he cannot substitute another vicar for Reverend Bullmore—the wedding will have to be postponed. This gives Stella and Lyndy the opportunity to team up as amateur detectives. They talk to everyone, roaming the countryside for clues. Miss Judd, the vicar’s housekeeper, is on their list. Lyndy tells Stella that she was always very kind to him, an “awkward young lord,” when she “served at Morrington Hall during my grandfather’s day.”

“How are you holding up?” he asked.

Stella watched the viscount. So haughty, pretentious, and smug back at the house, so gentle and considerate here. Who was this man?

Lyndy’s grandfather was a renowned breeder in his day—it’s Lyndy’s father who has frittered away the family money on expensive archeological digs around the globe. Lyndy knows he must restore the family fortunes through marriage—he has as little choice in the matter as Stella—but he’s pleasantly surprised by the forthright and intelligent Miss Kendrick. Lyndy’s shock at Elijah Kendrick’s cruelty brings forth his innate protectiveness, and Stella is happy to be partnered with someone who touches her “without mal-intent.”

It’s not a traditional courtship, but it works for Stella and Lyndy. The murder has everything to do with races, gambling, and the deceptiveness of appearances. Even King Edward VII has a walk-on at the Epsom Downs racecourse. Readers will enjoy getting to know the affianced pair, watching them solve the mystery, and will undoubtedly look forward to their next adventure.