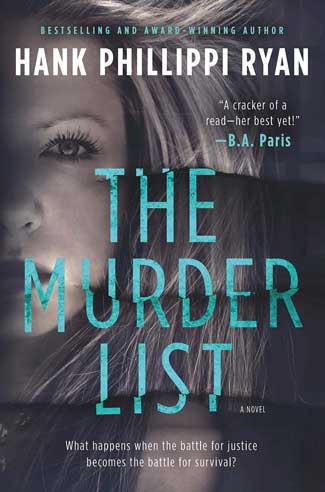 The Murder List is a new standalone suspense novel in the tradition of Lisa Scottoline and B. A. Paris from award-winning author and reporter Hank Phillippi Ryan.

Rachel North is not your average law student. For starters, she is far older than most of her classmates and married to a prestigious Boston defense attorney. She has a background in politics and a solid understanding of law as the daughter of a lawyer.

As she enters her third year of law school at Harvard, she starts an internship that collides with her previous political career and her marriage to her devoted husband, Jack. Together with her new boss, Rachel works to get to the bottom of a cold case that has haunted her memories for years.

Rachel must face the blurry lines of right and wrong in an effort to uncover who murdered an old colleague. The Murder List explores what happens when your loyalty to your husband conflicts with what is right for your career. Who do you believe when both sides of the argument seem reasonable and sane? How far is too far to go for justice?

Rachel’s new boss, Martha, takes her under her wing, giving her valuable insight into the law and relying on Rachel’s own history with the victim to find the killer. Throughout the book, Rachel struggles between two conflicting sides of the law—the prosecution, where she works alongside her new boss; and the defense, where her future and her loyalty to her husband lies. Does the truth lie, as it often does, somewhere in the middle?

Ryan’s storytelling skills are superb; she creates complex and believable characters who are, above all, human. Rachel is relatable, smart, and friendly but flawed. The story explores her most embarrassing moments, the power conflicts in her marriage, and her attraction to the idea of powerful women working to help each other in a male-dominated field.

The story is told mostly from Rachel’s perspective, but it also oscillates between the view of her husband, Jack, and her new boss, Martha. The narration switch gives insight into each character and further muddies the waters of who is in the right. Ryan also moves forward and backward in time, giving the reader insight into who Rachel was in the past and how she got to where she is in the present.

The Murder List is a fantastic story that explores the grey space between right and wrong, how women are sidelined in male-dominated fields, and what happens when you aren’t as smart as you think you are. It is a fast-paced, smart novel with twists that are both believable and unexpected. If you are looking for a story so good you won’t want to put it down, The Murder List will not disappoint.