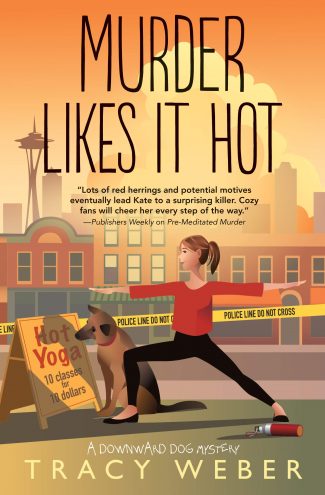 Tracy Weber, like her fictional yoga instructor Kate Davidson, owns a yoga studio in Seattle. Weber and her husband share their lives with a “mischievous German shepherd,” but Bella, Kate’s German shepherd, is a canine crime solver. Murder Likes It Hot is a realistic take into newlywed Kate Davidson’s world because—meaningful work and love notwithstanding—there’s something missing in her life.

The emptiness rolled in quietly, like a thick, cold fog. A hollow ache of longing so insidious that I didn’t notice its arrival until I’d been consumed by it. The yoga teachings give it a name: dukkha. An empty cavity. A hole in the heart.

It’s an empty cavity that only a baby can fill, and sadly, Kate and Michael are “stuck in a painful Groundhog’s Day loop six times in the running.” Their fertility problems are affecting Kate’s relationship with her best friend, Rene. Rene’s fabulously successful baby boutique is next door to Kate’s Serenity Yoga and, making matters worse, Rene is the mother of twin toddlers. Kate avoids visiting with, talking to, and being a part of Rene’s life, but enough is enough.

Five months and an equal number of negative pregnancy tests later, I stood outside the entrance to Infant Gratification, trying to gather enough courage to enter.

The best thing about a best friend is that they don’t hold grudges. Rene listens compassionately to Kate’s woes, but she doesn’t let her wallow. Kate needs money for fertility treatments, and Rene’s computer-guru husband, Sam, has a job opportunity in mind.

“Back to my moneymaking idea for you. Sam has a potential job for you at Teen Path HOME.”

“Teen Path HOME? Isn’t that a center for homeless youth?”

Murder Likes It Hot cements its urban authenticity by weaving social issues seamlessly into the plot. “Seattle-area homelessness and poverty” concern Kate and her friends Rene and Sam. Sam so much so that he goes on the board of directors of Teen Path HOME. “The center’s director, Gabriel Cousins, was Sam’s roommate in college.”

Rene leaned forward, attention now completely focused on me. “Gabriel wants to add some stress management classes, and Sam thinks yoga would be perfect. He sort of volunteered you to teach a trial series.”

When Kate visits for the first time, she agrees with Sam—it is a special place. “The sign above the door read, Teen Path HOME. Creating a path out of Homelessness via Outreach, Mentoring, and Education.” Kate hopes to be a part of their mission. Gabriel is encouraging, albeit realistic. Kate tells him how impressed she is by the drawings on the walls.

“I moved back toward Another Life, as if drawn by magnet. This one with two rooms is amazing.”

“She’s incredible.” I pointed at the girl depicted in the drawing. “Is that the artist?”

“Yes, that’s Rainbow. She includes herself in a lot of her work. I suspect she’s re-creating scenes from her life, but that’s an assumption. She hasn’t said either way.”

Kate likes Gabriel—when she tells him she’s “just a yoga teacher,” he corrects her, saying at the very least her classes will give the teens “a few minutes of peace.” It’s anything but peaceful a few minutes later when Gabriel’s pet rats, Lonnie and Ed, escape. Kate hates rats. Why does Gabriel have them as pets? He tells her they’re a lot like homeless teens. They have a terrible reputation, even though they’re “resourceful survivors.” No wonder they run away from most humans.

“So rats learn how to become invisible, exactly like homeless teens do. They have to, if they want to survive. And they’re amazingly affectionate. Once they trust you, they’re your friends for life.”

Tragically, Gabriel is murdered at the center a few weeks after Kate starts teaching. Kate’s positive that Rainbow, the teen tagged as Gabriel’s murderer is not his killer. Kate is mesmerized by Rainbow’s art and what she can glean of her backstory. She wants to prove her innocence, so Kate and her trusty German shepherd start investigating.

Kate has a touch of Holden Caulfield—she wants to save everyone. In the end, she can only rescue Rainbow and Gabriel’s pair of rats. In Weber’s hands though, that’s enough. We are reminded of Robert Kennedy’s vision of human history: “Few will have the greatness to bend history itself; but each of us can work to change a small portion of events.” Homelessness and poverty are seemingly intractable problems, but Murder Likes It Hot provides a more hopeful perspective through the lens of an enjoyable mystery. Limber up with some cat-cow stretches and then settle down with a Seattle-quality caffeinated beverage while you check out Tracy Weber’s latest Downward Dog mystery.