Book Review: Murder in a Scottish Garden by Traci Hall

May 27, 2021
In the second Scottish Shire Mystery from Traci Hall, single mom and sweater shop owner Paislee Shaw must root out a garden variety killer... 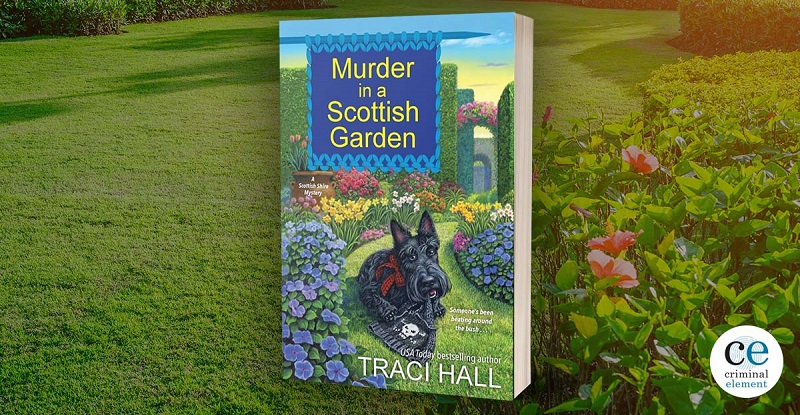 Meet Paislee Shaw, single parent to her ten-year-old son Brody and the proprietor of Cashmere Crush, a specialty sweater and yarn shop in Nairn, Scotland. Nairn, known as “the Brighton of the North,” is a seaside town in the Loch Ness region of Scotland. Paislee inherited her interest in knitting from her dear departed grandmother, someone so important to her that she still calls upon Gran for psychic advice and guidance.

Paislee is a devoted mum who works hard to keep the roof of her son’s head. In addition to Brody, Paislee’s eccentric, formerly estranged, grandfather and Wallace, her black Scottish terrier, make up her household. She has a loyal circle of friends, “devoted local crafters,” who come to her shop each week for a Knit and Sip gathering. Paislee rents her shop from Shawn Marcus, as do the other shopkeepers on her block. Everyone is upset when their landlord serves them with an eviction notice. Piling on the distress, Shawn disappears, making it impossible for Paislee and the other tenants to reason with him.  Well, if the Mountain won’t come to Mohammed, Mohammed will go to the Mountain—Paislee decides to beard Shawn at his family home, the Leery Estate. She feels quite desperate.

Her shop, Cashmere Crush, was Paislee’s sole source of income to keep food in the Shaw family’s mouths. She had five days to appeal to his compassion and stop him from going through with the sale. Paislee was tempted to petition Lady Shannon Leery herself if Shawn kept playing games.

Fortuitously, she is scheduled to chaperon Brody’s class on a field trip to the gardens at the Leery Estate. Paislee is confident that she can make Marcus see reason but that’s not how the day turns out. Paislee is horrified to see a man falling out of the hedges after being shot. No, the dead man isn’t Shawn Marcus but rather Lady Leery’s nephew, Charles Thomson. The police interrogate Paislee, and she never does track down Marcus.

Paislee and the other tenants are very perturbed about their pending eviction. Somehow she needs to get back to the Leery Estate. Paislee’s best friend Lydia, a talented real estate agent, invites her to be her platonic plus-one at a grand dinner at the Leery Estate. It’s a corporate celebration of a very successful real estate season. What a contrast to Paislee the chaperon, shepherding school kids. Lydia makes sure Paislee has dressed appropriately and primed for the festivities. But of course, talk of the murder is inevitable. After pouring each of them a glass of white wine, Lydia says, “Tell me everything while I do your makeup.” Detective Inspector Zeffer, the new guy in law enforcement in Nairn, comes in for some criticism from the locals.

“That was the topic of conversation at the office as well.” Lydia combed out Paislee’s hair. “One of my clients swears he’s ready tae haul Inspector Shinner oot of retirement tae show the new lad how tae run Nairn.”

Paislee groaned, caught by a pang of sympathy for Zeffer that she wouldn’t admit to anybody. “I’d hoped he would’ve caught the killer by now.” No phone calls, no texts. “But I did find out that Charles was a scam artist when he lived in London. Maybe he ripped off the wrong person? This was revenge?”

Paislee soaks up impressions of the Leery Estate, memorizing the discrepancies between the impression the Leery family strives to make and the reality of an estate suffering financially. She goes behind the scenes to poke around and ask questions of the servants. Paislee has much to consider when she goes over the evening’s events in her mind.

What should I do, Gran? I feel caught between a rock and a hard place.

The front door opened. Paislee wasn’t the least surprised, given how her day had been, to see the broad shoulders and russet hair of Detective Inspector Zeffer.

The detective strode toward her, unsmiling. “How was the party?”

Paislee knew that it galled the DI to even ask. “Interesting. The meal was a million courses long, and they use real crystal and porcelain china.”

“You know I dinnae care aboot the fish course, right?”

She held his gaze. He wanted information. So did she. “Aye. I noticed all the guns in the cabinet were gone.”

He half-smiled at that. “They’re at the station.”

“The butler told me. Malcolm.” Paislee picked up her yarn and needles. “He seemed certain that none of them were the rifle that shot Charles.”

Zeffer stroked his clean-shaven chin. “Perhaps. In any event, I willnae release them until the case is closed.”

It seems Zeffer realizes he won’t be closing the case without Paislee Shaw’s help. As a mother of a young boy, Paislee understands Lady Leery’s sorrow over Shawn, a rather troubled gentleman. Paislee uses empathy, doggedness, and the power of observation to solve a Murder in a Scottish Garden. She’s a very likable and relatable heroine—making good decisions with the help of other-worldly advice from her Gran. Traci Hall keeps it real in the second Scottish Shire Mystery—and the gorgeous seaside setting and delectable descriptions of Scottish treats add to the enjoyment.