October 7, 2021
In the latest Wrexford & Sloane Mystery from Andrea Penrose, the wedding of the Earl of Wrexford and Lady Charlotte Sloane is not-to-be-missed, but the murder of a brilliant London scientist threatens their plans—and their lives… 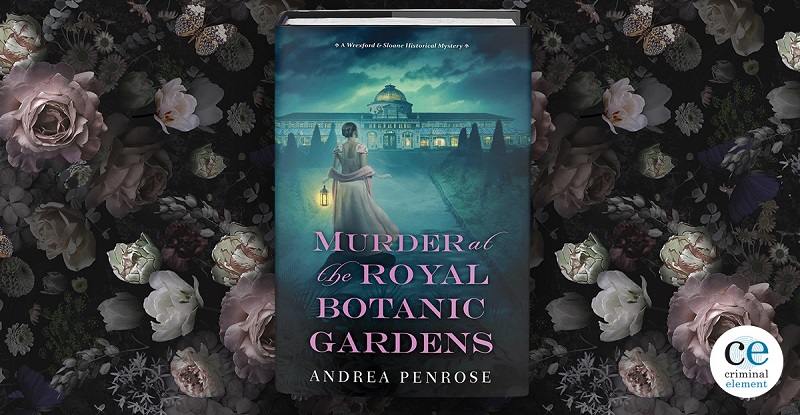 Lady Charlotte Sloane’s upcoming marriage to the Earl of Wrexford is the social event of the season. Charlotte is feeling some pre-marital jitters, not because she isn’t in love with her husband-to-be, but instead because becoming a countess is a sea-change for her and her two wards, fondly referred to as the Weasels. Will she be able to continue creating secret cartoons under the pseudonym A.J. Quill? Though few people know, Charlotte is the “famed satirical artist” whose every sketch skewers the foibles of the Ton.

The engaged couple decide to attend a symposium at the Royal Botanic Gardens. Early in the evening, the secretary of the Royal Society, Lord Bethany, approaches Wrexford discreetly.

“Forgive the interruption, sir.” The look of alarm in his eyes belied his smile as he drew Wrexford aside. “But might I ask you to come with me to the conservatory. There’s been an . . . unfortunate mishap.”

That’s one way of describing the discovery of Mr. Becton’s corpse among the exotic specimens. Wrexford has an involuntary sense of someone walking over his grave as he contemplates the possibility that Becton did not die a natural death.

Though this death did not involve him or those he held dear, he knew all too well how murder—if this, in fact, proved to be one—had a way of reaching out and entrapping innocent victims within its tentacles.

To Lord Bethany’s dismay, it’s a murder, not a mishap. Becton’s close friend, Dr. Hosack, examines the scene and realizes there is proof that puts paid to the notion that Becton had a wonky heart.

A bad heart be damned.

Unless he was much mistaken, the tiny telltale flecks of white powder indicated that it wasn’t the Grim Reapers’s blade that had cut his friend’s life short.

The mortal blow had come from some earthly hand.

Wrexford and Charlotte wonder why anyone would kill a scientist but they are told to follow the money. Mr. Becton was deeply involved in research that had the potential to result in a new medicine. One of Becton’s colleagues shared that Becton was scared that someone was trying to steal his research. The victim also worried about the safety of others and kept his momentous medical discovery to himself so as not to endanger others.

Few of their compatriots fully recognize Lady Charlotte as Wrexford’s counterpart, adhering to the custom of protecting what they perceive to be the weaker sex. But the earl considers her his partner in all ways, including criminal investigations where her differing perspectives inevitably prove helpful as they hone their collaborative detecting skills. Her wards, the Weasels, navigate murder in their own inimitable style: their skills are needed and they are smart enough to anticipate how they might be most helpful. In fact, Hawk’s revelations (he followed Lady Charlotte and Wexford to the Botanical Gardens) sets the stage for the investigation. Hawk tells the couple that someone threw a glass at him—he rejects Wexford’s factotum’s statement that he did something wrong, although Hawk did venture into a side gallery instead of staying put.

The boy made a face. “It’s him who should have his bottom birched. He damaged a valuable Asplenium ruprechtii from the wilds of the Orient.”

Wrexford felt his muscles tighten. A quick glance showed Charlotte had fisted her hands in her skirts.

“A gentleman threw a glass into the plantings, sweeting?” she asked.

“Can you show me exactly where this was?” the earl demanded.

“I ain’t—I’m not—telling a faradiddle, sir,” answered Hawk, a note of hurt shading his tone.

“I’m not suggesting you are, lad.”

The boy straightened from his slouch, his eyes instantly coming alert. “Are we investigating another murder?”

“We,” replied Wrexford, “are doing no such thing.”

I wouldn’t take a bet that the two Weasels won’t be involved in solving the latest mystery to be dropped at the feet of Lady Charlotte and Wrexford. The complicated plot sees the return of Charlotte’s nemesis, Justinian DeVere. Charlotte is sure that somehow DeVere is involved in the scientist’s murder. There are many red herrings, however. Wrexford, in a rather human way, is suspicious of visiting an Italian botanist, someone Charlotte knew and liked when she was married to her first husband.

Andrea Penrose is skillful at incorporating the scientific discoveries of the day into her plots.  In her last Regency mystery, Murder at Queen’s Landing, Charlotte and Wrexford are tantalized by a machine that purported “to more accurately calculate math function.”  Botany is the focus of Murder at the Royal Botanic Gardens. Penrose shared, “While my “miracle” plant in this book—and the nefarious plot that revolves around it—is entirely fictional, it was inspired by the ‘discovery’ (they learned of it from the indigenous peoples of the region) of cinchona bark by the early Spanish explorers. Cinchona—often called Jesuit’s bar—contains quinine, and was the only treatment for malaria at the time . . .”

A plot that concerns machinations around the development and profit of a potentially life-saving drug seems almost modern—but perhaps Lady Charlotte’s favorite saying, “Fortune favors the bold,” is a timeless prescription for success. The investigators are pushed to their limits as they attempt to unravel the complex story of why a respected scholar was killed in a conservatory. Latin lovers will rejoice because, as always, the latest Wrexford and Sloane mystery is liberally sprinkled with aphorisms like “Fortes fortuna juvat.”

For readers who are not ready to say goodbye to the Wrexford and Sloane mysteries, some good news from the author—she’s signed a new contract to continue the adventures of Wrexford and Charlotte.