Book Review: Murder at the PTA by Lee Hollis 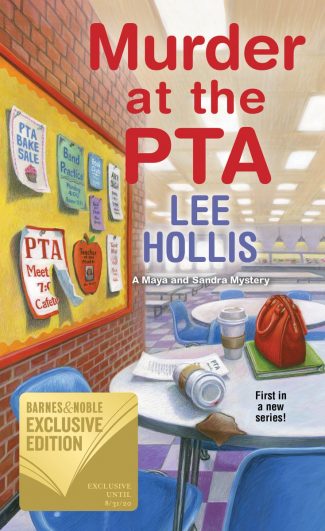 Murder at the PTA

A Maya and Sandra Mystery

Rick Copp is a veteran television writer/producer and mystery scribe. Holly Simason is an award-winning food and cocktails columnist. Together, this brother/sister duo are known as “Lee Hollis,” beloved author of the 11-book (and growing) Hayley Powell cozy series. Their newest collaboration, Murder at the PTA, is the first entry in the Maya and Sandra mysteries, which is published by Kensington and will be carried exclusively in-print at Barnes & Noble locations for the next year.

Sandra Wallage is the wife of a US senator. As such, she understands the importance of political considerations such as optics. Still, the thought of public speaking gives her agita, though her new role as PTA president of Maine’s South Portland High School, where her two teenage sons are enrolled, leaves her little choice in the matter. The show—err, the speech—must go on, and she gamely jumps into her first major address of the fall semester before a flurry of cell phone activity reverberates throughout the auditorium with breaking news. The headline: “New PTA President’s Senator Husband Uses Tax-payer Money to Hush Up Blockbuster Sex Scandal.”

This is merely the latest allegation to pop up on an anonymously written web site called Dirty Laundry, which has been spreading salacious gossip about the families and faculty of SoPo High. And while Sandra knows better than to give the rumors any credence by responding to them, her public composure belies private misgivings; after all, her husband, Stephen, has been unfaithful before. Fortuitously (or not), another shocking story quickly tops the news: the hanging death of the site’s web master/mistress, apparently triggered by a guilty conscience. The authorities quickly classify it a suicide and close the case, but Sandra—who discovered the body along with former classmate and current PI Maya Kendrick—is led to believe otherwise. After all, the motives for murder are many.

Ex-cop Maya—also the mother of Sandra’s youngest son’s new girlfriend—is soon hired by the victim’s sister to investigate. It’s a boon, given that she’s a recently single parent with both a business and a family to support; it’s also a tall order, considering her partner, Frances, is eight months pregnant and largely indisposed, and will soon be going on maternity leave. But if she doesn’t get results, and soon, she’ll lose the job and the sizable payday that comes with it. Despite her own reservations (and heated objections from Frances), Maya brings an enthusiastic Sandra into the fold. Though unconventional, Sandra’s role as PTA president coupled with her carefully constructed social savvy grants her unique access to the SoPo community. There’s no shortage of suspects, and the nature of the crime means the two are soon eyeing their friends, neighbors, and associates as potential perpetrators. Awkward!

The narrative alternates perspectives between Sandra and Maya, ensuring that readers are privy to the characters’ private lives as well as their professional ones. In addition to providing solid ground for the duo’s seemingly unlikely partnering, this also illuminates each woman’s quest for validation on her own merits. Consequently, the domestic interludes read like foundation rather than filler. And while the book has all the charms of a cozy (amateur sleuth, small town, etc.), it doesn’t shay away from weightier subject matter; indeed, corruption, drug use, gender bias, infidelity, politics, and sexuality all get their due. It’s these dark undertones that ground the work in the complex realities of modern life.

The authors known as Lee Hollis have really hit on something here. While the premise—a private eye and a senator’s wife teaming up to solve crimes—may sound unlikely, the depth of development renders it both credible and compelling. Sandra and Maya are protagonists worth rooting for, and together prove that there’s true strength in solidarity. Timely, topical, and thoroughly entertaining … Murder at the PTA is at the head of its class!