Book Review: Murder at the Palace by Margaret Dumas 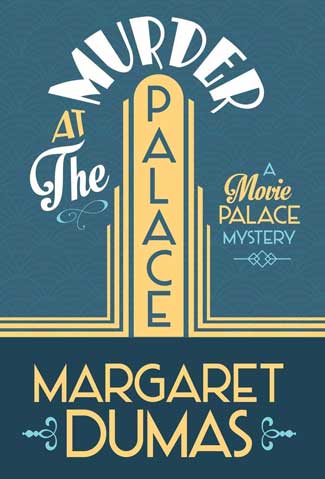 Murder at the Palace

Murder at the Palace by Margaret Dumas is the first book in the new Movie Palace Mystery series.

Old movie buffs, fans of San Francisco, and lovers of well-done mystery series debuts will shout huzzah and encore at author Margaret Dumas. Dumas’s Murder at the Palace is witty and well-crafted as well as a treasure trove of information on classic films.

Nora Paige is at the center of a social-media maelstrom. She is being stalked by the press and the paps because her movie-star “husband’s madcap love affair with his gorgeous co-star” is an open secret. Hollywood is the last place she wants to be. Her husband, Ted Bishop, has “considerable fame and power,” but Nora has a few friends who have her back. Robbie knows Nora desperately needs a place to go and something to do.

She’d offered me somewhere to go: San Francisco. More specifically, the cozy guest house behind her Presidio Heights vacation home. And she’d given me something to do: run the classic movie theater that she co-owned just a few blocks away.

“Running it is really an overstatement,” Robbie had explained to me back in my Beverly Hills kitchen the week before. “It practically runs itself. I mean the staff is amazing. And it’s turning a nice little profit. So it’s really just something fun for you to do—no pressure—until you figure out your next step.”

Is Nora qualified to run a classic movie theater? Tia, Robbie’s daughter, points out that Nora is “the only person on the planet who knows as much about old movies as my mom,” otherwise known as classic films, the nomenclature Robbie prefers. There’s an opening at the Palace because Kate, the long-time manager, died recently in an accident.

Nora heads to the Palace as soon as she arrives in the Bay area, where Albert Lockhart, an elderly employee, takes her under his wing and gives her a tour of the facilities. Nora ruefully thinks, “Robbie hadn’t mentioned that the staff was as old as the movies.” It’s patently clear that Kate was revered by all. Kate tells Albert she “can’t imagine how difficult this must be for you.”

Albert nodded. “For all of us,” he said, pocketing his keys. “We are something of a family here.” He peered at me. “With all the blind loyalties and simmering jealousies that implies.”

That was a little daunting. Robbie had talked me into this with the promises of seclusion and distraction. She hadn’t described the place as a hotbed of suppressed emotions. I had plenty of emotions of my own to suppress.

When Nora opens the doors of the Palace, she steps into her past and her future. She can’t resist the “scent of magic,” the irresistible aroma of “ninety-odd years’ worth of popcorn, spilled sodas, dust, sweat, and dreams.” Nora adores the old black-and-white movies she grew up on. Their plots inform her everyday thinking.

I loved the strong, struggling characters from the golden age of Women’s Pictures—the Joan Crawford and Bette Davis and Barbara Stanwyck characters who didn’t let anything from murderous offspring to brain tumors get in their way. I needed to channel those women now as I started my life over.

Nora meets the motley cast of characters that are the lifeblood of the Palace. They’re loyal to Kate’s memory and mission, crusty and intriguing. Their opinions and knowledge of classic movies run deep—and they’re unafraid to share them. To prove to herself that she can be as strong as Joan and Bette and Barbara and show her new team that she’s willing to pitch in wherever she’s needed, Nora volunteers to go down to the basement to haul up ice from the backup ice machine (after the one in the lobby goes on the fritz). Did someone say something about not letting anything or anyone “murderous” get in the way? Traipsing into the bowels of the old theater, Nora gets a text from her no-good husband. He says he needs her. Sigh … he went to the trouble of tracking down her new cell number because he can’t find the keys to the Bentley. It only needed that. Nora’s days of being the “stupidest woman on the planet” are over.

I flung back the lid to the ice machine and screamed. Not because of Ted. Because there was a dead body in the ice.

The Palace is suddenly full of surprises. A dead body—a suspicion that Kate’s “accidental” death wasn’t an accident—and a unique movie theater that needs a manager to program and plan the repertory schedule. There’s even Trixie, a ghost from the early days of the Palace that only Nora can see and talk to. Nora has her hands full, and she loves it. Robbie asks her how she’s doing: “Settling in? Feeling better?”

I was, actually. Both settling in and feeling better. Possibly because I had the many puzzles of the Palace to solve, and possibly because, in light of what I’d learned about the existence of ghosts in general and Trixie in particular, the entire world had suddenly taken on new and fascinating dimensions.

The silver-screen-lining of Murder at the Palace is the incredible depth of information about old movies. Have a notepad—electronic or dead tree—handy while you read because you’ll have a huge list of must-see movies when you finish the book. There’s even a link to the movie blog Movies My Friends Should Watch.

Lights, camera, action! “Welcome to the Palace movie theater! Now Showing: Philandering husbands, ghostly sidekicks, and a murder or two.” Can’t wait to see what’s next in store at the Palace Theater.