November 4, 2021
In the first entry in Colleen Cambridge's charming and inventive new historical series, Phyllida Bright, fictional housekeeper for none other than Agatha Christie, investigates a dead body found during a party at the home of Agatha and her husband Max Mallowan. 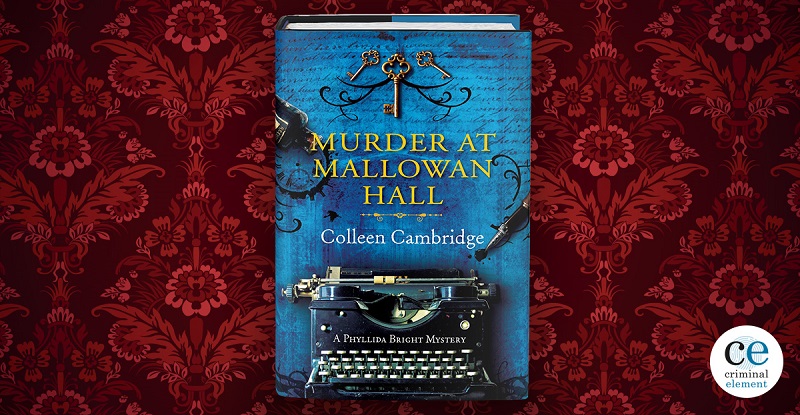 A housekeeper discovers a dead body in the library early one morning, rather a clichéd start to a mystery. But Phyllida Bright is no ordinary housekeeper. She is the head of household at her old friend’s stately country manor: her friend is Mrs. Max Mallowan aka Agatha Christie, the famous mystery novelist.

It’s the 1930s. A housekeeper is an essential cog in the smooth running of a grand English country house. Phyllida Bright is dependable, sensible, and terrifyingly capable. What about prudent? The butler, Mr. Dobble, privately wishes her flaming locks were obscured by a cap but Phyllida sees no need to cover her strawberry gold hair or tone down her all-seeing, inquisitive ways. Perhaps her long-standing friendship with Agatha Christie gives her more flexibility and independence than is unusual. The two women met during the Great War (Phyllida is a former army nurse), so it’s not surprising Phyllida doesn’t scream at the sight of a dead body.

As if I don’t have enough to manage today, she thought as her battlefield nurse’s training kicked in and she knelt to ascertain whether the man was, in fact, actually dead.

He was quite dead—not to mention being significantly bloodied due to the fountain pen protruding from the side of his neck. The stains in the library’s rug would require an extra two hours of work, and then time to dry, before it could be replaced. And she didn’t even want to contemplate how long it would take to get the blood splatters off the books and wallpaper.

Nonetheless, Phyllida closed her eyes and wished a sincere Godspeed to the poor man’s soul—then added a note of gratitude that she’d been the one to discover Mr. Waring instead of Ginny, the high-pitched parlourmaid who saw to the library each morning. That would have been just the icing on the cake.

Mr. Waring, a journalist, had arrived unexpectedly the previous night. He was given a bed for the night but he was not asked to join the Mallowans’ weekend house party. Phyllida calls the local constabulary as soon as she ascertains that Waring is dead but they aren’t very helpful.

“Yer sayin’ there’s a dead body in the library at Agatha Christie’s house?

“I am in fact saying precisely that, Constable. And I expect you’ll attend to this posthaste. Mr. and Mrs. Mallowan have a houseful of guests.” She wasn’t certain he heard her over his guffaws of laughter.

“It’s a good jest, it is, ma’am,” he managed to say between heavy chuckles. “A dead body there at—”

What the police investigators soon ruefully realize is that Phyllida’s formidable skillset equips her to be an excellent observer. She determines that Waring arrived at Mallowan Hall under false pretenses. Readers may be surprised that Phyllida, not Agatha Christie, is the in-house investigator, but Christie is a hard-working author who doesn’t particularly want to be disturbed. Admittedly, over private cups of tea, she and Phyllida discuss the progress of the case. Murder at Mallowan Hall is rather meta, in that all the household servants have an inkling of the rules of evidence, which proves to be very useful. Everyone is proud to work for the undisputed Queen of Crime. It’s amusing that Phyllida is inspired not by Agatha but by the “little grey cells” of her beau ideal, fictional Belgian detective M. Hercule Poirot.

Like Agatha, Phyllida has a past and secrets that she is not prepared to divulge. Perhaps during a future book, the truth behind the break-up of Agatha’s first marriage will emerge (since Phyllida is privy to that secret). During the investigation, it becomes evident that the housekeeper is skilled at dissimulation. Consider what she’s juggling on a day-to-day basis—demanding guests, not all of whom have personal valets and maids, inquiring journalists, and nervous servants. Phyllida must make time to investigate while making sure the wheels don’t come off the bus: baths must be drawn and meals served on time. After a housemaid is murdered, Phyllida doubles down on finding a connection between the housemaid’s former posts, the guests at the house party, and the dead journalist.

The accuracy of the upstairs and downstairs relationship and the turf battles between the upper servants take me back to Upstairs, Downstairs. Mallowan Hall is more modern than some country estates because the stables are empty of horses with cars taking their place. The new chauffeur, Joshua Bradford, initially irks Phyllida—she finds him “uncivil”—but Mr. Dobble (who is also daunted by a man who is a “law unto himself”) shares that the independent chauffeur is an old friend of Mr. Max’s brother and is very skilled with engines. Bradford, surly outlook notwithstanding, becomes an ally and friend to Phyllida. As does the handsome physician, Dr. Bhatt. No doubt Bradford and Bhatt will be continuing characters in any upcoming Phyllida Bright mysteries.

The premise of a crime-solving housekeeper to the one and only Agatha Christie is full of promise and portent.  It’s such a pleasure when the first book in a new mystery series is well-crafted and I look forward to reading more of Phyllida Bright’s adventures in detection.