July 1, 2020
In the second Stella & Lyndy Mystery, Kentuckian Stella Kendrick cautiously navigates the strict demands of British high society. But when petty scandals lead to bloody murder, her outspoken nature could be all that keeps her alive... 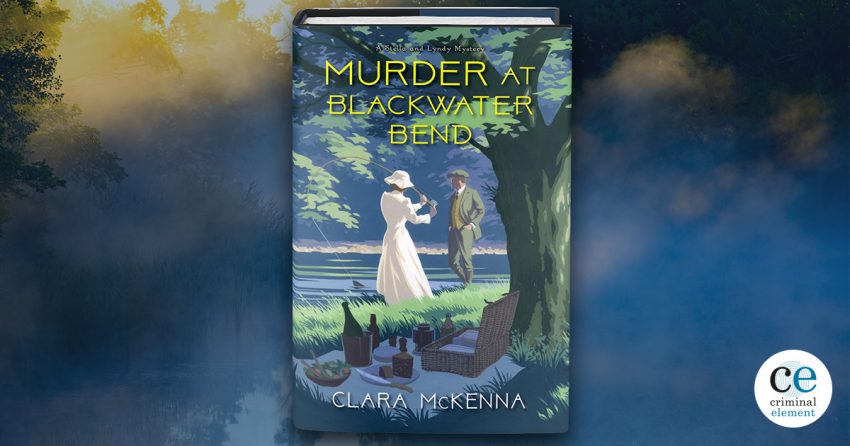 Murder at Blackwater Bend is Clara McKenna’s second Stella and Lyndy Mystery, in which the young couple is now formally engaged although a wedding date has yet to be set. Kentucky heiress Stella Kendrick has endured a crash course in aristocratic mores from her fiancé’s mother. Lady Atherly is a stiff, snobbish woman who resents her family’s need for an American bailout. She dislikes Stella’s refreshing openness and has nothing for disdain for Lord Atherly’s happiness with the betrothal.

Besides, what did happiness have to do with it? This was about tradition, decorum, survival. And everything rested precariously on the shoulders of a young, ill-bred American girl. How could that possibly make her happy?

How could the earl be unhappy? He has everything he wants, particularly enough money to continue funding archeological endeavors, his passion.  If Lady Atherly were to ask her son how he felt about his engagement, Lyndy would say he was as pleased as punch. Kendrick’s money will rescue Morrington Hall, particularly the racing stables which will be elevated to the standard of his grandfather’s day.

Fortuitously, Stella and Lyndy are both horse-mad, something they’ve had in common since they first met. They also have a flair for solving mysteries. Lastly, the more time they spend together, the more vital Stella becomes to Lyndy’s personal happiness.

How Lyndy loved that smile. He’d basked in it for the past two months, getting to know the woman who wore it. He’d never done anything as frustrating, challenging, or thrilling; much like the woman herself.

Everywhere Stella goes, she’s evaluated and judged, obviously because one day she’ll be the mistress of Morrington Hall but also because she sticks out. She’s a wealthy, independent American, who drives her father’s Daimler. But perhaps most shocking to stratified English society, she’s friendly to everyone. There are events that Stella and Lyndy are expected to attend, like the New Forest Pony Challenge, where all the local landowners enter their ponies into competition. Cecil Barlow, a dashing exotic plant hunter who divides his time between England and South America, acts as the master of ceremonies.

“Bloody chance of that happening!” a shout rang out above the applause. Abruptly murmurs and gasps replaced the applause and cheers. “Seems more likely me pony will sprout a horn than win as it should.”

It’s George Parley, a wealthy landowner with excellent ponies, that shouts at the crowd. He’s not subtle: he flat out accuses the judges of fixing the results. The recipient of said judge-fixing is not pleased.

“I say, Lyndhurst, shall we proceed?” Fairbrother, nonplussed by George Parley’s accusation, pushed open the gate in the fence and entered the ring. “I have no doubt the judges know a good pony when they see one.”

Lyndy didn’t doubt it either. Pity they probably weren’t going to let the best one win.

Nor did they—the 1905 Cup ends up going to Lord Fairbrother, for the seventh year in a row. Stella is not a fan of Lord Fairbrother, finding his attitude and swagger quite unappealing. Additionally, he’s married to the oh-so-perfect Lady Phillipa, who was once touted as Lyndy’s future viscountess. The gathering degenerates into a brawl, erupting with accusations. Lyndy storms out, thoroughly fed up. Stella follows him outside, and they share her umbrella. Before Stella visits the stables to see her favorite horse Tully, Lyndy crushes her in an embrace and invites her to come fly-fishing with him.

“I’d like to teach you.” Of course, she’d agreed, the strength of his arms still wrapped around her. She never imagined she’d enjoy it so much.

While fishing, beginner’s luck is with Stella…or so it seems. When Stella tries to free her feathered fly, she falls into the water awkwardly when her boot becomes wedged under something beneath the water. That something turns out the body of Lord Fairbrother. Perhaps he drowned by accident? Stella, Lyndy, and Aunt Rachel are soon joined by the local police, Constable Waterman and Inspector Brown. Stella is shaken by Lord Fairbrother’s death and her fiance’s instinctive reaction is to get her warm and supply her with a cup of tea. But Stella is made of sterner stuff.

Lyndy meant well, but she hadn’t asked any of her questions yet. She twisted in his embrace to face the policemen again.

“But what happened to him, Inspector?” She’d avoided asking but couldn’t stand it any longer. She had to know. “Did he drown, or was he murdered.”

Not unexpectedly, Inspector Brown hedges his bets but when Lyndy pushes, Brown admits that he expects foul play. In Murder at Morrington Hall, the police found it disconcerting that Lyndy and Stella insisted on being part of the investigation of the local vicar’s murder, but Brown has no misgivings this time.

Besides, Brown had thrown away any semblance of standard protocol when these two aided him with his last murder case. They’d caught the killer, hadn’t they? What was the harm in involving them again?

You won’t get any complaints from Stella. She’s “supposed” to be planning an elaborate engagement dinner, a test of her ability to mingle with the local hoi polloi. Lyndy reminds her of it when on the day of the party, she insists on tracking down Inspector Brown.

“Why, Miss Kendrick,” Lyndy teased, “some would accuse you of being lax in your duties, willing to do anything, even delve into the sordid details of the murder, rather than host a dinner party.”

Laughing, Stella agrees, “they would be right.” Stella and Lyndy come from different backgrounds but together they’re creating a life that combines the best of the old and new worlds. I look forward to their next adventure, hopefully after a splendiferous wedding.