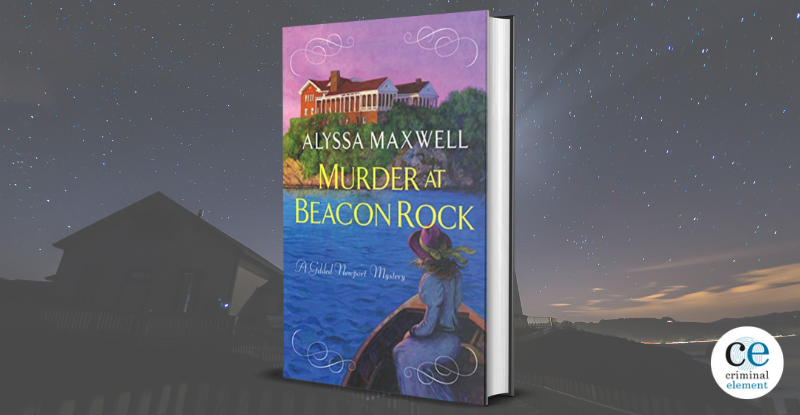 Mysteries featuring historical figures shed light on the times in which they lived. It’s a bonus when the setting is a gorgeous destination. Welcome to Newport, Rhode Island, July 1900. Edwin and Elizabeth Morgan are summering at their Grecian-inspired summer cottage, Beacon Rock, a stunningly beautiful mansion.

Emmaline (Emma) Cross and her fiancé, Derrick Andrews, “a man born to wealth and pedigree,” are invited to dinner. The Morgans are entertaining a select group of very wealthy, competitive sailors. The guests, led by New York Yacht Club Commodore John Pierpoint Morgan (Edwin’s cousin), and Lucy Carnegie (the first woman allowed to join the NYYC and Thomas Carnegie’s widow), are intensely focused on the next year’s 1901 America’s Cup Race. Derrick owns a yacht but he’s not a captain of industry willing to spend any amount of money to hire great crews and harness the latest technology. “If you have to ask, you can’t afford it.” This quip is attributed to none other than Commodore J.P. Morgan.

Reporter Emma Cross, a “lesser Vanderbilt,” has lived in Newport her whole life. As a poor relation, she is well acquainted with the exclusive Four Hundred, leaders of New York society in the Gilded Age. She is uncertain about her married future, with one foot in their world, via her fiancé, and one foot in the world of investigative journalism and crime solving.  Elizabeth Morgan ushers the ladies to the drawing room, leaving the gentleman to brandy and cigars. The conversation is of parties, gowns, and the summer Season: Emma finds it “not only inconsequential, but disheartening,” so she slips outside.

She stops at the stairs leading down to the harbor when Lucy Carnegie calls out. Emma murmurs she’s admiring the boats but Lucy says, “Fiddlesticks! You were as bored in there as I was.” Emma hears a slap-thumping sound from below, like that of some large ocean debris caught against the pilings of a pier. They see the body of a woman in the water. Lucy jumps in and grabs the corpse while Emma sets the boathouse bell pealing.

Amid the rescuers, Emma thinks of the drowned woman? Did she fall off the Newport ferry or is she a suicide or did someone drown her?

She was young—very young. Even mottled by water and death, her face was smooth and softly formed, that of someone who had been a mere child not long ago.

Suddenly overcome by the tragedy of one so young meeting her end, I fell to a crouch beside her. “Who are you?” I whispered, staring into those empty eyes.

Emma explores the pockets of the woman’s traveling suit, the tailoring of which suggests good quality—the kind only the well-off could afford. The ladies disapprove of her searching the dead woman’s clothes but Emma says, “There is no dignity in dying an anonymous death.” She discovers a head shot of a young, beautiful woman with a confident and direct gaze. There’s a short inscription: “To Wally darling, from L.” The photographer’s stamp on the back is Edward Gorman of Great Neck, Long Island. The police arrive, and Emma is glad to see her friend Detective Jesse Whyte. He doesn’t treat her like a nosy reporter, but his partner, Detective Myers, notes that “Miss Cross seems to always be on hand in situations such as these, don’t you, Miss Cross?”

The dead woman is Lillian Fahey, eighteen years old. Derrick and Emma talk to the police after the autopsy. Based on questionable reasoning, the powers-that-be proclaim that the young woman must have jumped to her death when a love affair went awry. Emma suspects they don’t want to inconvenience Edwin and Elizabeth Morgan since the body was found floating in their harbor, but she’s not buying it. She sees herself in Lillian, a capable young woman. This theory is strengthened after she talks to Eben Fahey and asks him his profession.

“I am engineer, specializing in aerodynamics as it relates to the speed of mechanical objects.”

“I see. And you said your daughter helped with your work?”

“She is—was—a brilliant mathematician. She often helped me with my formulae.”

“And how do you apply your formulas, if I might ask?”

“These days, I work mostly with watercraft. My services are in high demand for racing yachts and I often collaborate with Nat Herreshoff.”

My gaze darted to Jesse. He had suddenly gone as pale as I felt. Nathanael Herreshoff designed many of the racing yachts belonging to New York Yacht Club members, including the Columbia.

Derrick and Emma sail in Derrick’s yacht, the Polaris, to Long Island and travel to Great Neck. Eben Fahey’s housekeeper shows them his study where “one box sat open on the floor, its cover tossed aside, and the contents strewn over the oak boards.” They find photographer Edward Gorman dead in his studio. Ferreting through his paperwork, Lillian learns that Walter Raleigh—darling Wally—was photographed right after Lillian. A sailor who accosted Lillian is found murdered. Given Eben and tangentially Lillian’s work collaborating with the racing elite to maximize speed, suicide seems a non-starter. Emma’s thoughts echo Agatha Christie: “Any coincidence is worth noticing. You can throw it away later if it is only a coincidence.”

There are too many coincidences—Emma, Derrick and Jesse sift through myriad suspects to solve Lillian’s murder.

Alyssa Maxwell keeps the reader guessing to the very end.