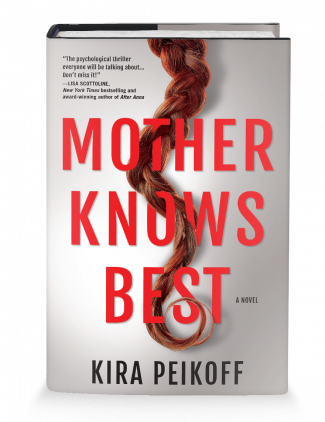 In Kira Peikoff’s new psychological thriller, Mother Knows Best a scientist illegally edits human DNA to help a mother conceive a healthy baby. But their actions carry steep consequences and lead to a deadly secret that haunts a family across the generations.

This medical thriller had me compulsively turning the pages to find out what happens next! Kira Peikoff’s writing just slaloms you along, taking a multitude of twists as you race to the end of this thought-provoking yet surprisingly easy to read novel.

I say “surprisingly” because Mother Knows Best deals with some pretty heavy subjects, wrestling with the ethics of innovations in reproductive technology while never shirking away from the science at the heart of the issue. But perhaps I shouldn’t be so astonished given Ms. Peikoff’s extensive background in science writing. It was certainly a pleasure to have complicated scientific processes broken down into easily accessible analogies, as here, where the experimental procedure to remedy a woman’s mitochondrial mutation from being passed down to her offspring is explained:

If the nucleus is like a big, important mansion, housing almost all the cell’s DNA, then the mitochondrial DNA is like a little gas station in the backyard. The station may be tiny, but its energy powers the entire lot. In some cases, however, the gas station is prone to catching on fire, which threatens to wipe out the whole property.

Nash’s idea is to rescue the mansion from the burning property by airlifting it onto somebody else’s safe property whose own mansion has been removed. All that remains there is its working gas station, until the new mansion takes up residence. The resulting combination will be set for life—not a fire in sight.

Nash is Dr. Robert Nash, the fertility specialist whose research has had to fly under the radar given the illegal nature of what he’s trying to do. The United States has banned genetic editing of human reproductive cells, so his idea of combining the DNA of two mothers—despite having shown great results in rats—faces little chance of ever entering the clinical trial phase for humans. However, his brilliant but unstable postgrad researcher Jillian Hendricks, is certain they can find a way.

Enter Claire and Ethan Abrams, a couple desperate to have another child. Their firstborn, Colton, died of an inherited genetic mutation of his mitochondria at age 8. Ethan wants to try again and pray for a child who will be as asymptomatic as Claire, the carrier of the mutation. Claire, however, doesn’t want to put herself through the heartbreak of losing a beloved child all over again. When she hears about Nash’s work, she leaps at the chance to be involved, despite knowing not only that it’s illegal, but that Ethan, a respected professor of public health and bioethics at Columbia University, loathes Nash’s practices so much that he’s written newspaper op-eds against the man.

Fast-forward twelve years and Claire is in hiding with her daughter Abby and with Nash. Their secret had come out while she was eight months pregnant, causing an uproar, and so they had fled New York City for lives under assumed names, leaving Jillian to face the legal consequences alone. Once out of prison, Jillian is not above breaking the law again in order to find the two who left her high and dry. But are her motives truly as sinister as they seem?

Jillian knows that in order to make scientific progress, sometimes, you have to break a couple of eggs (yes, that is a horrible pun, and no, I’m not sorry.) When Nash confronts her about a questionable decision she’s made, her response is to brandish a biography of Robert Edwards and Patrick Steptoe at him:

“Of course.” He crosses his arms. “The fathers of in vitro.”

“What does that have to do with you?”

“A lot, actually. I’m guessing you haven’t read their bio.” I clutch the book tightly. “They knew the world would be so scandalized by a baby created in a dish that the experiment would never be permitted, so they were daring enough to carry it out in secret, then hid it for the entire nine months of the mother’s pregnancy. It was only after Louise Brown was born healthy that they announced it, when no one could question the outcome. And today IVF is as routine as going to the movies.”

The fascinating medical and moral quandaries of this form of genetic editing are both thoroughly explored and embodied by our flawed main characters. And despite the brisk pacing of the tale, you never feel that the intellectual issues are given short shrift. This novel does a terrific job of presenting controversies in bioethics in the easily accessible prose of a psychological thriller: you might not agree with the outcome, but it still makes a compelling case for what is ultimately decided.