July 18, 2022
In David Tromblay's Money the Hard Way, a former Military Police-turned-bail-bondsman with a bit of a nihilist streak enters prison as an informant for the feds, who seek the inside source of a drug so potent it makes Fentanyl look like aspirin. Read on for C. Matthew Smith's review! 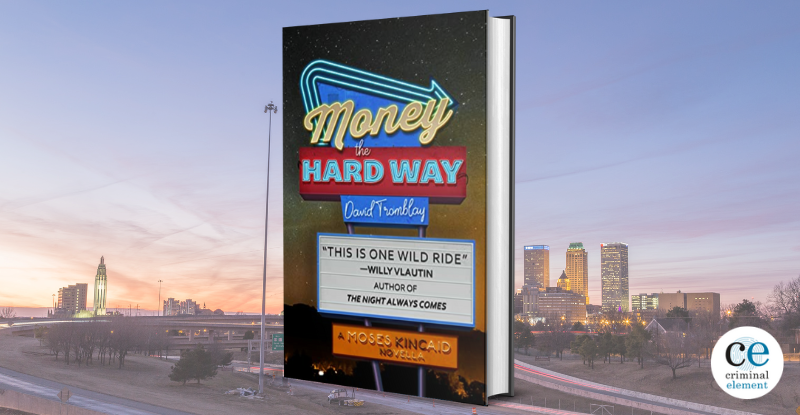 Last year, David Tromblay’s novella Sangre Road (Shotgun Honey) introduced readers to Moses Kincaid, former Military Police turned bail bondsman with a bit of a nihilist streak. In the heyday of the mid-’90s opioid epidemic, Moses travels to Oklahoma in search of a fugitive who skipped town. The novella follows his travails as he squares off with members of a biker gang, falls in love with a waitress who shares his gift for sardonic gab, and dodges death in increasingly bizarre situations. It’s a surreal trip with a discomfiting ending that in lesser hands could have faltered badly. Tromblay, however, sticks the landing.

Money the Hard Way picks up almost exactly where Sangre Road leaves off. Moses has suffered both great loss and physical injury, and he uses whatever narcotics he can lay his hands on (Fentanyl, mostly) to take the edge off both. Despite this, or perhaps because of it, he finds himself mired in place–unable to forget the loss that haunts him, yet equally unable to leave Oklahoma behind. To make ends meet, he takes on work as an unlicensed bail bondsman with the shady Arlo Bice, who lickety-split has Moses boosting cars put up for bond and joining him on raids to bring in the subjects of bench warrants. Nothing goes quite right, of course, and soon a grave mistake finds Moses facing significant jail time. The only option short of long, hard time in an Oklahoma correctional facility: Enter the Big House as an informant for the feds, who seek the inside source for a drug so potent it makes Fentanyl look like aspirin.

If the plot itself feels just left of center for the average crime novel, it’s Tromblay’s bold prose that truly sets it apart. Told in first person, Money the Hard Way again places the reader inside the head of a man both clever and troubling. Whereas the voice in Sangre Road hews primarily toward sarcasm and dry wit, Moses having only just begun his downward slide, Money reveals a man battling a growing addiction and en route to losing his grip, though he’d hardly admit it. His slantwise view of the world is still there, as are his humorous asides, but they’re as amped and rambling as his actions are careless. Readers who have by now developed an affinity for the man will find much to trouble them—like observing a friend who badly needs help.

Money is about as far from paint-by-numbers crime fiction as one can get. There’s no one particular antagonist, no particular murder to solve or heist to pull off. Instead, the series of misadventures that comprise this novella serve to illuminate a man on the brink. It’s a compelling portrait, told in Tromblay’s typically assured prose, that will linger in the mind long after the final scene.

C. Matthew Smith is an attorney and writer whose short stories have appeared in and are forthcoming from numerous outlets, including Mystery Tribune, Mystery Weekly, Close to the Bone, and Mickey Finn: 21st Century Noir Vol. 3 (Down & Out Books). He’s a member of Sisters in Crime and the Atlanta Writers Club.