November 12, 2021
In the sixth installment of Sherry Thomas's series set in Victorian England, Charlotte Holmes comes face to face with her enemy when Moriarty turns to her in his hour of need. 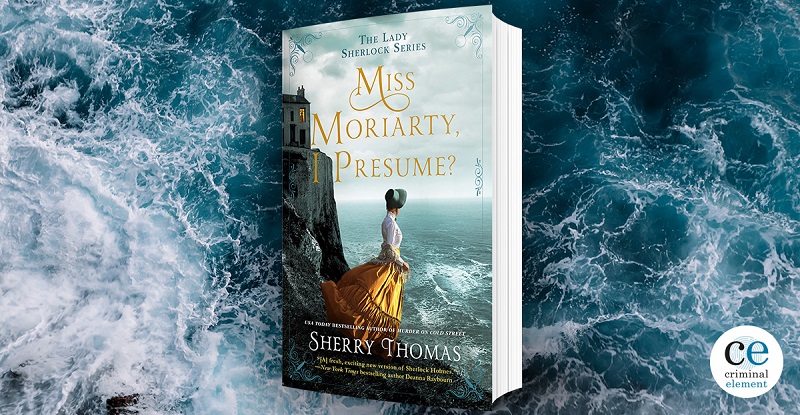 Sherlock Holmes’s sister Charlotte is a consummate detective. Clients flock to her door (or rather her sitting room, conveniently situated next to her fictionally ailing brother’s bedroom—the easier to “consult” with him). But who would anticipate that Moriarty, her sworn enemy, would turn to her in his hour of need? Moriarty has a tortured, tenuous relationship with his daughter. She has lived apart from him for years. Ever the control freak, Moriarty employed watchers to oversee Miss Moriarty’s activities. In recent months, the watchers have not set eyes on her and Moriarty is afraid that something dreadful has happened to his daughter. Can Charlotte Holmes unravel this mystery? Does she have a choice? Moriarty’s request has a domino effect on the members of Charlotte’s close-knit team.

Consider Livia, Charlotte’s younger sister. Her personal life, like Charlotte’s, has evolved in tandem with her detective work. Mr. Mears, Mrs. Watson’s butler (Mrs. Watson is Charlotte’s right-hand woman) shares some distressing news with Livia when she arrives on her sister’s doorstep: the reason Charlotte and Mrs. Watson are not home is that they are meeting with a representative of Moriarty. This news has Livia fearful for Mr. Marbleton, her peripatetic and elusive beau, because Marbleton has an inexplicably convoluted relationship with Moriarty.

An entire doomsday unfolded in her mind, dark visions of Charlotte and Mrs. Watson, and perhaps even Lord Ingram, in some rank, horrible dungeon on the Continent. Would they find Mr. Marbleton already there, Mr. Marbleton who could no longer outrun Moriarty?

Several times she nearly turned around to flee. But somehow, though her knees bucked with every step, she kept moving forward, Mr. Mear’s words echoing in her ear.

She did not want to be too late.

Courage is not in short supply amongst the men and women dedicated to thwarting Moriarty’s evil schemes. Lord Ingram brings a miniature Maxim gun with him when he returns to London from the country. He’s not bringing a knife to a gunfight. Moriarty tells Charlotte that after her grandmother’s death, his daughter joined a group of Hermetists who formed a community in Cornwall.

Charlotte had no choice but to look up in surprise. “By Hermetists, you mean those who follow the teachings of Hermes Trismegistus, as found in the Corpus Hermeticum?”

“Correct. It is difficult for me to acknowledge that I have a daughter who is an occultist, but there it is.”

To Charlotte, the occult was but a religion that had yet to muster an army and anoint a king. But she nodded sympathetically before resuming her shorthand note-taking.

“I was . . . vexed. The next time I met with her, I expressed that vexation. She replied that she was both of age and no longer dependent on my support. Therefore she was free to follow the dictates of her own will. And if it pleased her to live among occultists, for a while or forever, then that was what she would do.”

Moriarty is up against a foe who is as stubborn and unyielding as himself. It’s fortunate he can’t read Charlotte’s mind: she is not as in awe of the occult as he seems to be. But what did his daughter do to prevent herself from being swept back into the family fold? The saga of the one that got away continues.

“Very well, I threatened to burn the commune to the ground and she came home with me. But in the fifteen months that followed, she became engaged to no fewer than six unsuitable men—and I assure you, Miss Holmes, hers had not been an existence into which unsuitable men were granted entrée willy-nilly.”

How brilliant of a daughter kept against her will. After this description of the father-daughter relationship, Charlotte is under no illusion that it will be an easy task to uncover Miss Moriarty’s whereabouts. Off she and Mrs. Watson go to Cornwall. One of the members of the commune tells Charlotte that their “community is one for quiet contemplation, rather than vigorous interaction,” but Charlotte is not deterred by that implicit warning. The Garden, as the commune refers to itself, doesn’t take advantage of the magnificent views of “sea and moorland”—it’s walled off from the world.

But the walls were there, a greater darkness in all directions, and they made the place, with its increasingly fierce crosscurrents of wind, feel airless.

At its core, Miss Moriarty, I Presume? is the story of a daughter’s fierce determination to set her own course—something Charlotte understands well. Miss Moriarty’s opponents are equally determined and ruthless. Charlotte and Mrs. Watson put themselves in peril to uncover the truth. Charlotte in particular takes ungodly chances, all to find justice for her clients, and to protect the hard-won happiness of her inner circle. Speaking of happiness, Charlotte and Lord Ingram carve out time for themselves, in the most delicious of ways, with props like a “frou-frou suspender,” and “very pink silk stockings.”

Charlotte gazed at sunlit pastures and gleaming farmhouse windows and thought of Livia, who yearned ever for warmth and light.

I am a queen upon this board, Charlotte had once told Lord Ingram, and I do not play to lose.

Sherry Thomas has created a complicated, interlocking world in her The Lady Sherlock Series.  Miss Moriarty, I Presume? is a complex story, full of twists and unexpected turns. Settle in for a delightful read, full of red herrings and memorable set pieces and above all, let the talented Sherry Thomas dazzle you as she performs literary sleights of hand at every turn. Brava!