April 25, 2022
Mirror Lake is the third novel in Juneau Black's Shady Hollow mystery series, in which Vera Vixen takes on her most challenging case yet: solving the murder of a rat who appears to still be alive. 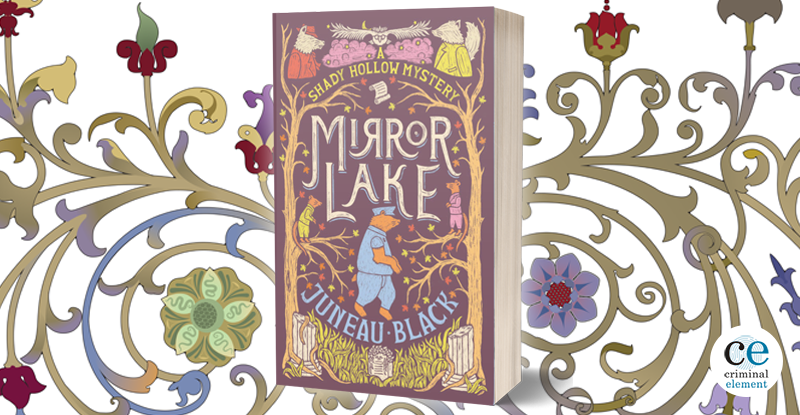 Vera Vixen is enjoying celebrating the end of fall at Shady Hollow’s annual Harvest Festival in the company of her beau, Deputy Orville Braun. It’s a rare day off for them both: she’s the local newspaper’s star reporter, while he’s the one who usually does the heavy lifting in the town’s police station, where he’s the only other employee besides his boss, Chief Of Police Theodore Meade. When Orville spots Theodore at the Festival instead of at work as promised, he becomes incensed enough to take the stage:

“Ladies and gentlemice, if I could have your attention, please.” Orville’s voice boomed out over the crow. “I have an important announcement to make.”

The crowd murmured and whispered. Vera caught a few words here and there. Then she heard [gossip columnist] Gladys’s distinctive loud tone. “Yes. I knew it! He’s going to propose to Vera!”

A sheep standing next to Gladys tried to shush her when they saw Vera staring. Could it be true? Vera wasn’t sure how she felt about it. She liked Orville very much, but they had not been dating all that long!

Vera is not the only nonplussed festival attendee when Orville’s announcement turns out to be professional instead of personal. He’s decided to run for the elected position of Chief Of Police, figuring that if he’s doing most of the work and taking on most of the responsibility, he might as well have the title to go with it. Theodore, of course, is not going to go down without a fight, leading to one of the more interesting election seasons for the usually placid town.

BW Stone, Vera’s editor, wants her to get the inside scoop on the campaign, but Vera rightly feels that this would be unethical. She decides to consult with local lawyer Walter Fallow however, just in case. It’s while at his offices near Mirror Lake that she and the attorney hear a blood-curdling scream from one of the homes nearby.

Coming out to investigate, they discover that Dorothy Springfield is accusing her husband Edward of being an imposter at best and a murderer at worst. Given both Dorothy’s history of mystical leanings and the very recent death of her beloved mother-in-law, everyone assumes that she’s just having a bit of a nervous break and that her poor husband is suffering the consequences. Dorothy flees to a nearby bed and breakfast, refusing to stay in the family home, and Vera wonders if there isn’t a story here—especially since she’ll need to placate a BW put out by her refusal to cover the election. Vera’s wise friend Sun Li helps to put Dorothy’s plight into perspective for her:

Sun Li took a slow sip of tea, then said, “I’ve traveled quite a bit in my life, and I’ve seen a lot of things other folks would describe as impossible.”

“What are you saying?” Vera asked curiously.

“Just that if you do plan on investigating this—and it’s intriguing enough to be right up your alley—I’d suggest you start with the assumption that Dorothy is correct and that her account is reliable. Everyone else seems to think she’s made a mistake. And if you think that, too, you’ll only discover what everyone else will. Try a different approach.”

With election fever gripping Shady Hollow, as well as the arrival of a handsome author who may have designs on Vera, our heroine certainly has a lot on her plate even as she tries to figure out the truth behind the rupture between the Springfields. But with her erstwhile protector Orville absorbed in campaigning, will Vera be able to stay out of mortal peril in her attempt to uncover the truth?

This anthropomorphic mystery series is the coziest of cozy reads, a sort of Beatrix Potter for grown-ups with a plucky fox reporter and her smart, if by-the-book, bear boyfriend solving crimes and bringing evildoers to justice. The conundrums are never too complicated but the dialog and details of the woodland creatures going about their small-town lives are almost effortlessly charming. The books, of which this is the third in the series, are wholly engrossing and make for one of the more pleasant ways to while away a few hours cozily reading.