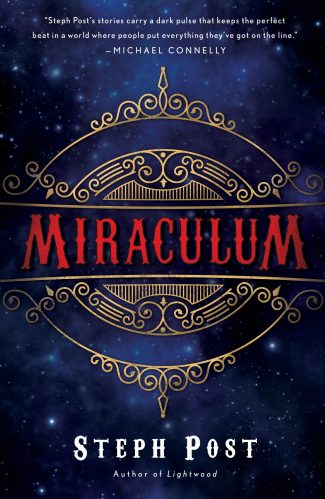 Miraculum is Steph Post’s new novel about a tattooed snake charmer, Ruby Chole, who works in her father’s carnival. Ruby is attracted to Daniel, a new employee of the carnival, though his timing is troubling. Arriving immediately after tragedy strikes, Daniel appears to be connected to the recent calamity and may be keeping other secrets of his own.

Pushcart Prize nominee Steph Post, for good reason, has a sterling reputation in the crime fiction community. With Miraculum, she’s taken a turn from her contemporary Florida-set Judah Cannon series into the world of carnies, roustabouts and the like in the early 20s South. This story focuses on tattooed snake charmer Ruby Chole, whose father runs Pontilliar’s Spectacular Star Light Miraculum, the Star Light for short. Ruby isn’t exactly happy at the Star Light, but her appearance limits her career choices, and the carnival is her family, despite her fraught relationship with her father. She’s also nursing a broken heart since Hayden, who used to paint the beautiful murals adorning the circus trailers, left a while back. When their resident geek (his act involves biting off the heads of chickens) hangs himself, Ruby is baffled, and uneasy.

Then Daniel, the new geek, arrives as if by design:

Pontilliar huffed and eyed him suspiciously while Daniel waited patiently for the man to take him in. His immaculate black suit, sharp, perfectly creased and tailored, was more expensive than anything Pontilliar had or would ever own. He watched Pontilliar’s eyes as they traveled up his body, from his gleaming crocodile skin shoes to his diamond cufflinks to his black silk tie and pocket hankerchief, still crisp even in the unbelievable heat. His jet black hair was swept back with pomade and though his suit called for a homburg, Daniel refused to wear hats. He noticed Pontilliar avoided his eyes. They always did. Daniel waited a moment more and then flashed his dazzling smile to display perfect, white, even teeth.

His arrival will change the fate of the Star Light, but another arrival rocks Ruby’s world. Hayden is back, and he’ll do anything to make things up to Ruby, which won’t be easy. In this world, however, there are much more serious things to consider, such as the falling death of Tom, the boyfriend of one of Ruby’s best friends, who dances in the hootch tent. Accidents aren’t exactly unusual, but Tom’s broken body at the foot of the Ferris wheel is a shocking site, and Hayden has a bad feeling. Could a killer be in their midst? If so, why would he want to hurt Tom?

The answer to Tom’s fate is…rather mundane. I don’t mean that in a bad way at all. In fact, Post makes it clear early on that Daniel is decidedly not of the human variety. It’s something that Ruby senses right away:

Ruby’s eyes were open, but she could not see. Or rather, what she saw could not be there. A thousand glistering constellations all on fire, swirled around her. Or they were her. Or she was they, moving in and out of the ether, hurtling towards an empyrean supernova that was somehow inside her chest. Ruby could feel herself draw a breath, but as she did, her chest was pierced with an incalescent arrow and the fever that blossomed from the wound shrouded her in the warmth of wings and she knew herself going backwards into millennia.

Daniel is prone to acts that are beyond the pale, and the reason? A creature such as himself gets, well, bored. Moving people around like chess pieces is just another way to amuse himself, which is what makes him so scary. He killed Tom because he was bored. But he feels an undeniable pull toward Ruby and seeks to find its meaning. And his rage knows no bounds.

As Ruby tentatively rebuilds her relationship with Hayden, the Star Light rolls on, and Post takes a deep dive into Ruby’s past, from her mother’s tragic death when Ruby was only a teen, to Ruby coming down from her Appalachia mountain home, a playbill clutched in her hand, in search of her father and his traveling circus. She also details how Ruby got her tattoos, which plays a very, very important part in the story.

Ruby knows that something isn’t quite right about Daniel, and a shocking act of murderous destruction will force her to act.

Post takes time to build her characters and her world, and what a world! If you’re fascinated with the traveling carnivals of the past, this is absolutely the book for you. She perfectly captures the lingo and the hustle and bustle of the business and of the midway. You can practically smell the popcorn and the cotton candy.

Their faces were shining with gluttony and the expectation of more. They had played a few games of chance, knocked over a few milk bottles, maybe already won a chalkware prize. They had stuffed themselves with popcorn, with roasted peanuts and cotton candy, and were buoyant, spending their hard-earned pennies and nickels on whatever delights floated into their view. If anything, they were astonished by the colored lights, by the height of the Ferris Wheel and the speed of the Whip, by the crush of people, moving in all different directions, a disorganized herd scattering toward wonders and then realigning and bunching back into crows. These were faces flushed with excitement, but not yet transformed. That would come later in the night.

Post takes readers from a bayou village steeped in voodoo to the stifling heat of the southern road that the Star Light travels, populating her story with delightfully strange and eccentric characters. This wonderfully odd supernatural tale, full of myth, dark magic, and more than a hint of Southern gothic will entrance readers, and a few comparisons will certainly be made to Bradbury’s Something Wicked This Way Comes.

Come for the dark carnival of wonders, stay for Post’s exquisite storytelling.