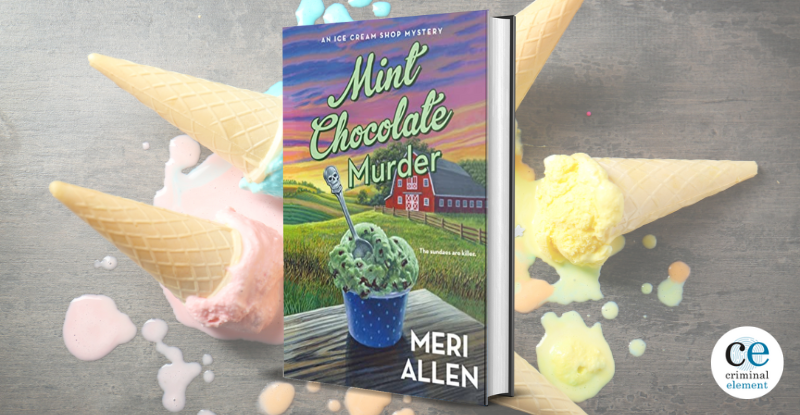 Former CIA librarian-turned-ice cream shop proprietor Riley Rhodes is happy to accept a big catering job as the New England summer draws to a close, padding her coffers for the inevitably leaner winter months ahead. The owner of the nearby Moy Mull Castle, a grand estate patterned on actual Scottish architecture that was later turned into a hotel before its current incarnation as an arts colony, is throwing an end-of-summer ice cream social in honor of the acclaimed photographer Adam Blasco. Blasco, coincidentally, will be taking all the photos for Moy Mull’s next cookbook, featuring its glamorous if reclusive patron, Maud Monaco. Riley is a little thrown by what she sees as the contrast in styles:

I recalled a long-ago visit to an edgy art gallery in New York City. Blasco’s work had been exhibited in one of the galleries. I had vague memories of unsettling, life-sized images of half-naked models. His work included many techniques, like unusual exposures or the addition of painted highlights to create one-of-a-kind works. I recalled a particularly disturbing work that included slashes made by a box cutter.

Why on earth was an <i>avant-garde</i> photographer like Adam Blasco taking photos for a cookbook?

Blasco turns out to be as obnoxious as he is talented, in stark contrast with the serene, collected Maud, whose modeling career was launched by his photos of her as a teenager. Maud later went on to marry a European crown prince, though retired back to her country of birth after becoming a widow some decades later. Now she spends her money supporting artists – including, apparently, Blasco and his small team—and indulging in rare but well-attended parties that she’s happy to spend generous sums on.

While Riley’s number one priority is earning her lavish paycheck, she’s also happy to be charmed both by Maud and by Moy Mull’s majordomo, Prentiss Love. They sweet-talk her into doing extra work—all paid for, of course—but also prove to be excellent neighbors, offering her the run of the gardens and use of the archival library after a short tour of the fascinating premises. The castle even has a dungeon, though its use has been heavily modified since it was originally built:

“That is one disappointing dungeon,” I said.

“They did keep the chains!” He pushed aside a rolling white board revealing rusted chains, attached to the wall with iron fittings. I smiled at Prentiss’s excitement, but remembered colleagues in my previous workplace who’d undergone interrogation training–and worse. The low ceilings, lack of windows, and restraints–even though antique–gave me a less-than-pleasant sense of claustrophobia.

“I saw pics of the original room, it had wonderful rough brick walls. But when it was a hotel, they transformed it into a conference room,” Prentiss said. “Well, still used for torture as you can see.”

Riley’s newfound knowledge of the grounds will come in handy after Blasco disappears overnight, only to be found dead in the locked dungeon the next day, apparently from a bee sting. While the scene was carefully set up to look like an accident, it quickly becomes clear the photographer was murdered. When one of her employees is implicated in Blasco’s death, Riley will have to use all the skills she picked up while working with the CIA in order to find the real killer, before she becomes the next victim herself.

I really enjoyed the many little mysteries wrapped around the main plot of Blasco’s murder, and how entertainingly Meri Allen constructs and presents them all. There wasn’t a dull moment as Riley uncovered the truth behind these conundrums, even as my heart hurt with hers when she realized who was behind a string of seemingly unrelated thefts. Riley is a wonderful heroine, with lovely friends and charming pets. The scenes with the spoiled feline, Sprinkles, were a hoot, even if she’s the kind of cat I’d rather read about than live with.

I’m definitely looking forward to reading more of this fun series that’s loaded with both humor and smarts. This installment also included a recipe for pumpkin spice ice cream in the back. Perhaps by the time the next book comes out, I’ll be brave enough to try making ice cream at home using one of Ms Allen’s delicious-looking recipes!