March 16, 2020
Mimi Lee Gets A Clue is the start of a new cozy series from Jennifer J. Chow. Mimi Lee is in over her head. There's her new Los Angeles pet grooming shop to run, her matchmaking mother to thwart, her talking cat Marshmallow to tend to—oh, and the murder of a local breeder to solve...now if only Mimi hadn't landed herself on top of the suspect list. 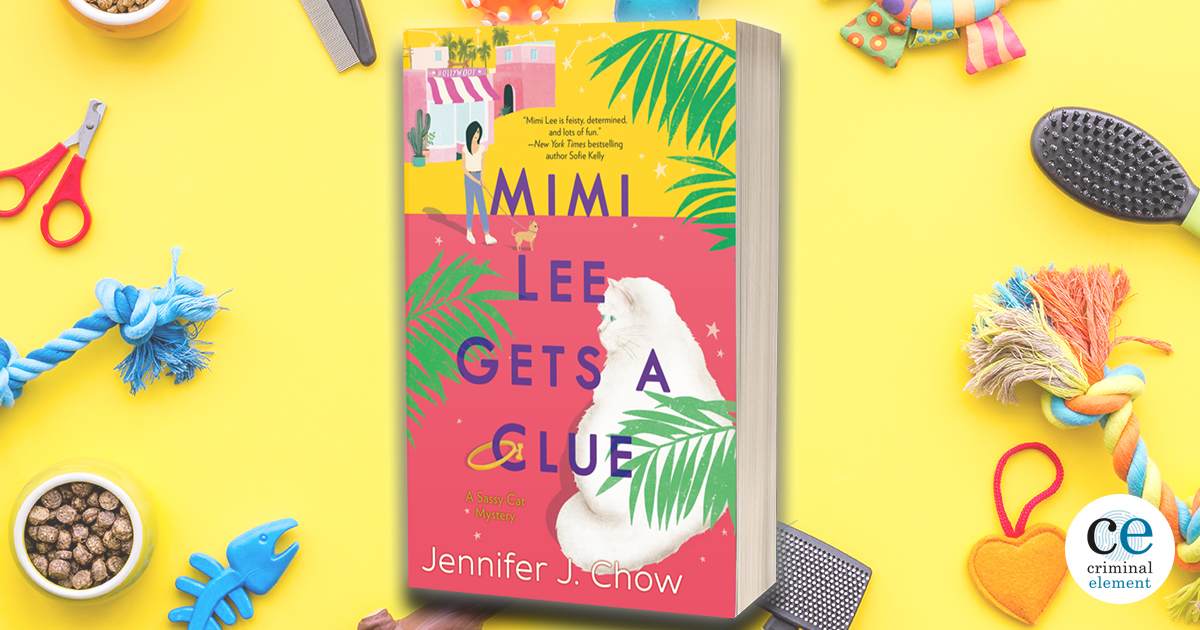 Our title heroine, Mimi Lee, has just opened the business of her dreams, a pet grooming salon in Los Angeles, with the help of rich investor Pixie St James, whose dog she saved from drowning. Sure, business is a little slow to start, but she’s sure that once word spreads of how good she is at her job, the clients will come knocking down her door. Fortunately, Pixie has a few also-wealthy friends with cute pups who are happy to give her salon a try. After grooming several darling little Chihuahuas with mobility problems, however, Mimi suspects that an unprincipled breeder has been running a con on Pixie’s friends.

Mimi goes to confront Russ Nolan and discovers that it’s worse than she feared: he’s also mistreating his animals in addition to deceiving prospective pet owners. After a very public showdown, Mimi tries to call in the authorities, but finds herself stymied by the amount of red tape required to stop Russ and free his dogs. Things get worse when Russ is found dead shortly thereafter and Mimi herself becomes prime suspect in his murder.

Fortunately, Mimi has the help of Marshmallow, the adorable rescue cat her younger sister, Alice, gave her as an opening day gift. Well, adorable on the outside, at least: on the inside, Marshmallow is a pile of hilarious snark who just so happens to be able to communicate with Mimi telepathically. At first taken aback by Marshmallow’s abilities, Mimi soon realizes she can use their unusual connection to her advantage, when they go hunting for clues that might clear her in a warehouse full of dogs:

[Marshmallow’s] eyes gleamed in the dark. “Don’t worry, I’ve got this. Just slide the door open a crack.”

I did as he requested and watched as Marshmallow crept up to the door’s edge. He gave a short meow. A moment later, he received some yips back. He then made a few strong purrs, and the dogs inside grew silent.

Marshmallow flicked a dismissive paw at the warehouse. “Dogs are so gullible.”

While Marshmallow is the highlight of this novel, he’s not the only ally in Mimi’s corner. There’s also her new neighbor, Hawaiian native Josh Akana, with whom she begins an unbelievably sweet romance.

But since this is a murder mystery, and better yet an #OwnVoices murder mystery, it’s not all lightness and sass. As Mimi tries to clear her name, she runs into the age-old predicament of the Asian-American: being assumed to be a recent immigrant who can barely speak English simply because of the way she looks. When a group of PTA moms mistake the biracial, American-born Mimi for a recent Korean arrival to their social circle, she’s clever enough to try to turn the situation on its head:

Although… could I use her confusion to my advantage? At least she’d welcomed me into the group. I didn’t correct the woman, waiting to see how things would unfold. She soon waved me over to sit down and help stuff papers.

I copied her movements, wondering how much English my immigrant doppelganger knew. I ventured forth a word: “Tam-my?”

The women paused in their actions and gave one another snide looks. The collating lady said, “Tammy is sick.”

The other women snorted, and a firestorm of gossip erupted. They probably thought my “foreignness” meant I wouldn’t be able to understand their rapid chatter[.]

Mimi Lee Gets A Clue has some really terrific general Asian-American representation, but it honestly doesn’t do as well in representing specifically Malaysians, the purported ethnicity of Mimi’s mom. I’m not sure what form of pidgin Ma was speaking, but it was definitely not Manglish, and I say this as a native Malay speaker who grew up and went to the university in Malaysia. I also consulted on this with other Malaysians and Malaysian-Americans of various races, who were all similarly bemused by Ma’s way of speaking. Sure there were a few terms used correctly, and the food descriptions were accurate. And while I know every culture contains multitudes, Ma’s obsession with marrying off twenty-five-year-old Mimi to whichever guy with a pulse she can find is far less representative of a Malaysian culture that values education and professional accomplishment than of, say, the mindset of a conservative American woman in the 20th century who can’t fathom how a woman could possibly function without a man, any man. I’m always so excited when I find out that there’s Malaysian rep in an American book, even if it isn’t all positive—Malaysians for sure can be superstitious and meddlesome, like Ma—but the overall cultural characterization here wasn’t negative so much as it was painfully inauthentic, and that was disappointing.

That aside, this novel is a frothy read for any pet-lover who enjoys a little mystery and romance with Asian-American protagonists written by an Asian-American author. Just don’t expect a whole lot of realism from this admittedly paranormal tale.