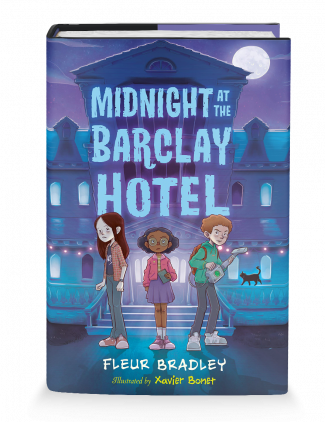 Midnight at the Barclay Hotel

In Midnight at the Barclay Hotel, JJ Jacobson convinces his mom to accept a surprise invitation to an all-expenses-paid weekend getaway at the illustrious Barclay Hotel. He never imagined that he’d find himself in the midst of a murder mystery…

The embossed invitations are delivered by courier to five distinct individuals on a Tuesday: a cowboy, a librarian, a Chief Executive Officer, an actress, and a detective. These five people are to be congratulated because they are the winners of a weekend getaway to the Barclay Hotel. At first, the CEO and the detective aren’t convinced they should go – but then the CEO’s son, JJ, and the detective’s granddaughter, Penny, make convincing arguments for a weekend away…and the kids convince the adults to let them tag along.

But when JJ and Penny arrive, they quickly realize that everything is not as it seems in the Barclay Hotel. Rumors of ghosts abound. And Mr. Barclay himself, the hotel owner has been recently murdered with JJ’s mother as one of the potential suspects. With the help of Penny’s investigative skills and the inside knowledge of the hotel from Emma, who lives at the hotel, JJ sets out to clear his mother’s name and maybe catch a ghost or two in the process.

Midnight at the Barclay Hotel by Fleur T. Bradley is not only fun and sweet – despite murder and mayhem – but is a great introduction to the mystery genre for middle-grade readers. Bradley, who focuses on creating action-packed stories for reluctant readers, brings a lot of heart, intrigue, and (of course) mystery to her newest novel.

The Barclay Hotel gives a lot of nods to the Stanley Hotel – the central hotel in Stephen King’s The Shining. It’s located in Colorado. It’s infested with ghosts. And now it’s owner, Mr. Barclay, appears to have been murdered. Now, the cowboy, the CEO, the actress, and the librarian find themselves suspected of poisoning the deceased owner. All have motive. All have means. All have opportunity.

And Mr. Barclay seems to have prepared a contingency plan for his untimely demise.

“Please give me a chance to explain Mr. Barclay’s intention for this game,” Mr. Clark said, slightly irritated. This conversation was getting away from him. “The police did a preliminary investigation and Mr. Barclay’s physician attended as well. Both concluded that Mr. Barclay’s death was caused by a heart attack. But I know it was really death by poison!”

There was a dramatic gasp, coming from the actress in residence, Ms. Fleming. “Murder. Poisoning means murder,” she added, stating the obvious.

“Who said he was poisoned?” the detective countered.

“I requested that the police revisit this matter, so the medical examiner did an autopsy,” Mr. Clark said. His face was sad. “It was indeed poison that killed Mr. Barclay.”

“That’s murder all right,” Penny whispered, so only JJ could hear.

“Crime scene investigators have already been here at the hotel. Detectives wil be coming on Monday to gather evidence and question witnesses,” said Mr. Clark. “However, Mr. Barclay was sure you – the four suspects and one detective – could solve the murder this weekend.”

What Mr. Barclay did not anticipate was the participation of three kid ‘stragglers’ jumping into the investigation. JJ knows his mother is no killer. Teaming with Penny and Emma, JJ sets out to clear his mom’s name. Together, they hatch a plan to investigate the adults.

But the kids may be in a little over their heads.

There is more to Barclay Hotel than meets the eye. A ghostly woman has been spotted in the library. There are various traps and “games” throughout the hotel – so even though there is a Cupcake Shoppe and a bowling alley, there are plenty of opportunities to get into trouble.

Take, for example, the elevators. On the way down to the bowling alley, JJ and Penny get trapped in the elevator. No one can hear them. The temperature is climbing. Is the killer trying to trap them? Then a grid with nine squares appears on an electronic pad within the elevator.

Penny studied the pad with the nine squares. “It looks like tic-tac-toe.”

“Maybe if we play, it will let us out of the elevator,” JJ said.

Tic-tac-toe looks easy. But it’s a lot harder to win than it seems.

“Do you know how to beat the game?” Penny asked JJ.

JJ said, “It’s been a long time since I played…I think if you start you have the advantage.” The air was getting stuffier by the second. They had to hurry.

After a moment of hesitation, Penny touched the center square. A circle marked the spot.

The top right showed an X. Penny responded with a circle in the bottom corner. The game continued but ended in a tie. And then the board cleared. This time JJ played, but the game just kept coming to a stalemate. No one was winning. And what was worse, the computer seemed to get frustrated, speeding up its answers, the pad feeling warm to the touch.

Fleur T. Bradley’s Midnight at the Barclay Hotel is an ideal introduction to the mystery novel for kiddos. Many Agatha Christie references are sprinkled throughout the story. Both active middle-grade readers and reluctant middle-grade readers will find a lot to enjoy here – action, puzzles, ghosts, and murder. What’s not to love?