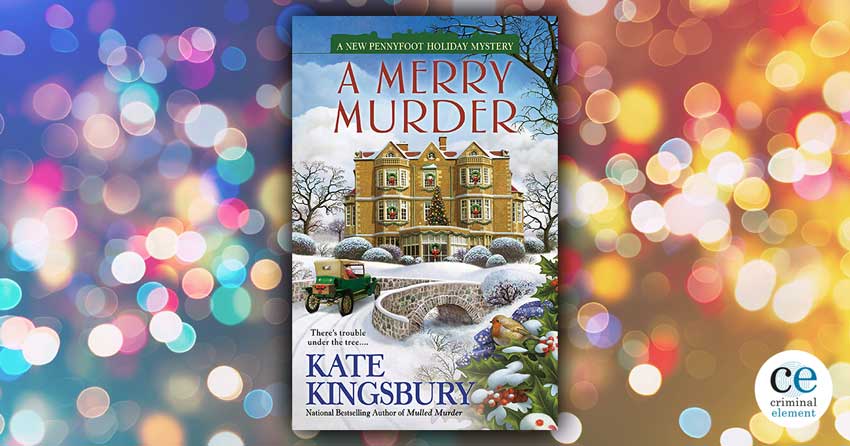 A Merry Murder by Kate Kingsbury is a special holiday Pennyfoot Hotel mystery, where one of the guests turns up dead and owner Cecily Sinclair Baxter realizes the hotel’s Christmas curse has struck again.

A Merry Murder is the perfect pre-Christmas treat for lovers of cozy Christmas mysteries and the upstairs/downstairs world of Downton Abbey. Author Kate Kingsbury thought she had said farewell to Christmas mayhem and murder at the Pennyfoot Hotel, but she couldn’t close the doors to her Edwardian world.

Those characters, however, were not done with me. They continued to haunt me, popping into my mind while I watched TV, or waking me up in the night to remind me they were still alive and kicking.

Kingsbury’s insomnia notwithstanding, readers will love her early holiday gift.

Like an aristocrat at the helm of a stately home, Cindy Sinclair Baxter is the chatelaine of the Pennyfoot Hotel. She graciously welcomes guests to her hotel while ensuring that her household staff keeps everything running smoothly behind the scenes. While chief housemaid Gertie stomps “down the stairs” with the linens, she reflects on what makes Mrs. Baxter “testy.”

The Pennyfoot’s owner was always kind and considerate to the downstairs staff, as long as they obeyed the rules and minded their manners. She could be an ogre, however, if one of them did something to upset the hotel guests.

Fierce sentiments, but madam’s staff knew that she believed the best of them and fought hard for them when outsiders—be they guests or the constabulary—pronounced them guilty. Given the hotel’s “Christmas curse,” Cecily has had to go to bat for them more than once.

Gertie finds a dead body in the laundry room: a male corpse with a lovely scarf tied around its neck. She tells Cecily right away—the proprietress prays that it’s not murder, but “her hope that the cause of death was for medical reasons seemed doomed,” considering the laundry-room location.

That was odd, and in Cecily’s experience, odd meant a foul deed had taken place.

An elderly couple approached them on the stairs, and Cecily paused on the landing to let the guests pass. The woman was dressed in a fine purple satin gown beneath a navy blue coat. Blue and white ribbon roses decorated the wide brim of her hat, which almost hid her eyes. She swept up past them without a word, but the gentleman doffed his top hat at her and smiled as he turned the corner.

Deciphering the code of an opaque Edwardian mystery can be challenging, but consider: decoration on a woman’s hat that “almost hid her eyes” and a guest who sweeps “past them without a word” while her partner doffs his hat and smiles. These are clues, and when guests, friends, or staff act out of character, Cecily takes notice.

P.C. Northcott arrives to take charge of the murder scene. His inflated sense of his powers of detection is not shared by Cecily, who “was none too happy that she would have to deal with the bumbling policeman again.”

That meant the brunt of the investigation would fall on her shoulders once more—something she’d hoped to avoid.

Is there a red herring—a solution to the crime that allows Northcott to make a swift arrest and rest on his laurels? He particularly enjoys resting in Cecily’s convivial kitchen where her cook, Mrs. Chubb, “bribes” him with “a constant flow of pastries and other such treats,” freeing up Cecily to detect undeterred. Northcott finds a note in the victim’s trousers, in a woman’s hand. Apparently, Mazie, Cecily’s recent hire, asked Percy to meet her in the laundry room at midnight. Cecily’s husband is not buying it.

Baxter stared at her as if she’d lost her mind. “Mazie?” He shook his head in bewilderment. “Mazie? That meek little maid we hired two months ago? She doesn’t look capable of killing a chicken, much less a man.”

Sam Northcott is not particularly imaginative, and to his way of thinking, Mazie’s note is his bird in the hand—no need to look further. Unfortunately, Mazie has scarpered, but the policeman is sure she’ll soon be found and taken into custody. Case closed.

Cecily does not share Sam’s opinion—she persuades him to leave the scarf in her custody and encourages him to visit the kitchen to interrogate the staff over a “plate of mince pies.” In the meantime, Cecily will visit Mazie’s home—anything to prevent “a false arrest and conviction.”

She had to admit, she was feeling a surge of anticipation. It had been a while since she had been on the trail of a killer. Despite the anxiety of upsetting the guests and ruining the Christmas festivities, it felt good to be tacking another intriguing mystery.

Cecily Sinclair Baxter was back in the hunt, and she could only hope that the outcome would be as fruitful in bringing a villain to justice as her past endeavors.

Edwardian England was a time of great social change—take the women’s suffragette movement—but snobbery and class consciousness remained an everyday part of life. It’s not surprising that P.C. Northcott would look for a guilty person in the lower classes rather than the aristocracy. But the green baize door that separates upstairs and downstairs at the Pennyfoot Hotel opens in two directions, and Cecily straddles both worlds. It’s a treat to watch her calling for a horse-drawn carriage or, alternatively, her new-fangled motor car as she searches out the real killer. Welcome back, madam!