Book Review: Love and Death Among the Cheetahs by Rhys Bowen 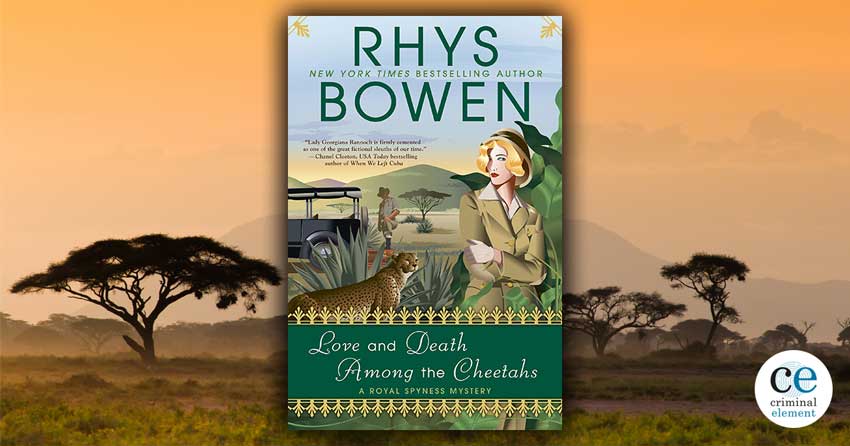 Love and Death Among the Cheetahs by Rhys Bowen is the 13th Royal Spyness Mystery, where Georgie and Darcy are finally on their honeymoon in Kenya’s Happy Valley when murder crashes the party.

Lady Georgie marries her Darcy in splendid style. Her bridal attendants are Elizabeth and Margaret Rose, England’s little princesses, in a church full of senior members of the royal family. Georgie is a very minor royal, yet she’s a favorite of Queen Mary. She is of service to Her Majesty because she keeps the Queen apprised of what David and “That Woman” are up to (David, the Prince of Wales, and his scandalous American paramour, Mrs. Wallis Simpson).

Georgie and Darcy are as poor as aristocratic churchmice; the first part of their honeymoon is spent on a borrowed canal boat. They leave their rocking honeymoon suite when the champagne goes flat and the food runs out, but Darcy has a surprise: they’re off to Happy Valley in Kenya. This is the 13th Royal Spyness Mystery book, so a mystery is inevitable, recalling the cliché Busman’s Honeymoon.

They have a long journey ahead, and Georgie is alarmed at the “rather small and frail” size of the “aeroplanes lined up on the tarmac.”

“Gol—Good heavens,” I said. “Are we going to fly all the way to Africa in one of those?”

“Oh no,” Darcy said. “From here we fly to Basel in Switzerland. Then we take a train overnight through Italy to Brindisi. From Brindisi it’s a flying boat to Alexandria. From there it’s a Handley Page Hannibal to Cairo, Khartoum, Juba and finally Kisumu.”

Coincidentally, Mrs. Simpson, David’s paramour, is a fellow passenger for much of their itinerary. How odd. But Georgie brushes it off since “it was supposed to be a honeymoon [she’d] never forget.” Their destination is the White Highlands; they have an unparalleled view of the countryside from their train.

The track went along the edge of the lake and again I cried out aloud. The lake was covered in what looked like pink blossoms. But at the sound of the train they rose into the air—thousands of flamingos, flying in a dense pink cloud. This was truly a land of wonders. I was now really glad we had come.

The Kenyan highlands were a mecca for Europeans because, in 1902, the White Highlands were “officially reserved for the exclusive use of Europeans.” Something that didn’t end until 1961. The hedonistic Happy Valley set has been immortalized in recent years in memoirs, novels, and films, and Rhys Bowen does a marvelous job of plunging the shocked newlyweds into a hedonistic swirl of drugs, alcohol, and casual infidelity.

Freddie Blanchford, an acquaintance of Darcy’s, drives them to their destination, saying he “wangled an invitation for you with friends.” All good, yes?

As we approached the car he said to Darcy, in a lower voice, “It was good of you to come. I can’t tell you how glad I am that you’re here.”

Their car ride takes them past untamed nature and native villages, where “the sight of a group of round mud huts with thatched roofs and some naked African babies playing outside” reminded them they were far from home. Contrast that with their introduction to Diddy Ruocco, a “slender woman, wearing riding breeches and an open-necked shirt,” who tells them of the fun to be had. She promises them “lots of parties, and safaris, and polo of course.”

Georgie, ever persistent and curious, tackles her husband when they’re alone. What did Freddie mean? Darcy says he’s “on the trail of a jewel thief.” But this isn’t Georgie’s first rodeo safari either; by happenstance, she’ll be able to monitor Mrs. Simpson and David for Queen Mary. The Prince of Wales has asked Mrs. Simpson to join him for a little R&R, a respite from the “ghastly colonial tour” he’s stuck on.

Lord Cheriton, known as Bwana, rescues Georgie from a spot of bother. Bwana means “a boss or master,” and the overly jovial Cheriton embodies that role. He looks at Georgie “like the big bad wolf when Little Red Riding Hood stepped into the cottage.” It gets worse.

I felt the hand round my waist move upward until it was distinctly touching the underside of my breast. I could sense him giving me an inquiring look as to whether I was enjoying this or not. Now I was completely embarrassed and not sure what to do … I was about to channel my great-grandmother and let him know that I was not amused when we heard fast-moving footsteps heading our way.

Georgie’s timely rescue by a young African man obviates her adopting the persona of Queen Victoria. Joseph is the man’s Christian name, but he tells Georgie that he also has a Maasai name.

“So you’re a Massai? That’s very different from a Kikuyu, is it?”

“Very different,” he said. “We are the first owners of this land. Before Kikuyu. Before white people. We are warriors. To be a Maasai warrior a boy must prove himself by fighting and killing a lion with his spear.”

Their first dinner party consists of gossip, gin and tonics made up mostly of gin, and to Georgie’s horror, Bwana Cheriton putting the moves on her. She asks her husband to take her home right away, saying she has an altitude headache. They slip away early one morning, drinking in the stunning landscape until they see a car blocking their way. The car is still running. Georgie starts to get an uneasy feeling, particularly when they spot a vulture on the running board. Not good. They see more vultures and then “a body, or the remains of a body,” facedown on the grass.

“Who is it?” I asked. And then I saw. Something had already fed on the body but I recognized that blond hair and how it curled, a little long, at the back of his neck. Something had eaten Bwana Hartley, Lord Cheriton.

Like an Agatha Christie mystery, there are many people who have a reason to dislike and despise the late Lord Cheriton. A little ruefully, the newlyweds set out to solve the mystery, as it’s surely not the honeymoon they hoped for. Rhys Bowen weaves the barely perceptible tension between the African servants (some enduring almost slave-like conditions) and their European masters into her fascinating story of murder in a unique time and place that’s occupied by a vivid cast of characters. Readers will appreciate Bowen’s willingness to stretch the limits of her series to examine the attitudes and mores of a troubled period.