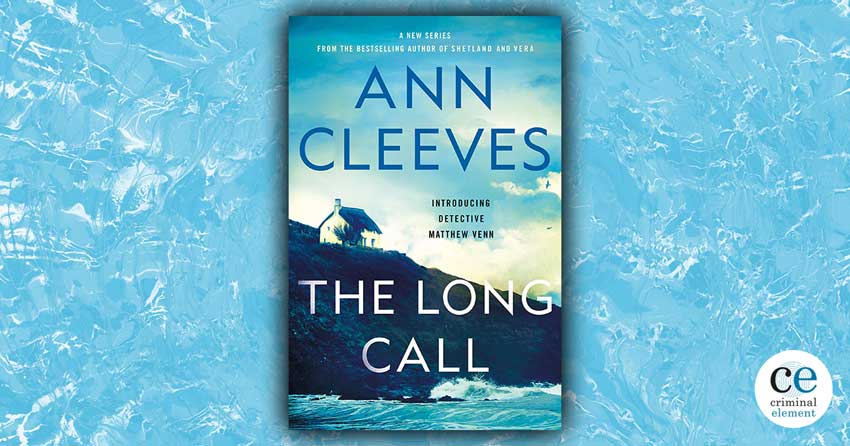 The Long Call by Ann Cleeves―bestselling and award-winning author of the Vera and Shetland series, both of which are hit TV shows―is the first in the gripping new Two Rivers series set in North Devon and featuring Detective Inspector Matthew Venn.

It’s cause for rejoicing when British mystery writer Ann Cleeves gifts us with a new series. The Long Call is the first of her two-part Two Rivers series set in North Devon. The two rivers are the Taw and Torridge. As a teenager, Ann Cleeves lived in North Devon, and that familiarity infuses The Long Call with accuracy and a certain nostalgia, particularly since Detective Inspector Matthew Venn has to revisit his past in the course of the investigation.

The opening is so bleak.

The day they found the body on the shore, Matthew Venn was already haunted by thoughts of death and dying. He stood outside the North Devon Crematorium on the outskirts of Barnstaple, a bed of purple crocus spread like a pool at his feet, and he watched from a distance as the hearse carried his father to the chapel of rest.

Why isn’t the dead man’s son inside the chapel properly mourning his father alongside the congregation? Matthew moves close enough to the open doors to hear the words of the service. He recognizes Dennis Salter’s “passionate tone of a voice.” He pictures the organist “bent double over the keys, dressed entirely in black, hands like claws, a nose like a beak.” When Matthew was a child, “he’d been a member of the Barum Brethren by birth and commitment,” and his estrangement from the oppressive evangelical faith of his father impacts his detective work.

He’s flaked out against “the perimeter wall of the cemetery” when his constable, Ross May, calls him. Cleeves skewers characters like an entomologist pinning a butterfly. Rugby player Ross is a “pacer and a shouter, a pumper of iron” and a “team player except, it seemed when he was at work.” A damning portrait in two sentences. Ross tells his boss to get back because “someone’s found a body on the beach at Crow Point,” where Matthew lives.

When Matthew hit the marsh, the sky widened and his mood lifted, just as it always did. If he still believed in the Almighty, he’d have thought his response to the space and light a religious experience.

There’s no serenity in a death scene; the corpse “lay out on his back on the sand, and Matthew could see the stab wound in the chest, the bloodstained clothing.” He spots a “subtly drawn” tattoo of a bird on the man’s neck. Matthew speaks to the officer on the scene and learns that a dog-walker spotted the body and that the elderly couple that live on the beach are champing at the bit to learn all the details.

Matthew can see his house, Spindrift, in the distance. “A family home though they had no family yet.” It’s a sign of Matthew’s equanimity or phlegmatic nature that he bought a place on the cheap “because it was prone to flooding,” thus making it affordable. These details not only heighten our interest in the protagonist but also impact the investigation.

He’d left the window down and now he could hear the surf on the beach and the cry of a herring gull, the sound naturalists named the long call, the cry which always sounded to him like an inarticulate how of pain. These were the noises of home.

It’s difficult for Matthew to deal with a corpse figuratively on his front stoop when his home and his husband are his refuge. He spots Jonathan through the kitchen window and marvels at their relationship.

Jonathan, his husband and love of his life, the endless optimist, who had lifted him from depression and brought him to what felt like home. He still wasn’t sure what Jonathan had seen in him, how they could be so happy.

Love in all its complicated permutations—like the love of Maurice, father to Lucy, his disabled daughter—weaves thematically through The Long Call.

The detectives eventually learn the identity of the victim: Simon Walden, described as a “lost sheep” by his flatmate, Gaby Henry. Ilfracombe, Simon’s home, was once a “grand seaside resort,” but with the advent of cheap flights to sunny European locales, “the place was trying to find a new role.” The neighborhood is a volatile mix of gentrification, earnest charities, and down-on-their-luck addicts. Nothing is obvious about why Simon Walden was murdered, which discourages Matthew no end, especially since a young woman goes missing.

He felt the old insecurity biting at his heels, telling him he was useless, an imposter in the role of Senior Investigating Officer.

Matthew’s carefulness, patience, and humility supersede his insecurities. He may not be “flashy or showy,” but he knows his community well. The Long Call is a complicated mystery full of red herrings and tempting segues. At its core are hubris and dark, hidden desires. Unraveling the secrets of Simon Walden’s life and death takes Matthew Venn deep into long-suppressed childhood memories.

It has been 20 years since Ann Cleeves embarked on a new series, but The Long Call was worth the wait.