Book Review: The Liar in the Library by Simon Brett 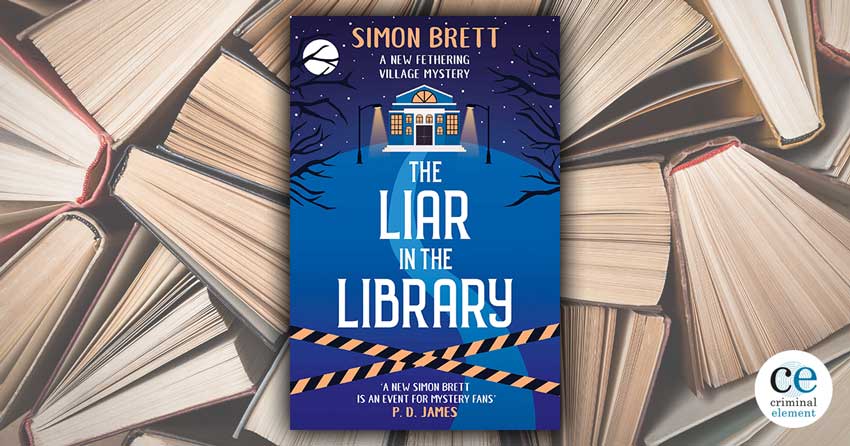 The Liar in the Library by Simon Brett is the 18th book in the Feathering Village Mystery series with prim and proper Carole Seddon and Jude, the bohemian healer with a colorful past. Despite their differences, they make for an unbeatable, amateur sleuthing team and their skills are needed now more than ever.

The Liar in the Library is a village mystery with a plot that relies heavily on the conventions of Golden Age mysteries like those written by Agatha Christie and Dorothy L. Sayers. It’s the 18th book in Simon Brett’s Fethering Mysteries—the first being The Body on the Beach, published in 2000.

Showing a keen sense of irony from the start, Brett’s English seaside town of Fethering is fictional, but it’s “not far from Tarring” in the South Downs. The Body on the Beach introduced next-door neighbors and partners in detection Carole Seddon and Jude Nicholls. On the surface, they don’t have much in common: Carole’s a sensible, insular, retired civil servant, while Jude works as a healer (after “having had a portfolio of careers including model, actress, and restauranteur”).

Yet the chalk and cheese somehow blended. And perhaps the strongest bond between Carole and Judith was their mutual passion for solving crimes.

Successful author Burton St Clair is lecturing and signing books at the Fethering Library. Twenty years ago, Jude knew him as “Al (short for Albert) Sinclair.” At the time, he was married to his first wife, Megan, and living in shabby-genteel Morden on the outskirts of London. Jude remembers Burton as a habitual philanderer, but “Jude was by nature a generous woman and prepared to take at face value that evening’s assertion that Burton had found emotional stability with his new wife.” If that were true, Jude thinks, “she wouldn’t have to face the tedious necessity of deterring his wandering hands.”

Jude is impressed, despite herself, by St Clair’s “fluent” presentation, even though many of his anecdotes are familiar.

He certainly held the literary ladies of Fethering in the palm of his hand. They had already been predisposed towards him. Probably every one of them had read his breakthrough novel, Stray Leaves in Autumn, whose paperback cover was so prominently displayed on the screen behind him. Why that book had caught the zeitgeist in the way it had, nobody could tell.

Jude has a theory about why it is a success, “It was because Stray Leaves in Autumn was, at its most basic, an old-fashioned romance.” And a “rather mawkish” romance at that. Things get interesting when it’s time for questions. An ill-assorted cast of characters peppers St Clair with inquiries, not all of which are pertinent or polite.

A gentleman who speaks with “the ease of having been to the right schools and university” zeroes in on St Clair’s somewhat disparaging comments about crime fiction and, specifically, crime writers. He quotes St Clair’s words back to him, “… when you said you were not in the business ‘as a crime writer might be—of killing people simply for the convenience of my plots’.”

“And I stand by that. Though plot is significant in any kind of story-telling, in literary fiction it does not have the primacy that it does in crime fiction.”

“Are you talking here about Golden Age crime fiction or more contemporary stuff?”

“Does it make much difference?” asked Burton St Clair loftily.

“Oh, so you’re saying all crime fiction is an inferior genre?”

“I’m not saying ‘inferior’,” said Burton, though he clearly was.

The two men do not agree to disagree. Although St Clair is anxious to leave crime fiction behind, a woman enters the fray. She’s “inordinately tall and expensively dressed” and speaks with “the relaxed refinement of an East Coast American intellectual.” And wouldn’t you know, she’s an expert on the Golden Age of classic mysteries.

The questions mercifully end, and the crowd heads to the drinks table. Librarian Di Thompson finally shuts down the festivities. She’s exhausted, and the bad weather outside matches her mood. Poor Jude has a half-mile walk home in the driving rain. St Clair offers to give her a lift in his new “Beamer.” She tells him she’ll provide directions.

“With you, Jude, I don’t need any directions.”

His left arm was suddenly around her shoulders. His right had found its way under the jacket to her breasts.

The handsy leopard hasn’t changed his spots after all. One “stinging slap to Burton’s cheek” later and Jude makes her sodden way home to Woodside Cottage. She doesn’t sleep well, so she welcomes a coffee visit from Carole the next morning. They are interrupted by a ringing doorbell.

“Good morning,” said the woman. “Are you Jude Nicholls?”

“I’m Detective Inspector Rollins, and this is Detective Sergeant Knight. We would like to talk to you about the death of Burton St Clair.”

Everyone knows the last person to see a murder victim is the killer—well, at least a prime suspect. A conceit of the Golden Age of crime fiction is that the writer gathers all the suspects in one spot—a country house, a church service, and in this case, a literary evening—and the investigation focuses on them. Carole and Jude diligently track down who in the audience at the library evening is connected to Burton St Clair.

They stop at the Crown & Anchor, Fethering’s local watering hole, where landlord Ted Crisp says that “everyone had their own view of what had happened.” In fact, an American woman told him that “this kind of murder is almost always domestic, and it always starts with the husband having an affair.” The professorial American provides Crisp with the acronyms HKW and WKM (Husband Kills Wife and Wife Kills Mistress). Carole tartly notes that, in this case, “It’s the husband who got killed.”

Jude gets a call from Oliver Parsons, the erudite man who questioned St Clair on his disdain for crime fiction. They join heads to puzzle out who killed St Clair. Parsons is wistful for the days when amateur detectives like Lord Peter Wimsey had a pipeline to the police.

“Oh, if only we were back in the Golden Age—Lord Peter Wimsey is lacking a vital forensic detail and Inspector Parker, tugging his metaphorical forelock, immediately shares with him the findings of the police post-mortem. Don’t get that kind of co-operation now. Police no longer know their place. They are even … ‘he chuckled as he framed the witticism’… getting ideas above their station.”

The Liar in the Library is a puzzle, but Simon Brett plays fair. All the pieces are right in front of the reader. After you finish, you’ll be tempted to pick up a classic from the Golden Age.