November 8, 2019
Will Thomas's Lethal Pursuit is the 11th book in the Barker & Llewelyn series. The setting is London, 1892—Cyrus Barker is brought into a game of international espionage by the Prime Minister himself. 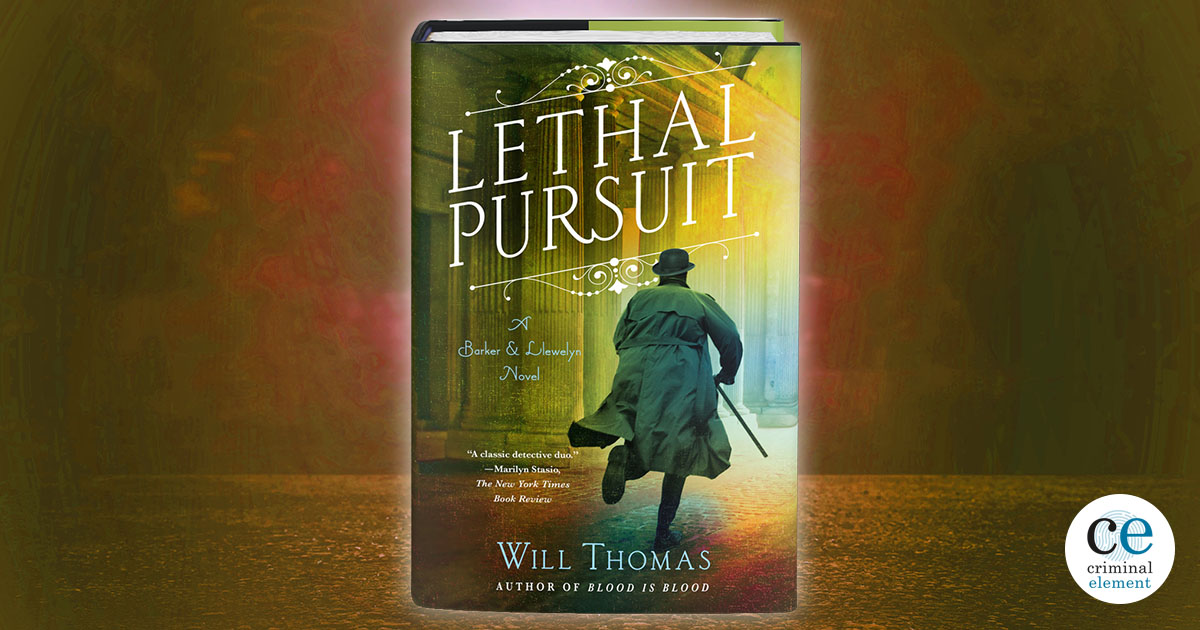 The express from Dover was still coming to a stop when Hillary Drummond leaped onto the platform. He staggered a moment, coming close to falling, but righted himself, balanced like a tightrope walker, with a suitcase in one hand and a satchel in the other. Once assured of his footing, he began to sprint along the platform at Charing Cross Station, heedless of the scores of men and women judging him for his lack of decorum. Drummond cared not a whit for their scandalized glances. After all, no one was trying to kill any of them.

With a clandestine chase across Victorian London that ends in blood and death, the newest Barker and Llewelyn adventure is off to start worthy of James Bond or Jason Bourne.

Hillary Drummond, one of England’s most accomplished Foreign Office agents, has been murdered mere feet from Scotland Yard. The murderer’s motive: Drummond had a stolen satchel containing a priceless religious artifact.

Unfortunately for the murderer, Drummond had already stashed the prize.

And, perhaps unfortunately for private enquiry agents Cyrus Barker and Thomas Llewelyn, the Prime Minister now wants them to finish the spy’s task and deliver the satchel to Vatican agents in Calais.

“Your Excellency, we are a humble agency. We have but two men, perhaps four if I can muster them. You have the Foreign, the Home, and the Colonial Offices at your disposal. You have Scotland Yard. You have the best army and navy in the world. Why would you choose us?”

“A private agency will be more difficult to spot than the more obvious government agencies. You are the last men they would expect.”

One of the Guv’s eyebrows peeked over the hill of his dark spectacles. “The last they would expect? Why, pray tell?”

“Because, sir, you would not be an agency our government would naturally choose. The commissioner of the Metropolitan Police despises you. You have a poor reputation among the Home and Foreign Offices. Your methods are considered unorthodox, haphazard, and impulsive. Most of your cases end in bloodshed.”

“…On the other hand, they admit you have a reputation for being successful in most of your endeavors and many detectives in London consider you worthy of respect. Somehow you managed to be both highly successful and a general risk at the same time.”

“Which is exactly the sort of agency you were looking for.”

Barker accepts the job—and then proceeds to do the exact opposite of his orders. Rather than immediately board a train and then ferry to France, the inscrutable enquiry agent dawdles at the agency… Puts the satchel into a bank vault only to later smuggle it out for a professor to translate… Sets about tweaking the noses of Scotland Yard, the Foreign Office, the Church, various suspicious Germans, and the Prime Minister himself…

Our narrator Llewelyn isn’t entirely comfortable with all of this rule-breaking and inaction, but as a now-official partner in the agency, he feels obligated to follow Barker’s lead.

“Confess, Barker,” Munro said. “You were investigating the death of Hillary Drummond, which is Scotland Yard’s duty.”

“How well are you coming along?” I asked.

Very well. Perhaps that was not the most politic thing to say. Munro seemed to think so. He sprang up and had a hand clamped around the back of my neck before I could think. He moved quickly for a man with too many social banquets in his system.

Besides: with Barker around, things never stay dull for long. In the course of a few short days the partners are thwarting attacks by mysterious youths in blue coats and the racist grandstanding of tent revivalist preachers. They’re fending off greedy millionaire collectors and one-armed German aristocrats. They’re engaging in figurative fencing with the English government and literal fencing during street-wide brawls.

And, as if all of that wasn’t enough, there’s secret society business to handle and familial tensions for Llewelyn’s new bride, Rebecca.

That Thomas (the author, not the narrator) can interweave so much action and espionage into a cohesive tale brimming with thrills, snarky humor, and rich history is impressive.

Even more impressive: this is the eleventh adventure starring Barker and Llewelyn and it’s just as fun and exciting as the previous installments. It’s no simple task keeping a set of characters fresh and interesting this far into a series, and Thomas makes it look easy.

While we the readers are kept in the dark just as much as Llewelyn, leaving most of Barker’s cleverest deductions and actions to be unveiled in the epilogue by the enigmatic man himself, that’s not really a flaw.

Unlike most mysteries, a Barker and Llewelyn story isn’t one you necessarily want or need to unravel yourself. Thomas makes the journey itself, the unexpected detours and sudden surprises, the real reward. Sometimes it’s just nice to let a novel carry you along like a boat in a current, admiring the scenery and stellar conversation while someone else does the steering or rowing.

With colorful characters old and new, a rich sense of time and place, an eccentric and unpredictable hero, and a narrator who often elicits chuckles or outright laughter with his droll observations, Lethal Pursuit is another charming winner from Will Thomas. One of the most cinematic of mystery series, this installment has both the tension and stakes of a serious spy mission and the madcap fun of a Punch and Judy show.